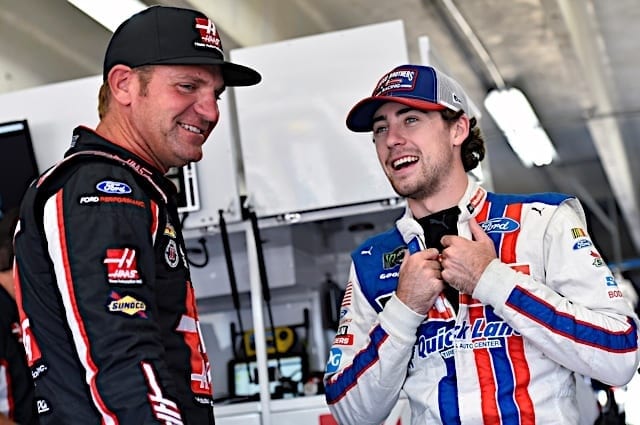 There are just seven races left for the Monster Energy NASCAR Cup Series drivers to earn a spot in the season playoffs, and with 11 in on race wins, the competition for the five remaining spots is hot and heavy.

A few drivers—Kyle Busch, Chase Elliott and Jamie McMurray—look like they’ll make it in on points unless there’s a rash of other winners in the next month and a half.

That’s unlikely, but here are a few who need a win to solidify a berth and could get one.

While it’s not likely that all five will find themselves in the championship hunt, anyone on this list certainly can, and it’s a good possibility that one of them will.

If the playoffs started today, Clint Bowyer would squeeze in.  But they don’t start today, and all it would take to knock Bowyer off his perch is one more winner behind him in points or for someone to pass him in the standings (he’s only got a couple of points over Matt Kenseth right now) and he’s toast.

Why he can win: Bowyer has eight Cup wins, including two at Richmond Raceway, the track that will ultimately decide the playoff field.  He’s shown speed this year and has a handful of top fives and top 10s.  He’s been clutch in the past.

Why he might not: Bowyer hasn’t won a race since 2012, when he drove for Michael Waltrip Racing, a team that was on the rise until a cheating scandal at Richmond — that Bowyer was at the center of — ultimately cost it sponsors and the eventual demise of the organization.  Bowyer endured a miserable year in 2016 at HScott Motorsports waiting for his seat at Stewart-Haas Racing to open up, and while he’s done well in the No. 14, it’s a team that’s struggled the last couple of seasons and has been largely inconsistent

Where it could happen: Richmond.  Bowyer has two wins there, and four of his eight wins came at tracks a mile or less.

Joey Logano has a win this year (Richmond), which should make him a lock… except his No. 22 car failed postrace inspection for a rear suspension issue, making the win encumbered, so it can’t be used for a playoff bid.  Logano’s out on points right now, with both Kenseth and Bowyer ahead of him.

Why he can win: Logano can win just about anywhere. Teammate Brad Keselowski has two wins this season, and Team Penske driver Ryan Blaney has one as well with affiliate team Wood Brothers Racing.  They’re strong.  Logano has 18 Cup wins, and he’s only 27 years old. That’s three times as many wins as Jimmie Johnson had at that age.  Not that that means much in a year where Logano is struggling a bit, but with wins at five of the seven tracks the series visits before the playoffs, he can certainly get one.

Why he might not: Since his win at Richmond, Logano has struggled at times, posting just two top-10 finishes. His average finish is five positions lower than in 2016. It’s not Logano’s best year, and he’s got no momentum at all heading into the most critical stretch of his season.

Where it could happen: Bristol Motor Speedway, Michigan International Speedway, Richmond. Logano has two wins apiece at these tracks, including the win at Richmond this spring and one at Michigan last season.

Erik Jones and Daniel Suarez are swapping the rookie of the year lead back and forth on about a weekly basis, and both have led a handful of laps this season. Both have been so close in terms of what they’ve shown, it’s hard to pick a clear favorite between them.  It’s unlikely that both will win a race and make the playoffs, but one is not a stretch, and it’s too close to call in terms of which one will win first.  Jones has a bit more experience than Suarez with one more year in the XFINITY Series, but they’re pretty equal in Cup competition on that front.

Why they can win: Both youngsters are no stranger to winning in NASCAR’s lower ranks, and both have shown the ability to run with the Cup stars as well and are showing it more as the season wears on and they learn the cars and tracks.  It’s not so much about the playoffs as it is about either driver being ready to take his first win this season.  They’re both getting there.

Why they might not: They’re rookies. First-year drivers have won races and made the playoffs, but it’s not something that should be expected of them.  Both drivers are coming along fine, and there’s zero need to rush anything.  They might need a little more seasoning before they’re weekly contenders, even if a one-off win is a possibility for either one.

Where it could happen: Jones: Pocono Raceway or Bristol.  His best Cup finish to date came at Pocono in June, and he has two XFINITY wins at Bristol.  Suarez: Michigan. He has an NXS win there, and the flat tracks have been his strength.

Kenseth is out of a ride at the end of the season, and he’s 45 years old, one of the oldest regular competitors on the circuit.  But you know the saying about old age and treachery, right? That fits Kenseth to a T.  Since he was a rookie, Kenseth has been one of those drivers you don’t notice throughout a race until he’s at the front of the field and the laps are winding down.  He’s a surefire hall-of-famer with 38 career Cup wins.  As long as he’s in a halfway decent car, you don’t count out a driver of Kenseth’s caliber.

Why he can win: Again, you can’t count out Kenseth.  Ever.  Yes, he’s had terrible luck in 2017, but he’s won in 13 of his 18 Cup seasons.  He’s a Cup champion and the last to win it over an entire season of racing, a feat fans are unlikely to ever see again.  He’s a driver who’s there when it counts.

Why he might not: Two words: lame duck.  Kenseth is riding out the remainder of his time at Joe Gibbs Racing, which has just one win as an organization this season. He’s certainly not going to be a priority for JGR.

Where it could happen: Bristol or Michigan.  Kenseth has four wins at Bristol and three at MIS, though he also has two at Richmond and one at both Pocono and Darlington Raceway.  Basically he’s a threat anywhere except possibly Watkins Glen International.

The biggest longshot on the list for sure, but AJ Allmendinger has been in this position before and made the cut.  Teammate Chris Buescher had a surprise win last year, so it’s certainly possible for a smaller team to make a playoff appearance.

Why he can win: Watkins Glen is on the schedule.  Seriously, Allmendinger is an exceptional road racer, and in addition to his 2014 win at the Glen, he has an average finish of 9.4, best among all active drivers and fifth all time among drivers with five or more starts at the New York track. Also, Allmendinger has two career road-course starts in the XFINITY Series.  He also has two career road-course wins in the XFINITY Series.

Why he might not: Realistically, if it doesn’t happen at the Glen, it’s not happening. Allmendinger and JTG Daugherty Racing have made big gains on the ovals, but they’re not quite at a level where a win appears imminent.

Where it could happen: Watkins Glen.  Because road course.

Why does the title of this article specify “5 drivers” when there are 6 drivers listed in the actual article?

Brian
Reply to  Bill B

It does not actually specify 5 drivers it is Frontstretch 5: Drivers who need a win….
This is typically a 5 item listing on topic of the day and the author lumped together the two primary rookies into one item and essentially included why in the paragraph as they both seem fairly similar in what they need to do and how they have performed this season.