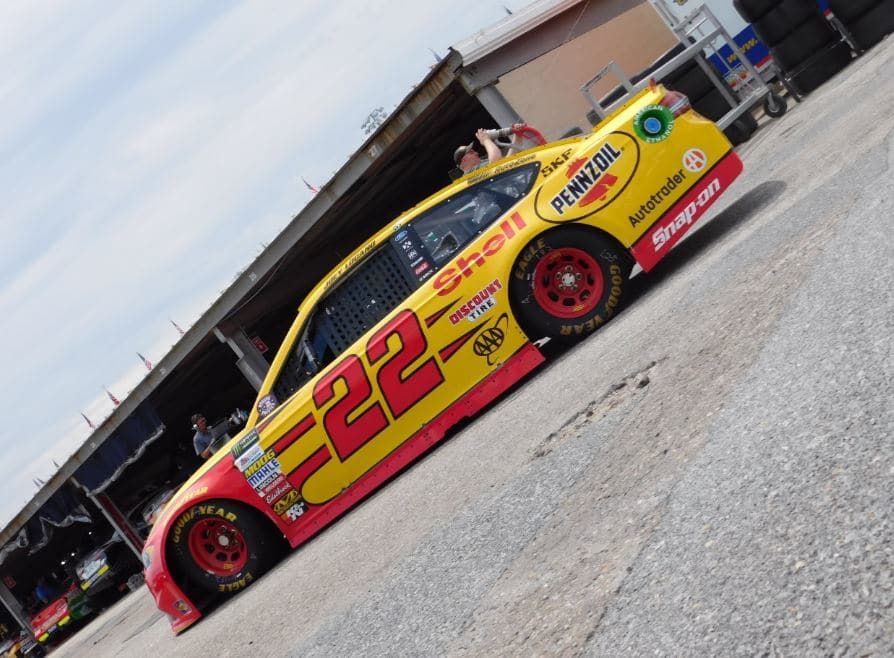 Joey Logano and the No. 22 team have one win this season at Richmond Raceway that is labeled as “encumbered” due to failing post-race inspection. This stipulation means that the team can not use the win as a ticket to the 2017 playoffs. With seven races remaining in the regular season, Logano sits 17th in the standings, 52 points behind the final spot, occupied by Matt Kenseth.

Will Logano and the No. 22 team make the playoffs this season?

Joey Logano isn’t going to make the playoffs this season. If you told me that at Daytona in February, I would’ve laughed at you, told you to stop drinking so much and walked away.

“It is not good, at all,” Logano told NBC after finishing 37th at New Hampshire this past weekend. “Right now, we are in the position where we have to execute. We have to finish the best as possible, and we didn’t do that today. We have to go back to work and make sure our cars stay together, and we have to get faster […] hopefully, we can get some speed enough to squeak a win out before the playoffs.”

I can see the writing on the wall. Hopefully, squeak and have to get faster, aren’t words a driver is using when they have confidence in their equipment, and right now, Logano isn’t confident in the No. 22’s ability to run up front every week. And why would be be?

We were in a spot two times last year in the playoffs where we needed to win and we can do it again this year to get in.

Logano is right. The No. 22 team has had its back up against a wall before and it’s come through. But there’s one big difference between those times and this time.

I understand luck has a big factor in Logano’s lack of success in the summer months, but the speed is just not there right now for Team Penske like it has been.

Brad Keselowski has led zero laps and finished outside the top 30 four times since Richmond. And Ryan Blaney, who for all intents and purposes is in a third Penske car at Wood Brothers Racing, has tapered off since his win at Pocono Raceway. The No. 21 has three finishes outside the top 15.

Plus, let’s look ahead of Logano. Matt Kenseth occupies the final playoff spot by 52 points, which is over en entire race (assuming Logano doesn’t sweep all three stages). If Kenseth can run top 15 at worst every week until Richmond, which he absolutely can (and will) do, he’s in.

Clint Bowyer has a hearty 54-point gap on the 17th-place Logano. Jamie McMurray has a 100-point gap. Chase Elliott is up by 115 points, and Kyle Busch is a lock, barring a new winner every weekend before the cutoff. Everyone else ahead of those guys has at least one win, meaning they’re locked in.

Let’s also take a look at his stats at the upcoming tracks before the playoffs, shall we?

At Indianapolis, his average finish is 13th. Pocono: 17th. Watkins Glen: 13th. Michigan: 12th. Bristol: 17th. Darlington: 18th. Richmond: 13th. Even though his numbers have steadily improved at almost all of those tracks throughout his career, anything other than Victory Lane isn’t good enough. Plus, with the organization failing to keep pace with the likes of Furniture Row Racing, Stewart-Haas Racing, Hendrick Motorsports, etc., his climb up the mountain looks tougher than it’s ever been.

Let’s face the facts: Logano needs to win. He knows it, crew chief Todd Gordon knows it, the entire No. 22 team knows it, and everybody in the garage knows it.

It’s too early to say that Stewart-Haas Racing has taken over the mantle with the blue oval as the “top dog,” but Team Penske is falling rather quickly. And if they don’t improve their performance, they can be looking at two early exits from the postseason, and one of their premier drivers not even qualifying.

Unfortunately for Logano, it looks like he won’t have a shot for the title in Miami this season. Which is crazy to think, considering the 27-year-old has made the championship four twice and might have been a poor pit stop and faulty jack away from a title. But hey, crazier things have happened, right? After all, one win and my argument is moot. But frankly, I don’t see that coming close to happening.

Logano is an elite driver, and that is what elite drivers do: they deliver when the deck is stacked against them.

I realize that things look pretty grim for the No. 22 team at the moment. A 52-point deficit and an asterisk next to his Richmond Raceway win currently have him way on the outside looking in.

Many believe that the No. 22 Ford has to win a race legally to make the playoffs, but I disagree.

How did Logano fall 52 points behind Kenseth and 54 behind Bowyer for the final playoff spots? He had one bad day at New Hampshire Motor Speedway. The points margin was close enough to conquer prior to that race.

If Logano runs a consistent last seven races before the cutoff, a bad day for Kenseth or Bowyer would put him right back in the thick of things. The deficit is certainly surmountable.

Should someone outside of the playoffs steal a win to surpass Bowyer, Kenseth and Logano, or if Bowyer and Kenseth should win, then Logano must win a race to get in.

Even if that were to happen, I still feel that Logano is a clutch enough driver to deliver the playoff-clinching victory.

Last season, Logano had only won one race all season through the first 31 events. The Team Penske driver was taxed with must-win situations in the Round of 12 cutoff race at Talladega Superspeedway and the Round of 8 cutoff race at Phoenix International Raceway. Logano won both races en route to a spot in the Championship 4.

The 2015 Daytona 500 champion took to Twitter after Sunday’s race at New Hampshire to remind everyone of that feat.

We were in a spot two times last year in the playoffs where we needed to win and we can do it again this year to get in.

Logano was in the process of passing Carl Edwards for the Cup trophy at Homestead-Miami Speedway when Edwards came down on him and ruined both of their days. Logano performed well enough under pressure to win himself a title, and it was not his fault that he did not win it.

In 2015, Logano kicked off the season with a win at Daytona, but embarked on a 20-race winless streak after the race. It was not until August of that year when he snapped the streak with wins at Watkins Glen International and Bristol Motor Speedway to become the hottest driver heading in the playoffs.

Despite a bad start to his summer, do not sleep on Logano. Of his 16 wins at Team Penske, only one has ever come in the months of May, June and July. That one win was at the first race at Michigan International Speedway last year.

Since joining Penske, Logano always starts the season hot and finishes on fire, with a cold streak in the summer months. You know who else does that? Jimmie Johnson, and it has seemed to work out perfectly fine for him and his seven championships.

So expect Logano to win one, or several, of the next seven races. I’ve already said that he has previous wins at Watkins Glen, Michigan and Bristol, which are three of the seven final regular season races, but don’t forget that Logano won at Richmond earlier this season.

Yes, that win is encumbered because the No. 22 failed the post race inspection, but did the illegal modifications really make that big of a difference? His teammate Keselowski essentially dominated the race at Richmond, only to have Logano get around him at the end. The No. 2 passed inspection, so shouldn’t the Penske cars be fast at Richmond again?

Penske has been slow of late, but teams always have dry spells during every season. We were just talking about how much Joe Gibbs Racing was struggling. Now that Denny Hamlin won the first race for that team, everyone considers JGR a title contender. No team led by the legendary Roger Penske will ever stay down for long.

Logano will turn things around and make the playoffs. When he does, I fully expect everyone to flip their arguments to saying he could win the champion

Sure hope Logano makes it; love those Penske boys!

We, in my neck of the planet love the Penske boys too! What will be will be. With no help from NASCAR of course :) :) :)

…And I dare say NASCAR this season is not above being obvious with they want. The Penske cars and other Fords somehow found themselves the target of BRIAN and his minions, they did not like their aero, OF COURSE IT WAS NOT ILLEGAL, but they were told to knock it off. This fact has been circulating for months and now maybe a outlet or two will report and sugar coat….As “Fords need to catch up”!

Well, how is that to be when many Fords did well the beginning of the season. Many morons blame that lame part on Joey’s ENCUMBERED win as a result of him not up to par since then. NO..it is not, but that still circulates! The aero design that was approved, not deemed illegal is now gone per BRIAN it is. Will anybody in the Ford Camp finally come out with a true statement about this behind the scenes (as I understood it), not mentioned to the fans or general public. Instead the NASCAR BS is SOME TEAMS FINALLY GOT it, when this TEAM HAD IT (for the most part) in the beginning of the year. This season is wacky man, does Brian have TOYS payment due for DAYTONA RISING? Something stinks…