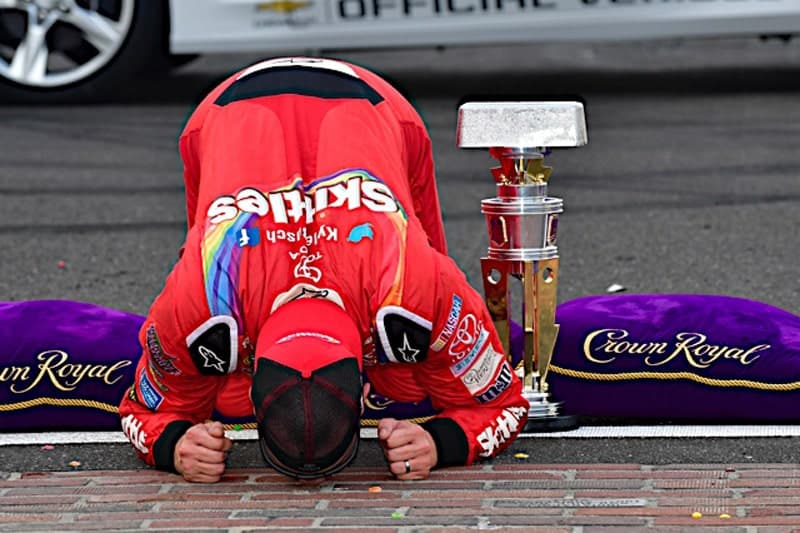 The Monster Energy NASCAR Cup Series heads to Indianapolis Motor Speedway for the Brantley Gilbert Big Machine Brickyard 400 this Sunday at 2:30 p.m. Your latest daily fantasy NASCAR showdown sees cars hit the track on Saturday at 9 a.m. for first practice, and then at 6:15 p.m. for Coors Light Pole Qualifying.

This week’s fantasy forecast is backed by DraftKings, the No. 1 platform for daily fantasy sports. You can jump in on all of the daily fantasy NASCAR action at Indianapolis this weekend by signing up here for a free entry into one of this weekend’s contests. All you have to do is make a $5 deposit to get started!

Truex once again dominated most of the race last weekend at New Hampshire. He was well out in front of the field for much of the day until a late caution stacked the field up. A poor restart with a little over 30 laps to go was the only reason the No. 78 team lost out on another win. He still managed a third-place finish and was one of the top scorers on DraftKings.

Truex has two straight top-10 finishes in the Brickyard 400, and another is to be expected. He should be the first driver looked at when creating a DraftKings lineup.

Busch cost himself a shot at his first win of the season with two pit road speeding penalties in the final stage of the race at New Hampshire. But even with a 12th-place finish, he gained enough points to be in the winning DraftKings lineup on Sunday.

Busch’s growing frustration with the team’s performance has been a big storyline throughout the year. Indianapolis has a strong chance of snapping the winless streak and turning around his season.

Larson has had to start in the back of the pack for two weeks in a row now and yet still managed consecutive second-place finishes. The No. 42 team is having trouble passing through tech during qualifying, which has led to disqualification and a last-place starting spot.

But the good thing about Larson is that he has proved that no matter where he starts, both car and driver perform well. That should translate to Indy, a track where Larson has finished inside the top 10 in all three career starts. There is no reason for that streak not to reach four in a row this weekend.

Logano is in a serious slump. His 37th-place finish at Loudon was his fifth result of 30th or worse this season. By comparison, Logano had four finishes of 30th or worse all of 2016. The No. 22 team just hasn’t had the speed that we are used to, putting them on the verge of missing the playoffs.

Luckily, Indianapolis has been a track where Logano has excelled. In the past four races, his worst finish was eighth place. Since joining Team Penske in 2013, his average finish here is 5.5, 7.1 positions better than his career average through eight total starts.

It is reasonable to be skeptical going forward with Logano. But if he shows good performance during practice this week, it should translate to the race. If he shows up with a top-10 car, make sure you add the No. 22 to your lineup.

For some reason, McMurray performs incredibly well at the crown jewel races. His seven wins have come at Daytona, Talladega, Charlotte, and Indianapolis. His lone win at Indy came back in 2010, but McMurray has still run well as of late. He has four straight top-20 finishes at the track.

With the success of his Chip Ganassi Racing teammate Larson as of late, McMurray may be worth the higher price tag. Again, he is a driver that will need some extra research into his practice speeds but the speed of the No. 42 team should rub off.

Bowyer recorded another top-10 finish last weekend at Loudon, bringing his total to eight on the year. Bowyer is on the brink of a playoff berth, but is still looking for that elusive win to lock him in.

His finish of 21st last season at Indy was the worst for Bowyer in 11 career attempts. He has an average finish of 13.5 with three top 10s, not too shabby considering his last few years of turmoil. His most recent top-10 finish was in 2015, running sixth with now-defunct Michael Waltrip Racing.

Stewart-Haas Racing as a whole has been on the uptick, which should continue this week. Look to Bowyer to lead the way.

While he doesn’t yet have a Monster Energy NASCAR Cup Series race under his belt at Indy, Suarez has made two starts here in the XFINITY Series. In 2015, he finished third while in 2016, he finished seventh.

Suarez tied a career high sixth-place finish last weekend at New Hampshire, one of a handful of Toyotas that performed well at the Magic Mile. This rookie has been improving week by week and is finally at a place where he should be on the daily fantasy radar.

Menard’s first and only career Cup Series win came at Indianapolis back in 2011, a pit strategy win when he fended off Jeff Gordon in the closing laps. Since then, Menard has finished inside the top 15 in four out of five Indy races (10th last season).

Menard has been a diamond in the rough recently in daily fantasy, aided by his third-place finish at Daytona three weeks ago. If he continues a recent streak of qualifying outside the top 20, it could give him a high ceiling when it comes to positive pass differential. 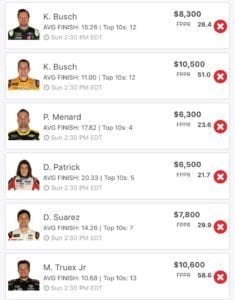