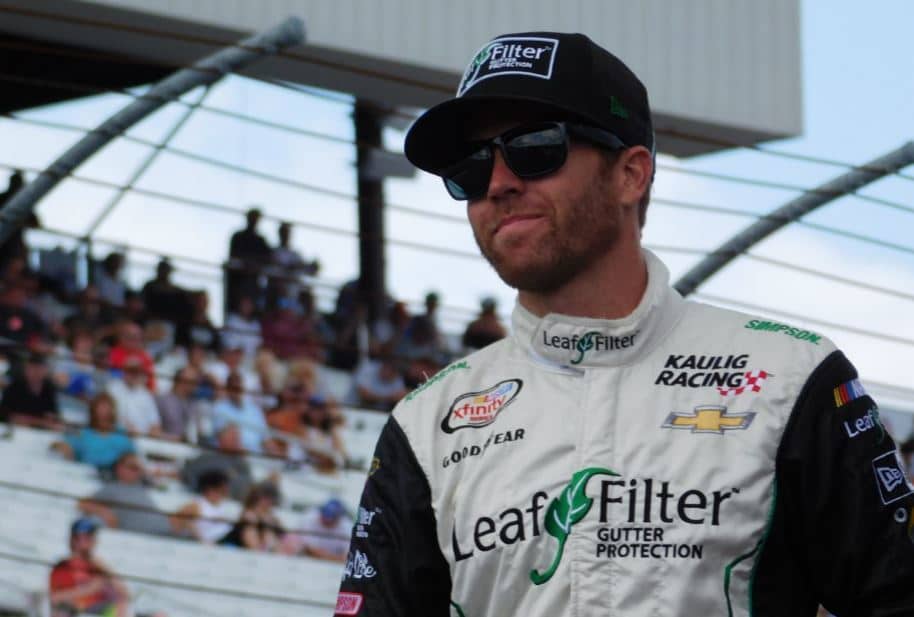 Matt Kaulig took a risk starting his own race team, Kaulig Racing, heading into the 2016 season. His choice of driver Blake Koch, who was at a crossroads in his career.

Prior to taking the ride, Koch spent seven partial seasons in the XFINITY Series, running a full schedule only in 2015, and finishing 17th in the championship standings. At Daytona International Speedway, the No. 11 team showed speed, qualifying and finishing ninth, with Koch recording his first career top-10 finish.

Fast forward a season-and-a-half later and Koch is sitting 11th on the playoff grid, 35 points above the cut-line. Missing the playoffs in 2017 would be a disappointment after the postseason Kaulig Racing had in 2016, finishing seventh in the standings.

Through 17 events in 2017, Koch has a solo top-10 finish (ninth) at Bristol Motor Speedway, but earned his first-career pole at Talladega Superspeedway and won the opening stage at Daytona, which awarded one playoff point.

“Our season has been going pretty good, other than having some bad luck and bad finishes,” Koch told Frontstretch at New Hampshire Motor Speedway. “But we’ve been running better than we were last year. People just tend to remember the last couple of races from last year, and how competitive we were, but this is a whole new rules package, so we’re trying to get a handle on the aero side.

“It’s early in the year, so it’s risk versus reward and keep the respect of your competitors until it really counts, and that’s when the playoffs start. But we’ve just had bad luck, either crashes or flat tires, stuff going on.”

Kaulig Racing has between 14 and 16 employees, but has a coveted technical alliance with Richard Childress Racing. Driving the same equipment as the three full-time RCR drivers, Koch is out-performing both Brendan Gaughan and Brandon Jones, who are on the verge of possibly missing the playoffs.

Stability was never a key to Koch’s rise up the ranks. In the seven partial seasons, the 31-year-old has competed for eight separate organizations before joining Kaulig Racing, and the two sides have seemed the perfect match.

“The most influential person,” Koch said of Kaulig. “Leaf Filter Gutter Protection took me on in 2014, they started sponsoring me with a couple Cup races [for Go Fas Racing] and then they did the full XFINITY schedule in 2015 [TriStar Motorsports].

“He started this race team in 2016 and in 2017 I was still with them. Before then, I was just trying to find a job every week, whether it was spotting, or driving someone’s motorhome, or stand-and-parking a truck or a car. Matt Kaulig has completely turned my career around.”

Though 2016 was just Koch’s second full season in the XFINITY Series, he still had 147 races under his belt. However, last year was a big learning curve.

“Last year felt like my rookie year and that I just started,” he said. “I got a lot of experience and a whole new outlook on it and I’m completely blessed and excited to be doing it.”

Leadership has been a quality that Koch and veteran crew chief Chris Rice have worked on since teaming up. Their energy outside the racecar is exuberant, though both lean on Kaulig for his direction.

Though Kaulig is relatively new to the racing business, he understands how to lead a team and crucial to the success of the second-year ogranization.

“He’s very hands on as far as his motivation, enthusiasm, and his leadership,” Koch said. “Also, just his ideas for the competition are big. He’s move involved than people think. Him being a quarterback for the Akron Zips in college, he’s big on teamwork and positive leadership and he brings a lot of that to Kaulig Racing.”

The alliance with RCR allows the team to work on the finer details that could benefit or derail a race team. The No. 11 crew gets chassis, bodies and ECR engines because of the technical partnership.

However, as teams look to evolve, it’s possible that one day Kaulig takes his efforts to the Cup Series, as has been done with other organizations. TriStar Motorsports started a Cup team this season with Cole Whitt, while GMS Racing is rumored to make the move next season.

Koch just hopes he is the driver, if the idea of moving to the Cup Series comes to fruition.

“It’s hard to see what five years down the road looks like for Kaulig Racing,” Koch said. “If you were to ask Matt Kaulig five years ago if he would own a race team, he would probably have said no. Life changes so much and so many things happen. Matt is such a good business guy and gets involved with great things that take off.

Though it seems like every driver’s dream is to compete competitively in the top division of motorsports, Koch is content staying in the XFINITY Series and competing toward the front of the field.

“Right now, I have no intentions on going to the Cup Series because I want to continuously run top five in the XFINITY Series and win some races, compete for the championship,” he said. “When I feel like we’re a championship caliber, race winning team, then naturally you will want to go up from there and that’s the Cup Series.”