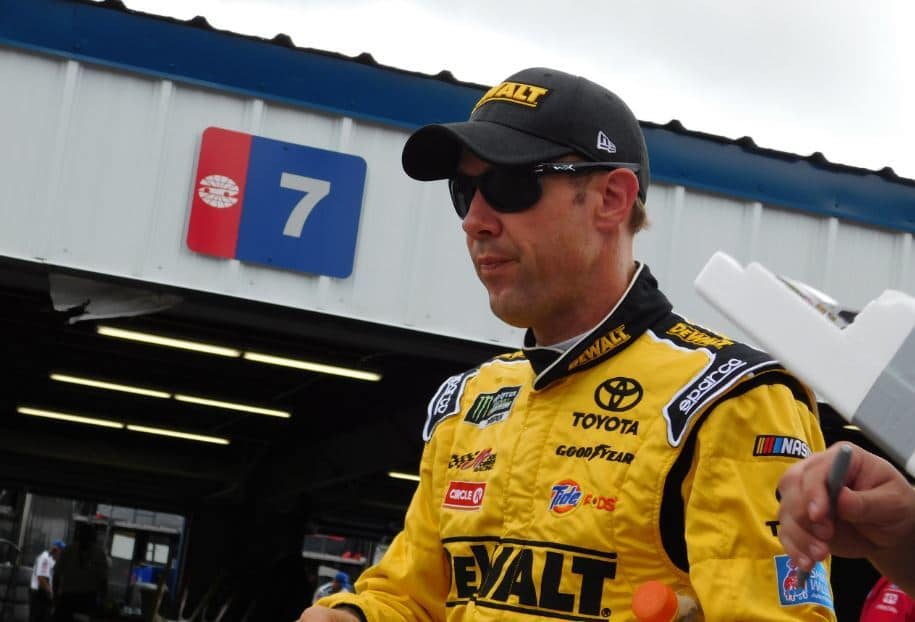 This past Sunday, Denny Hamlin did his best to slay whatever dragons are wreaking havoc in the Joe Gibbs team complex.  His win, the first of the year for the team, locked him into the playoffs while also making him the 12th different driver to win this season in the Monster Energy NASCAR Cup Series – though only 11 of those drivers are qualified for the playoffs as Joey Logano’s encumbered win doesn’t count.

The question, as has been made before, that arises is: how come Hamlin’s win isn’t considered encumbered?  After winning at New Hampshire, Hamlin made sure to burn his ride down, blowing out the tires and in doing so, blowing out the rear quarter-panels.  It’s pretty hard to check tolerances on a car after it’s been purposely trashed.

Whether you may be a fan of Formula 1 or not, they still get this aspect of the regulations right.  At the conclusion of the race the cars return to parc ferme so that they can be scrutineered to avoid any issues.  There’s no wild burnouts.  No backing the car into a wall and lighting up the tires.  Just a victory lap and park the car.

There’s been no aim to change anything about post-race practices and no reason to believe any are coming.  Oh well, there’s probably bigger things to worry about.

Happiness Is… Head Games.  One of the hot topics this week in the social media-sphere was the debate over 3 pm EST start times, with someone in the sport positing how it benefits the West Coast market, while fans from all over the country voiced their preference for more 1 p.m. green flags.  Dale Earnhardt Jr. sarcastically posted on his Twitter feed  that NASCAR needs to consider 5 a.m. times to cater to the Russian market.  Har har.  But something of significance did come from the Jr social media world this week.

His wife, Amy, stated that Earnhardt shouldn’t take the risk of racing in the Advance Auto Parts Clash on February 11, 2018, a race comprised of pole winners from the previous season.  Such an announcement is an interesting one, and in many ways a solid position.

While the sport would surely love to have Earnhardt in the race, there’s no reason to further risk his health for a race that would mean little in any regard.  Basically it’s a situation of all downside with minimal upside.  While Earnhardt has hinted at possibly running the Daytona 500 if things come together, racing something like the Clash is all folly, especially for a driver who seems to have a case of the yips lately.

This kind of attitude is also a display of the heightened sense toward driver safety.  As concussion research continues to develop and show statistical significance of how brain trauma has lasting and detrimental effects, the trickle-down in sports is manifesting itself as athletes take better care of themselves.  Any fan watching the Cup Series at this point has to question Earnhardt’s presence on that track at all anymore – it’s just a sense of compassion.

That’s a lot of turnover in the organization.  Stealing Igdalsky away from Pocono is the real coup of the situation as he has turned around the fortunes of the track in a major way over the past 10 years.  The hope that he might be able to do the same for other tracks or determine ways to bring fresh ideas and energy is what NASCAR pegged him for.  The hope that he will succeed as he moves from a localized position to a national one.

The other hires are also an indication that something wasn’t working in how NASCAR is presenting itself in the digital world.  Whether it be the content, access or overall presentation, such a move seems to establish that they are not doing enough.

These are all good things as these persons should be able to inculcate themselves as new voices in the groupthink at Daytona.  Whether or not they will make way on some of the fan concerns regarding how the playoffs work or things like start times or even minor aspects like the delays between stages is probably questionable but it may offer hope.

Happiness Is… Advertising.  For being a former champion and still driving at a high level, Matt Kenseth sure seems to be pounding the pavement to get a job.  His recent press conferences and interviews have all been sure to assert how he’s actively looking for a ride for next season.  Good for him, rather than keeping it behind the scenes he’s all out about it.

Kenseth’s situation is a far cry from those of recently retired drivers Jeff Gordon and Tony Stewart, who were both able to walk from the sport on their own terms.  His is a reminder that even champions have a sell-by date, especially when it comes to finding compatible sponsors – and it should be noted that part of his problem may be that sponsors may see a short-lived arrangement at best.  For fans of the robotic Kenseth, the hope has to be that he can land at a decent spot to conclude what should be a hall of fame career.

Totally agree about the idiotic burnouts, that nonsense should have been stopped a long ago for a variety of reasons, not the least of which is it makes stock car racing fans look like knuckle dragging neanderthals. Such a stupid display of wasting resources. Also agree with Earmhardt’s wife and good for her for putting the brakes on the idea of him risking himself further. And I really hope Kenseth gets a good ride to finish out his career, would love to see him go to Hendrick even though I’m not a Hendrick fan it would be great to see him have raced for all 3 manufacturers. He’s still a fast guy and with a better crew chief than he’s been saddled with at Gibbs he would have another championship from his first year there.

If I could change one thing about NASCAR, it would be to ban the burnouts. That’s for drag racing, and now that teams and drivers are so quite obviously doing it to hide their shenanigans from the inspectors, is far pastbtome to do away with it.

Tire changers smashing air guns. Gas men smashing fuel cans on pit wall. Crew chiefs ripping doors off of war wagon. Cool! When will they put a stop to it. Don’t agree with Mrs. JR though. He could fall off his bike and get a concussion. You can’t stop living your life and you can’t eliminate all the risks. Everything within reason.

Well Rick and his sponsors decided to make it a very talented trio that will lead HMS into the future. Matt wasn’t the future for the 88, in fact Matt at 46 isn’t the future for any team, especially without big sponsor dollars. NASCAR writers have been clueless and laughable with their picking Matt and Edwards for every seat that may or may not be open. Hey real writers, Edwards is happy and he’s gone, period. Wake up writers, talented though he is, what top team left will hire Matt with no sponsor. No feel good farewell tour for Matt, Haas needs sponsors, and I don’t see a top tier ride open. Everyone keeps saying furniture row second car, well they need sponsors too and may not even have another car.