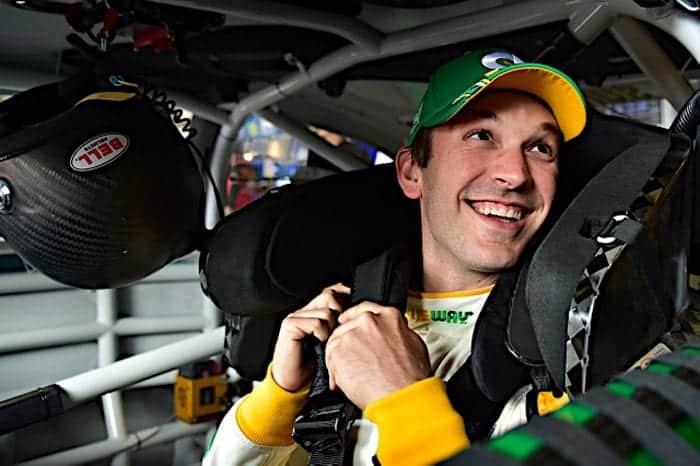 NASCAR is looking for some international flavor, and its diversity program is attempting to sway the sport in a direction similar to the Verizon IndyCar Series.

International stock car drivers are rare, and ones with the funding to bring them to America to race in one of NASCAR’s top three series is a feat that’s incredibly rare in 2017.

You would think that Monster Energy NASCAR Cup Series rookie and budding star Daniel Suarez would have been joined by more international stars at this point. Well, that’s what NASCAR wanted after he locked up the 2016 XFINITY Series title. But that’s not the case.

Last year, there were 27 international drivers spanning NASCAR’s top three divisions. However, in 2017, there are only 12 faces who were not born in America.

The number is expected to increase as the XFINITY Series and Camping World Truck Series arrive at a handful of road courses in the coming weeks. But with only one full-timer born and raised outside of America, the list of current international racers in NASCAR is limited, with several names who you won’t even recognize unless you thoroughly read our entry list stories each week.

1. Daniel Suarez, Mexico: Suarez’s rise in NASCAR is something the sport needs. His success story — as of now — is generating headlines south of the American border, and frankly, it’s been a long time coming. NASCAR invested heavily into its Mexican division until pulling the plug for a hot minute before realizing it was a stupid decision to not have NASCAR races in that nation. Now, Suarez is a three-time XFINITY Series winner, has a Truck Series win and is in the midst of a great battle for Rookie of the Year honors.

2. Stewart Friesen, Canada: Not many people knew who Friesen was when he made his NASCAR debut last year at Eldora Speedway. One year later, thanks to help from Tommy Baldwin, the letters above his door are quite familiar to those who follow the Truck Series, especially after this year’s edition of the Eldora Dirt Derby. Struggling to get adjusted to competition to start the year, he took a few races off. With a 12th-place finish at Kentucky, he followed it up with an outstanding run at Eldora, leading 93 laps en route to a runner-up finish.

3. Martin Roy, Canada: No announcer on Fox or NBC can ever pronounce this guy’s name right, and he’s been racing for five years. It’s embarrassing to see a lack of culture in the TV booth, but that’s another story for another time. Roy earned his first lead-lap finish at Auto Club Speedway, driving the No. 90 car in the XFINITY Series this year, so at least the Quebec native can knock that off his bucket list.

4. Mario Gosselin, Canada: The TireMonkey.com truck was never fast, but it was so awesome to look at. Gosselin has poured his heart and soul into racing in NASCAR, growing his team from a part-time Truck Series operation to a full-time one in the XFINITY Series. He’s only made two starts in 2017, but he’s always around with his No. 90 team.

5. Alex Labbe, Canada: Labbe joins the list of drivers to race for Gosselin this year. He’s been someone NASCAR has watched to see if he would develop into a guy who could succeed in America, and he’s certainly trying his hand at it. Bringing Can-Am, a Go Fas Racing sponsor on the Cup side, to the No. 90 team, Labbe running the full NASCAR Pinty’s Series schedule this year, along with a handful of XFINITY Series events.

6. DJ Kennington, Canada: If you watched the Daytona 500, you know Kennington did the impossible by just qualifying for the race, let alone running in the top 20 at one point. As he banged the roof of his No. 96 car after the qualifying race, it was clear that something special was happening. He raced the majority of the XFINITY Series schedule in 2008, but severely cut back on his schedule in America until 2017. Now, he’s running the Cup plate races and is still full-time in the Pinty’s Series at the age of 40.

7. Alon Day, Israel: NASCAR’s first Israeli driver has been well covered this year, with headlines throughout Israeli publications and even in the Sunday edition of the New York Times. Day made his Cup debut earlier this year at Sonoma Raceway with BK Racing, finishing a disappointing 32nd after an innocent spin led to major damage on an ensuing restart. He’ll be at Watkins Glen International, and is trying to put together funding to run the XFINITY Series road course races while the Whelen Euro Series is on break until the playoffs start.

8. Anthony Kumpen, Belgium: Kumpen made his XFINITY Series debut in 2015, running three races that season with Rick Ware Racing. He later moved up the ladder, getting to race in quality equipment for the Gdovic family in each of the last two season-openers at Daytona International Speedway. This year, he finished 22nd, and would have done better had he not overheated with 13 laps to go. It would be pretty sweet if he could bring NASCAR some Belgian waffles should funding be found to enable him to race full-time.

9. John Jackson, Scotland: Here’s another lad who’s taken quite the trip to race in NASCAR. Jackson has been racing part-time with back of the pack teams since 2011. He’s only been able to finish three of 23 events in the XFINITY Series and one out of 10 Truck Series contests, but he’s from Scotland, which is incredibly awesome.

10. Terry Jones, Canada: No, he’s not related to Erik Jones or Brandon Jones. This Jones, however, is from Ontario. The 45-year-old has been competing in the ARCA Racing Series since 2003, running as many as eight races in a season. He didn’t make the jump to NASCAR until 2010, and attempting at least one race each year since 2015. He even came close to winning the ARCA race at Daytona this year, coming home second to Austin Theriault.

11. Max Johnston, Australia: Kyle Larson’s crew chief? Nope. This guy is brand new to NASCAR. The Australian dirt racing star made his NASCAR debut at Eldora in a truck identical to Justin Allgaier’s XFINITY Series car. He was a breath of fresh air for a race that is usually full-on American, and it would be nice to have him back in the Truck Series.

12. Akinori Ogata, Japan: Ogata has been attempting to climb the NASCAR ladder since 2009, when he began racing in the Whelen All-American Series. However, he hasn’t been able to break through like he’s wanted. He made one start this year with Beaver Motorsports in the Truck Series, finishing 30th at Atlanta Motor Speedway. At least he brought Eneos into NASCAR, which is now a multi-race sponsor with Chip Ganassi Racing.