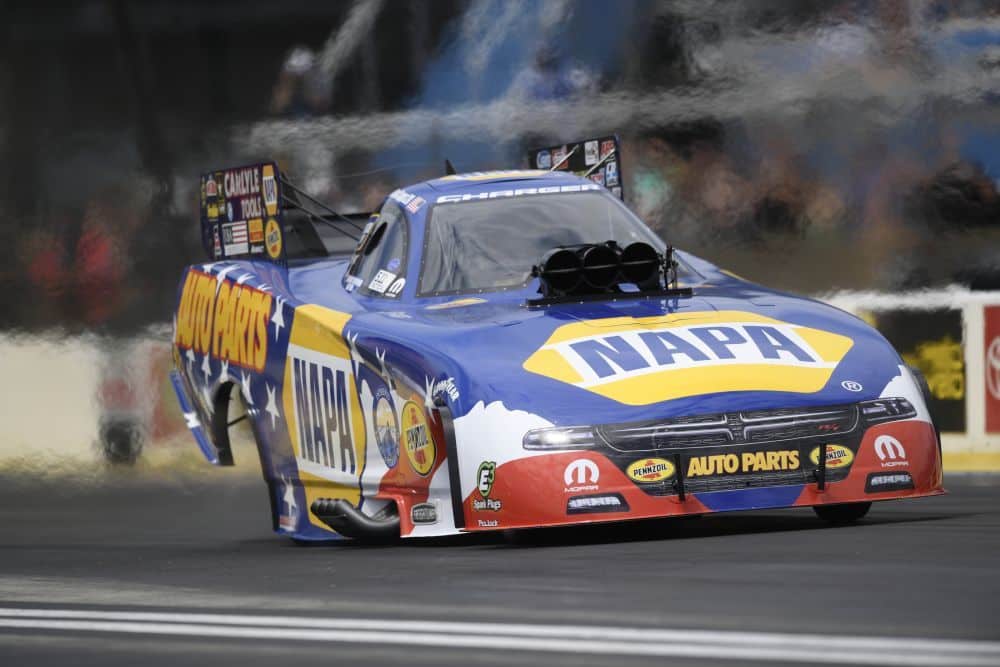 Time has a way of flying by when you are having a good time. Sometimes it flies by even faster when you are bumping up against a deadline with work left to do. This week marks the start of the annual Western Swing in NHRA. It’s also an indication that the regular season is drawing to a close as just five races remain until the field is set for the Countdown.

For teams sitting on big leads in the categories, this might be a good time to test a few things for the championship run. Steve Torrence, Ron Capps, Bo Butner and LE Tonglet lead the four Mello Yello series classes and they all have a triple digit lead. Torrence has the smallest margin at 101 points over second place Leah Pritchett. Ron Capps enjoys the most space with 186 over his teammate Matt Hagan. Like Capps, Butner also has a teammate behind him in Greg Anderson, and while it’s better to have a teammate there than not, neither driver really wants to give that top spot up, even to a team car.

As this stretch draws to a close, when the time arrives that they can no longer be passed by drivers behind them, there is nothing to lose by experimenting. Since the Countdown brings a points reset, the size of the lead they hold makes no difference. All leaders will still enter the Countdown with the same gap on the second place driver. The only thing that matters is making sure they stay in front.

For teams still trying to get above the cutoff line, it’s crunch time. They don’t have the opportunity to test new things because they need to do everything they can to make it in. Every single qualifying point and round win is huge. Sometimes their hopes also rely on the teams just above the cutoff line having some struggles. No one wants to wish ill on a competitor, but seeing them go out in round one a few times doesn’t hurt.

Shawn Langdon will have a tough road trying to make up the 69 points he’d need to catch 10th place Troy Coughlin, Jr., and Allen Johnson appears to be pretty safe on the bubble in Pro Stock as he holds 46 points over Shane Gray who is not racing full time. Funny Car and Pro Stock Motorcycle are a whole different story though. Cruz Pedregon is hardly safe with just three over Jim Campbell. Jonnie Lindberg trails Pedregon by five and Del Worsham by six. No margin for error there.

Angie Smith looms just a single point between Steve Johnson in the bike ranks. It’s pressure on both sides of the cutoff though. Johnson and Pedregon need to step it up and stay on their game if they want to hold on to a championship berth. Those on the other side of the line cannot make mistakes and need to work for everything they can to make their way in.

A Picture Is Worth A Thousand Words:

Some like it hot, but maybe not this hot. A few of the Mello Yello Series drivers have found the fire already this year.