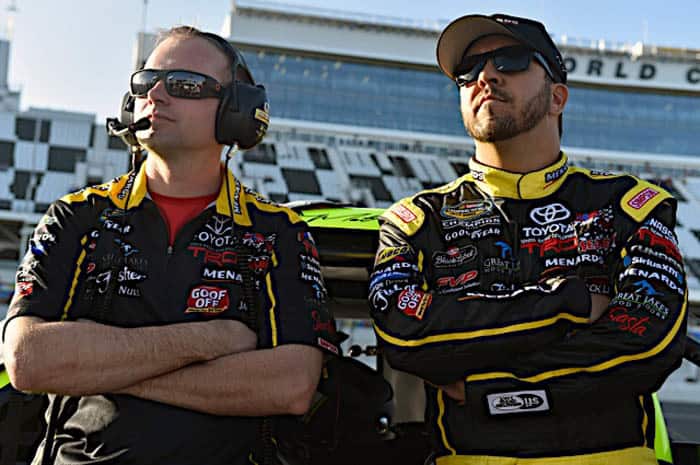 Crafton took advantage of a late-race restart to pass a dominant Friesen for the lead and held on to the top spot for the remaining 17 circuits en route to his first win since Charlotte last season. Chase Briscoe, Grant Enfinger and John Hunter Nemechek rounded out the top five.

Who Should Have Won: Friesen emerged a surprise favorite after running well in practice on Tuesday (July 18) and backing that up with the fastest qualifying lap on Wednesday afternoon. He won his heat race, starting on the pole for the main event and led 33 of the 40 laps in the first stage before relinquishing the lead to Crafton. He won the second stage and fell just 17 laps led short of scoring his first career victory. Friesen led a race-high 93 circuits but faded from the lead behind racewinner Crafton, whose truck came to life in the closing laps.

Eldora Speedway has never really been that kind to Johnny Sauter. He crashed out of the inaugural race at the track and has a best finish of eighth, hardly what you’d expect from the defending champion. Finishes of 29th, eighth, 13th and 21st don’t make one optimistic for a shot at Victory Lane for the driver of the No. 21 Chevrolet.

“Eldora is a little bit different situation, especially a guy for me that’s raced asphalt his whole life,” Sauter said in a NASCAR teleconference last week. “I think it’s a fun place, but for me it’s just a place where I just haven’t figured it out quite yet.”

Sauter started 14th Wednesday night and was promptly collected in a lap 20 accident that saw Sheldon Creed and Ben Rhodes spin after the two made contact. The wreck ultimately ended up involving nine trucks, though all were able to continue racing. Sauter also complained of his truck overheating at the time of that caution.

Though Sauter made an additional stop to clear mud from the grille, the overheating issues continued to plague the No. 21 team. Near the end of the first stage, the crew found a small hole in the radiator and elected to make a change, hoping to finish the race rather than posting a DNF.

Sauter praised his crew for their speed in repairing the truck, but the damage was already done. He finished 23rd, seven laps down.

The 2017 season has been a rough one on Friesen and his team, Halmar Friesen Racing.

After four DNFs in seven races and a single lead-lap finish (19th at Atlanta Motor Speedway), the new team (it debuted last season at Eldora) opted to sit out for two weeks to evaluate its program and take the time to prepare for the remainder of the full-time effort announced before the season began.

Come Kentucky Speedway, it looked like the time off had worked out for the organization as it bounced back to a 12th-place finish, an impressive effort for a team that looked like it could be forced to cut the season short with the rate the equipment was being destroyed.

Fast forward to this week, and Friesen, who crashed out of his Truck Series debut at Eldora last season but ran near the front at times, came in prepared to make the most of the lone dirt race on the schedule. He posted the quickest lap in qualifying and promptly followed it up with a win in his heat race.

If that wasn’t enough, he led the first 33 laps of the race before relinquishing the top spot. At the beginning of the second stage, he held the top spot for a single lap before Nemechek led 11 circuits. Friesen resumed the lead for the final 39 laps en route to a stage two win.

A pit stop under that caution to change tire that was losing air dropped the driver of the No. 52 to seventh, though he wasted little time moving to the lead once again. He led 20 more circuits for a race-high 93 before succumbing to a hard-charging Crafton as the track changed in the closing laps.

“Second sucks, bottom line,” Friesen lamented. “Having this opportunity has been a dream come true. It feels good to run good, but not closing out the deal burns.”

Later, Friesen explained in his post-race media availability: “The first seven races was probably the most frustrating racing I’ve ever been a part of in my life and a big learning experience. To run good and be up in the top five is good; we just wanted to close it out. There’s a little bit of a silver lining but not much.”

Finishing second in a race where the truck was as strong as it was may burn, but once Friesen gets a moment to take a step back and look at the overall big picture of getting so much television coverage, he’ll likely realize just how important this run was, despite bringing home a runner-up finish.

Rookie of the Race: Friesen

Points Update: Despite a disappointing 23rd-place finish, Sauter remains the championship leader by a slim seven-point margin over Bell. Briscoe is third, followed by racewinner Crafton. Rookie Enfinger rounds out the top five.

Nemechek sits just two markers outside the top five in sixth, followed by Rhodes. One point behind Rhodes, Ryan Truex sits eighth. Gragson and Cindric round out the top 10.

Up Next: The Camping World Truck Series heads to Pocono Raceway next Saturday, July 29. Coverage for the Overton’s 150 begins at 1 p.m. ET on FOX; the race can also be heard on your local MRN affiliate or SiruisXM NASCAR Channel 90.