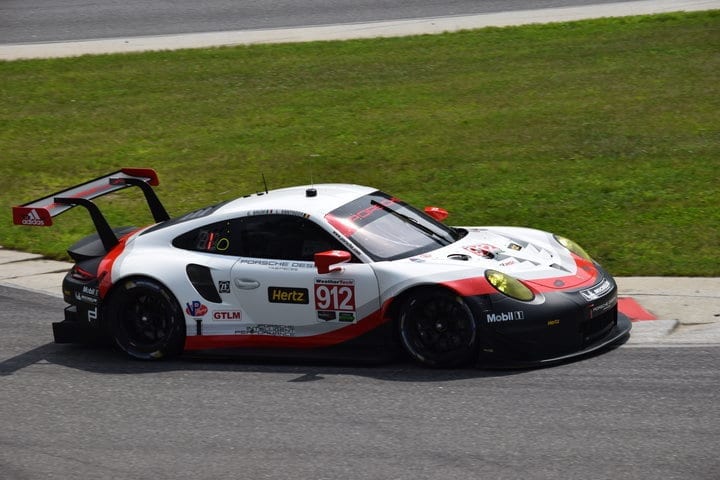 Afterwards, Bruni noted the general lack of experience that both he and teammate Laurens Vanthoor have at Lime Rock.

“Obviously since this morning we have to go through some program since seven years [have passed since I’ve] been here,” Bruni said in the Media Center.  “With a new car and new team, and my teammate (Vanthoor) was new here so we [went] slowly into the program learning the track and not making big changes in the car, just get the best out of it knowledge from the circuit.”

Lime Rock marks only the third race weekend for Bruni in the No. 912 Porsche.  He’s still learning the car as he goes.

“For me, I [just started] in June driving the car in North America, so from now on I expect an easy approach every time I step in the car,” Bruni continued.  “Because every time I step in the car the first ten laps I am still in the mind of the other car (Ferrari), even the switches and how the teams works is completely different. Its nice the changing and the new challenge, a new experience is always nice and very challenging. Obviously you have to work hard, and this is why I choose the new challenge.”

The session was a back-and-forth affair between both Porsches, the No. 67 Ford and the No. 3 Corvette.  Bruni ended up on top by about one-seventh of a second over Ford Chip Ganassi Racing’s Richard Westbrook.  Dirk Werner will start third in the No. 911 Porsche, followed by BMW Team RLL’s John Edwards.  Corvette Racing’s Tommy Milner will start fifth.  The entire GTLM class was separated by just over a half a second over the 1.474-mile course.

In GT Daytona, things were very close as well.  The top 15 cars in class were within one second of pole.

Snow was quite satisfied with his run.

“We topped Practice No. 2, but we didn’t know how well everybody else was out there, or how hard they were pushing,” Snow said in his press conference.  “Even though we were good in Practice No. 2, we had no way of knowing how we would be for qualifying.

“I did everything that I could out there,” Snow said in his post-qualifying press conference.  “[We got a good lap] early in the session, trying to get a clear lap.  I was nervous that someone else was going to pull [off a pole lap] in the middle or late in the session.  That happens quite a bit, but I ended up being able to get another quick lap at the end of the session that kept me up on pole.”

The IMSA WeatherTech SportsCar Championship Northeast Grand Prix is scheduled to go green at 3:10 p.m. on Saturday.  The race will air live on FOX Sports 2.  Those of you with authentication via your internet service provider and/or programming provider can also watch on FOX Sports GO.