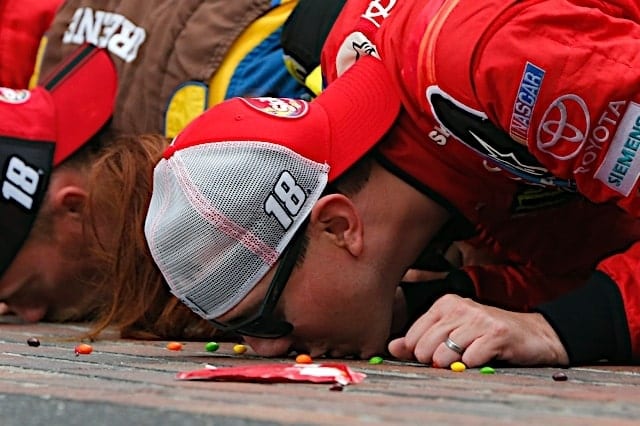 Strolling back into Indianapolis Motor Speedway with back-to-back Brickyard 400 wins, Kyle Busch always wonders how to be even better at the 2.5-mile track.

With two straight XFINITY Series wins as well, Busch’s next challenge at Indy could come in the Indianapolis 500, the famed Memorial Day weekend race that surpassed 100 runs in 2016.

“I would [do it], certainly,” Busch said Friday at Indy. “I thought I had a great opportunity to do it. I’m kind of glad it didn’t come together because [Fernando] Alonso stole the headlines last time it was done.”

Busch said he was all set to race the 500 last year until somebody put a halt on the progress last minute.

Despite the rejection, the 32-year-old is open-minded to give it another try, even if he isn’t the only one to do so.

“There may be more in the future — guys coming over to run that race,” he said. “I may have to split the limelight with someone else who wants to do it.”

It was only three years ago when Kyle’s brother Kurt Busch ran The Double, running the Monster Energy NASCAR Cup Series Coca-Cola 600 in Charlotte, North Carolina, and his first Indy 500. Finishing sixth, Kurt’s performance was followed by Formula 1 World Champion Fernando Alonso’s strong run this year where he led 27 laps before his engine expired.

However, Kyle Busch is aware of the difficulties of running such an event. Kurt had a brutal crash in practice the year he attempted the race and Kyle’s fear (or at least his boss’ fear) comes in the form of how to react when things go haywire at more than 230 mph.

“The biggest thing that scares my boss is that I’ve never driven those cars,” he said. “A Cup car, I know what to feel and when something bad starts to happen and I can try to fix it. That’s the biggest fear, just not knowing what those cars do when you’re in a bad situation.”

In the meantime, Busch will attempt to become the first driver to win three consecutive major motor races at Indianapolis since Michael Schumacher in Formula 1 from 2003 to ’06.

“I didn’t necessarily know that Michael Schumacher had won three in a row here,” he said. “Being in the NASCAR ranks, I knew that Jeff Gordon is the winningest driver here to win five Brickyard 400s. I keep that in my mind. I would certainly like to think that our team is good enough to score another win here to make it three in a row here and do something that has been unprecedented in NASCAR.”

Are we sure the deal wasn’t really for the Indy Lights race the day before?

Maybe Sam had some input to the decision?

Didn’t want to spend that much time looking after two babies.