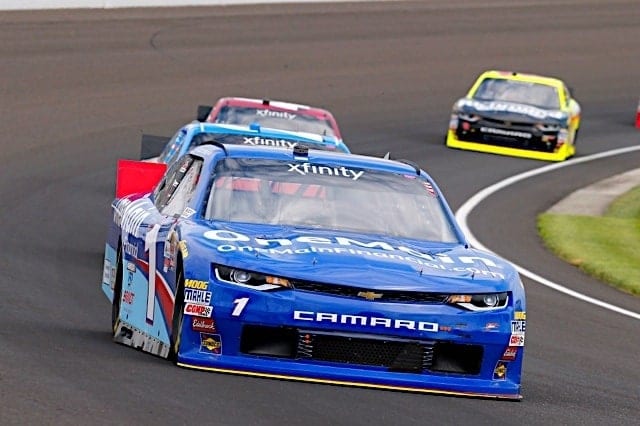 If you ask Elliott Sadler, the biggest change in the new aero package for the XFINITY Series this weekend at Indianapolis Motor Speedway is the aero ducts, not the restrictor plates as expected.

The ducts, which are located on each side of the front nose of the car, have bogged down the leading cars, giving an opportunity for a pass by the trailing machine. They have been placed adjacent to the front nose and radiator to pull air to the brake ducts, creating further drag on the racetrack.

Sadler led the opening practice session of the day and gave credit to the affect of the aero ducts in the opening two sessions.

“They do a really good job. I feel they bring the competition a little closer together,” Sadler said. “I still think it’s going to be a lot of the same Indy where track position, clean air are going to make a difference. But I don’t think you’ll see the top three cars get away. They are really keeping everyone together.”

Turning speeds more than 25 mph slower than 2016, each practice was dominated by packs of five to 10 cars drafting and passing down the track’s long straightaways. This is where the teams saw the true impact of the aero ducts.

“I raced in New Hampshire with the plates,” Sadler said of the Cup race from 2000. “The aero ducts are doing most of the work.”

Blake Koch took part in the restrictor plate test at Indy last fall, but says the use of the aero ducts have been far more effective.

“Like Elliott (Sadler) said, its going to be better than it was,” Koch said. “We tested the plates without the aero ducts and then we put them on. It was a big difference, a big gain.”

“A lot of us get into the rhythm of how important aero is,” Allgaier said. “The aero duct doesn’t completely negate all aero, but it does allow the fronts to be open. So, everyone had a giant hole in the nose. All of us have the exact same noses this week — they all have a giant hole in them.”

With an expected level of closer competition, this can and will highlight the importance of blocking and restarts during the 250-mile event. Sadler said it is blocking that will “get someone in trouble.”

“I think you will see a lot of blocking tomorrow,” Sadler said. “I told one of the guys… it’s Indy in the corners, Talladega on the straightaways. If they get a run on you, and they will if they have help, I think you will have to block. We’re not going to pack race, but we are definitely going to be closer together than we have ever been.”

Drafting, blocking and a craving for track position? Yes, restarts may be the moments of the race, Sadler said.

“Restarts tomorrow will be where you have to make your hay at,” he said. “It’ll be like Talladega, Daytona restarts where you’ll physically have to be pushing the car in front of you through the restart zone. Because of the plates, everyone will be bogged down a bit. It’s a recipe for some exciting racing.

“I think it will remind us of the Pocono Truck race. You have such a long straight where you can make something happen. Our cars will be in the same situation.”

After the only two practices of the weekend, optimism is in the air for what will be the sixth race for the series at Indianapolis.

“All in all, I’m optimistic tomorrow will be better than what we’ve seen the last couple years,” Sadler said.

Listen in as @SteveLetarte and the @NASCARonNBC crew break down the #XFINITYseries cars at @IMS! pic.twitter.com/pdxOJOVdxr