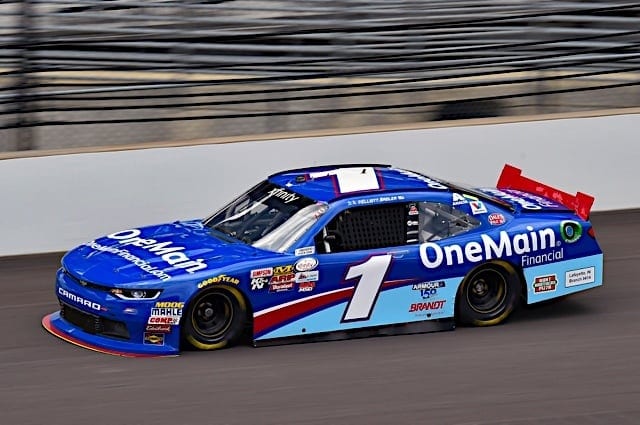 A race win may have been taken away in 2012 at Indianapolis Motor Speedway, but Elliott Sadler is in perfect position to get it back in 2017.

Turning a lap of 54.452 seconds (165.283 mph), Sadler bested Erik Jones to win the pole for Saturday’s Lilly Diabetes 250 from Indianapolis. The result is the 17th pole of his XFINITY Series career and first since 2014.

“It’s always great to get a pole at Indy,” Sadler said. “I wish I could say it’s me but this team has some fast cars. That’s true speed with this new package. It’s still going to be important to stay up front. The fans are in for a treat.”

Jones, who led the way in the first round, came up only 0.004 seconds short of Sadler’s time. William Byron, Justin Allgaier and Michael Annett completed the top five, giving JR Motorsports four of the top five starting spots.

Cole Custer starts sixth with Matt Tifft, Ryan Sieg, Ben Kennedy and Ryan Reed the top 10. The 8th-place result for Sieg is his best of 2017.

Four cars in the top five of #XFINITYSeries @IMS qualifying for @JRMotorsports.