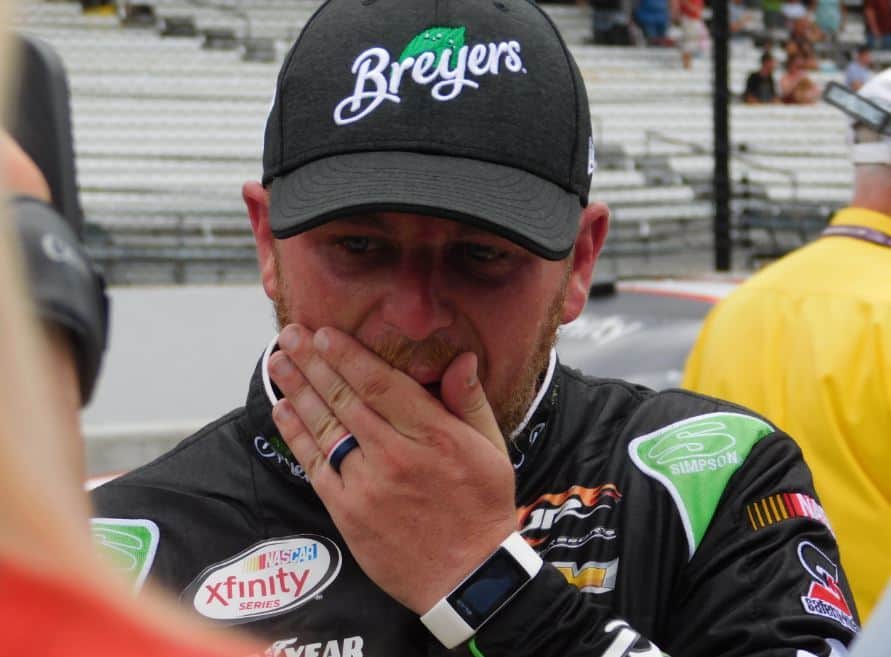 A day of potential turned into a nightmare for Justin Allgaier.

In Saturday’s Lilly Diabetes 250 at Indianapolis Motor Speedway, a strategy move took Allgaier’s No. 7 JR Motorsports team from the top to the bottom in a matter of seconds, as they chose to pit from the race lead near the end of Stage 2.

Just taking the top spot on the outside lane, Allgaier pitted with three laps to go in the second stage and made a driver error when he overshot the pit box. The mistakes compounded when he ran over an air hose while the right-front tire was not secured.

What followed what a forced stoppage by Allgaier on track, putting the race under caution. For Allgaier, it was an attempt to keep the wheel from coming off.

“I was going to drive around,” Allgaier said. “The rule is that the tire can’t come off. We wanted to make sure it didn’t come off. I think we probably could’ve made it, but if I do keep driving and the tire comes off, then what?”

In a risk-reward scenario, Allgaier dodged a situation that may have suspended crew chief Jason Burdett for four races, per NASCAR rulebook.

“It was still on the hub,” he said. “It was so wobbly that it got caught up in the fender. We kind of dodged a bullet that the fender held it where it did. That was a plus.”

A disastrous pit stop proves costly for @J_Allgaier; race over for the No. 7. #LillyDiabetes250 pic.twitter.com/0lDfUULDSz

Exiting the car, Allgaier returned to the track, eventually finishing 35th, 14 laps down.

“Circumstances, I screwed myself there going over the line,” he said. “These boxes are super narrow and I had no idea Id be in that spot. I tried to fix the first mistake and made a second one that costed us a good day.”

Leading the race for four laps before the strategy move, Allgaier said he was a sitting duck at that point in the race.

“Had we not stopped, the whole field would’ve pitted before that point,” he said. “Unfortunately, everyone saw we were having issues. For us, the big deal was that we didn’t lose track position when the stage ended. It would’ve been the right call if roles been different.”

Though disappointment was palpable in the No. 7 pit post-race, Allgaier tipped his hat to NASCAR after what he thought was a respectable leap forward in brining closer competition to Indianapolis.

“It’s definitely better than what we’ve had here in the past for sure,” he said. “Do I think it can be tweaked on? yeah, probably. We were able to drive through the field when we needed to. I definitely think it’s good, there are some changes to be made, but I give NASCAR credit. it worked out.”

When the Lil Gator came in the first time and plowed over his jack man I stated that was just a mistake coming in hot and a little wide.

The second time he came in and was outside the box was totally unacceptable for someone that wasn’t a rookie. Furthermore; I’m not sure if the jack dropped or if he was told to go but once again that was totally unacceptable for someone with that many years in the sport. This possibly could have been a driver/crew error but this would have never happened if he put the car in the box with nobody around him.

I am guessing he will be doing many pit stop practices this week.

The jack dropped so that he could reposition the car. Unfortunately, the tire changer had already removed the lug nuts. Plenty of blame to go around on this one. Granted, he stopped in the wrong place, but the crew should not have started working on the car while it was out of the box. The jackman should not have raised the car with it out of the box. Even then, if they had waited to remove the lug nuts until the car was in position, and had handled the air gun properly, his taking off would not have been the problem it was. This was truely a team effort at screwing the pooch.

Man he was a calamity on pit road yesterday.

I remember one year where Dale Jr. had a tough time finding his pit box.