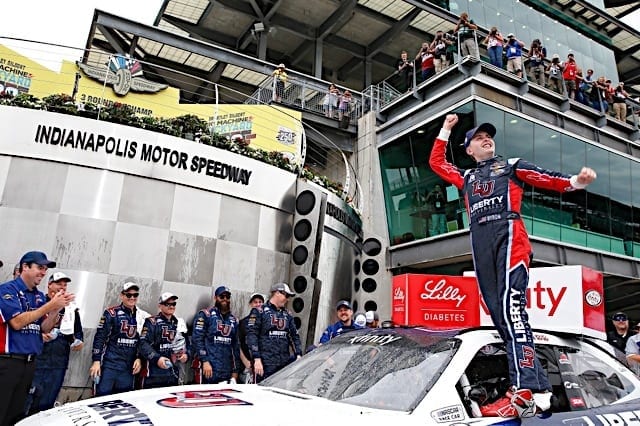 Like expected, the new aero package for the XFINITY Series at Indianapolis Motor Speedway gave us a down-to-the-wire finish in Saturday’s Lilly Diabetes 250.

William Byron, who grabbed the lead through pit cycle, held onto the top spot to win for the third time in 2017.

“A was a little worried about [old tires],” Byron said. “The pace slowed up a bit. I was just thinking about the tires until about five to go, then I reset my mind and said, ‘You know what… if it blows, it blows. We had nothing to lose. But I thought it was awesome, great place to pass. To make laps around here is very special.”

Paul Menard gave it a gallant effort, catching and passing second-place Joey Logano to make a charge at Byron. Though he faked low a few times, Menard came home second, 0.108 seconds behind the No. 9.

In its entirety, the 100-lap race had record-breaking competition and almost constant battles for the race lead. In total, there were 16 lead changes on the day (more than the last two XFINITY Indy races combined) and eight different leaders.

One of them was Kyle Busch, the two-time defending race winner who lost the lead through pit strategy and never rebounded. Despite leading a race-high 44 laps, Busch wound up 12th.

Another driver who drew the short stick was Justin Allgaier, the JR Motorsports driver who chose to pit with two laps to go in Stage 2 while leading. The strategy move bit Allgaier, as he ran over a pit hose and also suffered a loose wheel on his No. 7, which forced him to park on the side of the racetrack. He returned to the track to finish 35th.

Erik Jones additionally found misfortunate, being penalized for a loose tire during the race’s final pit stop. He finished 23rd after qualifying second on the day.

Not to to take away from William Byron’s brilliant win, but this really shows how much desire Paul Menard has. He had a faster car, already won on this track but couldn’t get around a first timer at this hallowed ground.