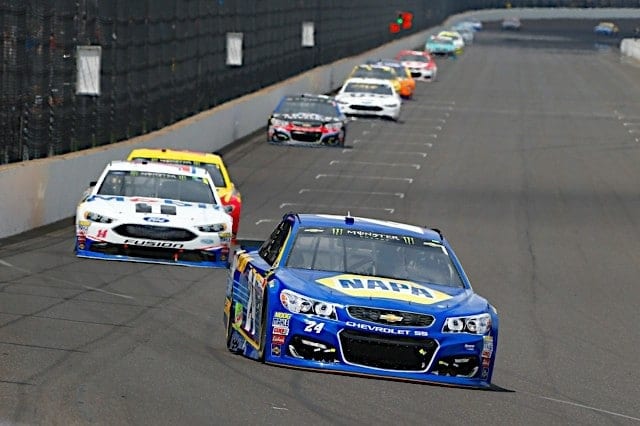 Sunday was a short day for Chase Elliott in the Brickyard 400. Hoping to follow in replacement Jeff Gordon’s footsteps, winning the marquee race for the first time in his second season he instead earned an uglier first: first Cup Series engine failure.

Following a mid-pack qualifying effort of 16th for Sunday’s race at Indianapolis Motor Speedway, the No. 24 lost a cylinder shortly following a Lap 18 restart.

“Some type of motor issue, started to blow smoke out the pipes,” Elliott said. “I don’t know what it is, we’ll have to wait and see.”

Attempting to wait out the run before the competition caution, Elliott fell to 34th.

With a lengthy pit stop under the Lap 30 competition caution, Elliott returned the the track before blowing the motor entirely on Lap 45, five laps prior to the end of Stage 1.

Scored in the 39th finishing position in his second Brickyard 400 start, despite the first-time incident in his Hendrick Motorsports career, Elliott’s woes will have a small impact in the playoff points. He came into this race 150 points above the cutoff line, a solid cushion against Lady Luck.

“I’ve been racing Hendrick engines since 2013 and this is the first engine problem I’ve ever had,” he said. “I’ll take those odds all day long.”

.@ChaseElliott's day is done. His engine blew just before the end of Stage 1. #NASCARonNBC #Brickyard400 pic.twitter.com/KaEmbc0aj1