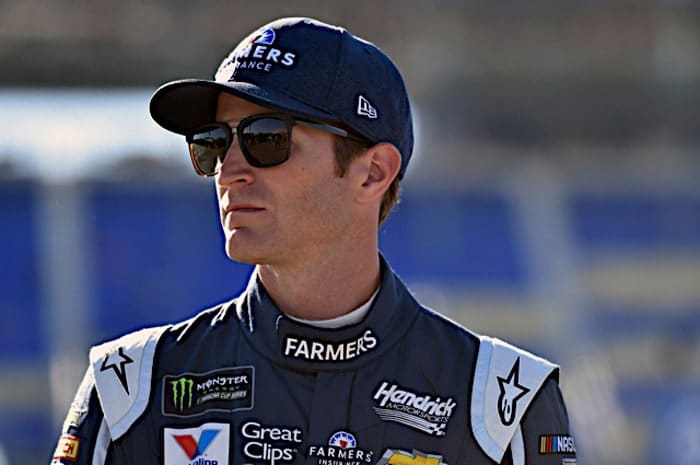 The Monster Energy NASCAR Cup Series is back at Indianapolis Motor Speedway Sunday afternoon for the Brickyard 400. You’ll need your daily fantasy NASCAR lineup set by the green flag shortly after 2:30 p.m. ET.

Track position plays a big part in your Indianapolis DraftKings strategy. One would think the 2.5-mile track would play like any other superspeedway, but that is not the case. It’s extremely difficult to pass once the field spreads out. As a result, most positions are gained on restarts and not as the race wears on.

It will be important to find drivers who ran fast in practice and wound up towards the top of the list in 10 consecutive lap run speed. Many cars will fade on long runs, so take advantage of the ones that get better as the laps tag on.

This week’s fantasy forecast is backed by DraftKings, the No. 1 platform for daily fantasy sports. You can jump in on all of the daily fantasy NASCAR action at Indianapolis this weekend by signing up here for a free entry into one of this weekend’s contests. All you have to do is make a $5 deposit to get started!

Busch has been the most dominant driver at Indianapolis the past five years. He has won the past two races here and has finished within the top 10 in all five. In 2016, Busch led 149 of 170 laps. He has an average finish of 9.0 at Indy through 12 career starts.

Busch was 13th fastest in final practice, which is not ideal when looking for a dominator. The thing is, Indianapolis has historically had some pretty long green-flag runs. Busch was the second-fastest long run car in practice of the 12 that posted 10 or more consecutive laps.

Busch was also one of the only drivers who ran the throttle wide open during qualifying. That move netted him the pole by 0.250 seconds. In fact, he was a full mile per hour faster than second place Kevin Harvick in the third round.

The younger Busch has now shown sprint speed and long run speed. He will be the fastest car on the track, running in clean air to start the race. That puts the No. 18 Toyota in great position to dominate this race once again.

Kahne plays right into our DraftKings hand. He qualified right in the middle of the pack (19th) but has a much better car than his starting position would let on. Kahne was fourth fastest in the first Cup practice Saturday but was the best of two cars that recorded long runs.

He dropped down to ninth fastest in final practice but still ran ahead of this year’s top talent: Martin Truex Jr. and Kyle Larson. Of the 12 cars that ran at least 10 consecutive laps, he was sixth overall.

Kahne is 10th among all active drivers in average finish at Indianapolis. He’s earned three top fives and six top 10s in 13 career starts at the track. He has finished inside the top 20 in 10 of those 13 races, showcasing the consistency a fantasy player looks for.

Kahne has a modest price of $7,900, so the value he presents this week is pretty high. He has top-10 speed and will finish there with a clean run. 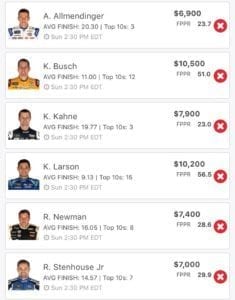