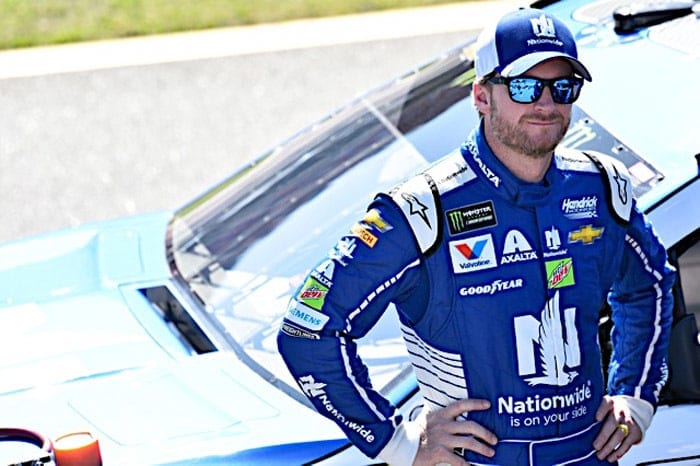 That was not the type of smoke show Dale Earnhardt Jr. wanted to perform in his final Brickyard 400 start. His Monster Energy NASCAR Cup Series career at Indianapolis Motor Speedway ended with his No. 88 Chevrolet sitting inside the garage.

Following a stack-up on a Lap 75 restart, Earnhardt hit the rear of Trevor Bayne’s No. 6, causing severe damage to the front of his Chevrolet.

Instantly, a massive cloud of smoke pumped out the rear of the Hendrick Motorsports Chevy; the radiator was destroyed. That wreck ended Earnhardt’s day on Lap 76, his sixth DNF in 20 starts this year.

“It won’t stick around too long,” he said of the string of bad luck in his farewell season. “We had a great car, I thought a top-10 car. We could’ve finished there, I thought.”

He’d already spent the day working hard. Qualifying 13th, Earnhardt dropped heavily through the field in stage 1, falling to 28th before the first caution of the day on Lap 9. He fought back, racing into the top 10 by the end of that stage before disaster struck. Earnhardt, still considered racing in mid-pack was in heavy traffic before the incident developed off turn 2.

“We were on the outside on that restart and trying to be aggressive, you have to be because everybody is,” he said. “A lot of them checked up on the outside, we were all in the back of each other and it just knocked the radiator out of my car. We hit the No. 6 car pretty good. It happened so fast, I couldn’t react.”

Entering Indianapolis 21st in driver points, another DNF will further confirm Earnhardt’s stance as a must-win driver to make the playoffs in his final MENCS season.

"The car was fast. Top 10 car for sure. Hopefully our luck will turn around, this has been tough for sure" @DaleJr talks with @NASCARonNBC

Ride along with @DaleJr for that contact at @IMS.#Brickyard400 pic.twitter.com/HpJT1tmIVi