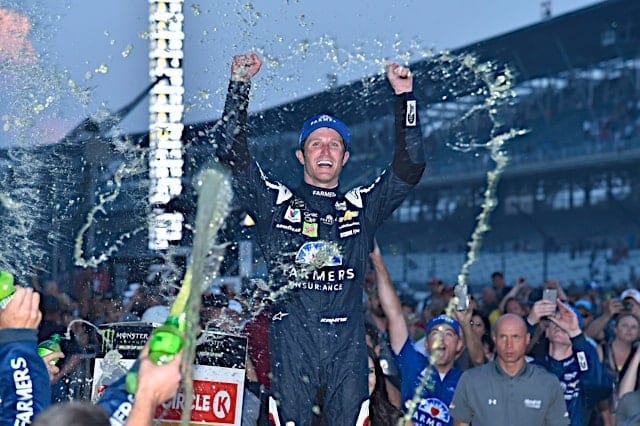 On the final restart of Sunday’s beyond-chaotic Brickyard 400 from Indianapolis Motor Speedway, Kasey Kahne stole the race lead from Brad Keselowski. And when Denny Hamlin crashed down the backstretch, the caution came out past the overtime line, ending the race under yellow.

Kahne scored his first Monster Energy NASCAR Cup Series win since 2014, snapping a 102-race winless drought toward the 18th win of his career.

“It’s been a while since I’ve won so you have to wonder,” Kahne said. “A win like today can give myself confidence, momentum and our whole team a boost, which is something we need. I feel like this is a huge win for us. It being the Brickyard means even more to me. It feels really, really good.”

Keselowski gambled on pit strategy in the closing 30 laps of the double-overtime event, leading the race for 23 laps. Bringing the field down for the final restart, he was outdueled by Kahne in Turn 1, finishing second.

It was a vicious crash by Clint Bowyer that put Keselowski in the catbird seat, as he stretched the fuel to keep the top spot. Though it was a positive moment for Keselowski, the Speedway fell silent after Bowyer’s huge hit, which was compounded by another impact from teammate Kurt Busch, Jamie McMurray and Erik Jones.

Unfortunately, the wreck with 10 laps to go was far from the only one. David Ragan had the first major impact of the afternoon, smashing the inside Turn 1 wall on Lap 56. Dale Earnhardt Jr.’s last Brickyard 400 race ended early when he broke a radiator after hitting Trevor Bayne.

Ricky Stenhouse Jr. crashed solo on the backstretch on Lap 106, when he hit head-on into the inside wall.

The moment of the race arguably happened on Lap 110 when leader Martin Truex Jr. crashed race-dominator Kyle Busch on a restart. Busch led 87 laps and was going for a three straight Brickyard victory.

On the day, three red flags waved; the first for heavy rain, the second for Bowyer’s accident and the third for a major pileup on a late restart, which took our Trevor Bayne, Michael McDowell and others.

Due to the attrition, the top 15 was more topsy-turvy as usual. Ryan Newman, Joey Logano and Matt Kenseth completed the top five while Kevin Harvick and Daniel Suarez in sixth and seventh. Matt DiBenedetto grabbed his third career top-10 finish in eighth while Chris Buescher and AJ Allmendinger rounded out the top 10, making for a double top-10 effort by JTG Daugherty Racing.

DiBenedetto scored his second top 10 of the season and first on a non-plate track with Go Fas Racing.

“Stand on the gas and hope for the best… that’s pretty much what I did today,” he said. “You hope it’s your day and it was our day, man. That was pretty intense.”

For Logano, a fourth-place effort stops the bleeding after a 37th-place finish last week at New Hampshire.

“I felt the two cars better than us wrecked [laughs],” Logano said. “We just didn’t capitalize. Positive side, we are mad about fourth again.”

That's one kiss that this @FarmersRacing team won't forget. pic.twitter.com/z9gNCk3dnc

What a wild race! Congrats to @kaseykahne. #RaceHub on Tues will be busy, could do 10 episodes on @FS1 this week there's so much to dissect

And it wasn’t a Toyota!

Funny how NASCAR waited until the 5 was past the overtime line before throwing the Caution. Kinda like Byron’s win a few weeks back.

You noticed that too!!!!

There’s no conspiracy here. At that point, the race would have been called due to darkness (no matter who was in the lead) even if they hadn’t reached the overtime line.

Agreed. I’m far from a Hendrick fan, but the race was over no matter when they threw the caution. There was no time to clean up and have enough light to finish it. Nascar made the right call to let them race to the overtime line.

Who wants to bet that if Brad wasn’t leading for the last restart the product would have been called because of darkness?

Who else wants to bet that if Brad had been leading before the call-it-off line that the caution would have been thrown?

I wonder if Kyle clapped his hands when Kurt bent his car?

Brian at the bar must have been out of his mind after the wrecks on the double-file restarts… if he could still see straight and it was on the TV.

Raise your hand if you thought the next winner for Mr. H would be Kasey! You in the back! You’re lying.

I wonder if Mr. H will keep Kasey around longer now?

Since Kes jumped the restart in order to get the lead, your Ford guy was fortunate enough not to get penalized. You sure would have been complaining about the favoritism against Ford then wouldn’t you?

Larson is running Sprints at Ohsweken Monday and Outlaws Tuesday with Rico Abreu. Near Hamilton.

Man, did you see the record setting crowds overflowing the stands?