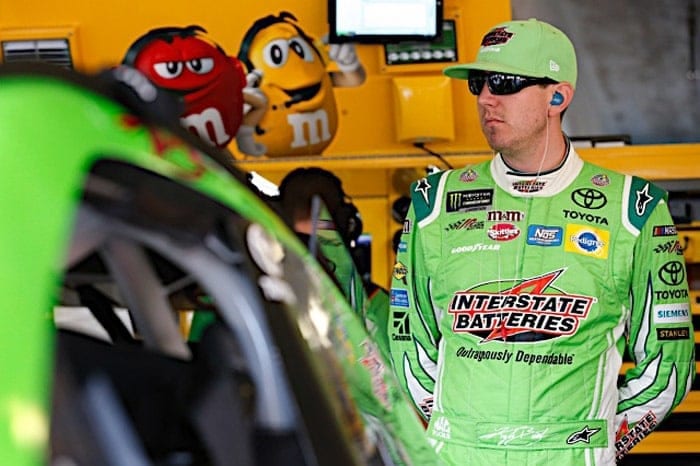 Two stage wins, a Brickyard 400 pole, and a dominant performance. None of those things protected Kyle Busch from disaster in Turn 1 at Indianapolis Motor Speedway.

Following a restart with 50 laps to go, leader Martin Truex Jr. got loose from the inside lane, overcorrecting and turning the No. 18 of Busch. Just like that, the top two cars were wrecking out of the race.

What followed were two vicious hits. Busch backed into the SAFER barrier while Truex burst into spectacular flames along the Turn 2 wall. Both drivers were unhurt but their chances to win the race were destroyed.

Busch, who led a race-high 87 laps, said the crash was just “another way of figuring out how to lose these things.”

“I guess he got loose on the inside of us and caused a crash,” Busch said of Truex. “On that restart, I made the call to throw away the games and race straight up.”

The drivers’ aggressive, side-by-side battle clearly raised the risks. But despite the accident, Busch saw it as the best opportunity to race to the end with Truex, who was the only one able to stay in touch with him all afternoon.

“It’s time to race,” Busch said. “If I let him go and he gets a two-three-second gap on me before green-flag pit stops, I have no opportunity. I felt we were good enough to keep a gap but it didn’t work.

“Do I regret it? No. You race for the win, you’re supposed to race hard. If I would’ve done the same thing as the previous restart and he gets a three-second gap, he wins the race. I’ll be thinking about it then.”

Truex, for his part took blame for losing the handle on his No. 78 Toyota.

“Just got loose and wrecked him,” he said. “Totally my fault.”

Truex, whose car burst into heavy flames said he had to intentionally slam the car into the outside wall twice in order to try and put the fire out. He remains winless in 13 career Indy starts.

Following 20 races in 2017, Busch is still winless, too despite leading a whopping 1,040 laps. As his bid for three straight Brickyard 400s came to an end his Cup Series victory drought rose to 36 races, the longest of his Cup career.

It's over for @KyleBusch and @MartinTruex_Jr at @IMS! They crash on the restart late in the #Brickyard400! #NASCARonNBC

I was heartbroken when it happened that Kenseth missed it. I could hear Kenseth on the radio “Logano caused it!”

Lol. Right..and not a angry word between these two putzes!!!!!!!!!!!! If it was a Penske driver all hell would have broken loose. These people are disgusting hypocrites at the very least they are guilty of inciting stupidity with the lower IQ”s who go on their PENSKE witch hunts at a tweet about BRAD AND JOEY that the idiots like COLE PEARS. MARTY TRUEX, KYLE, MATTY and all the Gibbs Girls give out lightening quick when it involves a FORD/PENSKE DRIVER! They play the banjo’s to the Deliverance folks like pros!