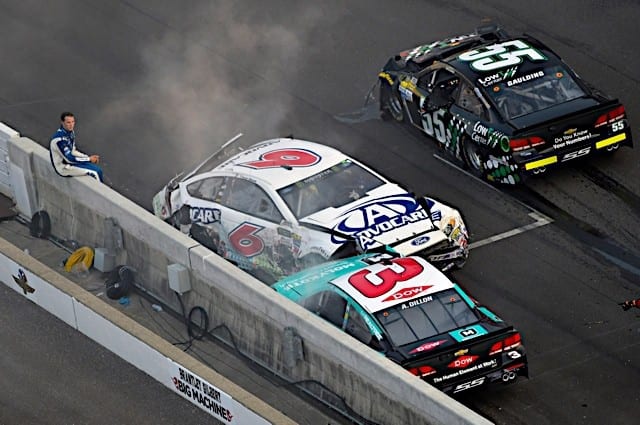 Trevor Bayne tried the fuel mileage game and put himself in position to possibly win his second major race had a caution not came out in the final 40 laps. The 2011 Daytona 500 champion pitted with 42 laps to go, when most of the field did not and had enough fuel to make it. Had the race finished under green flag conditions, he would have stayed out while the leaders pitted and could have potentially cruised to victory.

Despite the late race caution foiling his strategy, Bayne found himself in third-place on the penultimate restart and still could have given the leaders a run for their money had he not been collected in the accordion effect. Bayne let everyone in Indianapolis know he was there despite being relegated to a 20th-place finish following the wreck, .

NASCAR might just be making the right call in having Indianapolis Motor Speedway as the cutoff race for the playoffs next year. IMS has taken a lot of heat in recent years for putting on less than thrilling stock car races, but the package that the Monster Energy NASCAR Cup Series showed up with this time provided much better racing than previous Brickyard 400s.

The race actually featured passing, in addition to ultra-aggressive blocking and creative strategies. If the 2018 Brickyard 400 is similar to this year’s, then it will provide plenty of opportunities for drivers outside of the playoffs to throw up a Hail Mary and go for a win, like Kasey Kahne did this time.

Where…did the pole-sitter and defending race winner end up?

Kyle Busch had the car to make history and win his third straight Brickyard 400. He sat on the pole and dominated the race’s first two stages. At one point, pit strategy forced him to restart back in the pack, and Busch flew by the entire field to retake the lead in no time.

Busch lost the lead when Martin Truex Jr.’s pit crew put the No. 78 car ahead of the No. 18 car. The dominant Toyota duo had made gentlemen’s agreements on previous restarts throughout the event where Busch would restart on the outside and Truex would let him in. On the lap 110 restart, with Truex being the control car, the agreement went by the wayside. Truex took the bottom and Busch raced him into the corner. The No. 78 car got loose underneath of Busch and wiped out both cars in a violent, fiery wreck.

What could have been record-setting day for Busch turned into 34th-place finish; a perfect summary of his season so far.

Why… did Kasey Kahne win?

Kahne’s name was hardly mentioned through the first three quarters of the race, running outside of the top 15. When most of the leaders made green flag pit stops with just over 20 laps to go, Brad Keselowski, Jimmie Johnson and Kahne elected to stay on the racetrack despite not being able to make it the rest of the way on fuel. The three drivers were banking on a caution to come out before they stopped so that they would have the track position when everyone else came back down pit road.

Crew chief Keith Rodden finally called the No. 5 to the pits on lap 148, and Kahne was coming off pit road when Clint Bowyer, Erik Jones, Jamie McMurray and Kurt Busch wrecked to bring out the caution. Kahne used the first bit of luck he has seen all season to stay out and take the lead when everyone else pitted under the caution. He worked hard to hold off Keselowski and Johnson during the final few restarts, somehow surviving a three-wide battle with the two and having the restart of his life in overtime to cruise past leader Keselowski.

It was Kahne’s first Brickyard 400 win, his 18th overall win of his career and it snapped a career long 102-race winless streak.

How…did this race effect the playoffs?

Kahne was way outside of the top 16 in points and his only realistic way to qualify for the post-season was to win a race. He delivered, and the result is that Bowyer is no longer safely in on points as there have now been 12 different winners (excluding Joey Logano‘s encumbered win at Richmond Raceway) and only four drivers can qualify for the playoffs on points.

As a result of Kahne’s victory, Bowyer and Logano essentially need to win to get in and veteran Matt Kenseth is left on a 33-point bubble. The 2003 Cup champion essentially needs to get a win to prevent any new winners from bumping him out.

Additionally, a little more pressure has been added on Jamie McMurray and Chase Elliott to go without incident over the next six races. They have buffers of 66 and 55 points respectively, but a couple bad races can knock them right out of contention.

Why… was there so much carnage?

This year’s Brickyard 400 set a track record for cautions with 14, five of them coming in the final 15 laps. Due to the high speeds and the narrowness of the track, many of the incidents collected other cars and the in-car fire extinguishers were tested several times.

In the past, Cup racing at IMS has been fairly tame, but I think the aggression was amped up this time because, after years of trying, winning has finally become everything. With the new points system, guys like Johnson and Keselowski need to try to win every chance they get instead of winning once and riding along until the playoffs start, or points race.

With two laps to go, Kahne and Keselowski made contact coming out of Turn 2, allowing Johnson to get underneath of them. The three drivers drove down the backstretch three-abreast and each sailed into Turn 3 as hard as their cars would allow. None of them would give an inch with the race on the line, and it resulted with Johnson in the wall and a totaled No. 48 car.

Winning is everything now and the result to that will always be races that end in total carnage, whether you love it or hate it.

Why not have “competition cautions” in each stage? Brian has to be thinking it.

Yeah there have been way too many competition cautions this year. It’s like their way of adding a fourth stage just because they can and we all know the real reason for the stages…. to provide more commercial opportunities for the networks and to keep more drivers on the lead lap so their fans don’t tune out.

Phil H
Reply to  Bill B

Two cars outran the entire field. If they hadn’t wrecked each other, it would have been another runaway. I’m not sure that half the field wrecking makes a ‘good race’.

Brian would have loved it if he knew it was happening.

Man, did you see the record setting crowds overflowing the stands?

Did you notice the NBC crawl of current driver positions was more an advertisement for various companies than any useful information about the current positions of drivers. Typically, it got as far as position 24, then was completely covered by some sponsor’s logo like Capital 1, then it returned to position 1. Furthermore, no timing intervals were provided. If they are going to put ad revenues above useful information about the competition, why watch? Also, the racing itself was pretty poor. It was like the gang who couldn’t shoot straight. You know dollars to donuts that the powers that be waited for Kahne to cross the overtime line before throwing the final yellow, even though a potentially serious accident had been unfolding for a few seconds behind. They clearly just wanted to get the damn thing over with. In that regard, at least, I agreed with them.

I have a different theory as to why all the wrecking. Because passing was at a premium and usually only on restarts, guys were blocking and getting everything they could before the field strung out. This led to over aggressiveness and resulted in these wrecks. I think wanting to win at Indy played into it too but I think its a pattern on most tracks with limited passing.

Kes jumped that restart that got him the lead before the last restart. He’s lucky he didn’t get a penalty.

Sorry folks but the race was over regardless of when they threw the last yellow. There was no way the track gets cleaned up in time for another restart before dark. Or maybe people would rather go back to races ending at their normal distance under yellow and all the manipulation that could take place then? You all complained about that too.