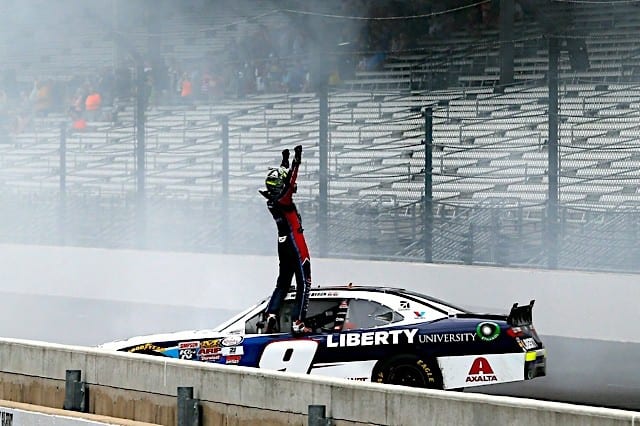 Before Friday, William Byron had never visited the hallowed grounds of Indianapolis Motor Speedway. But from the moment his car unloaded off the truck, the driver of the No. 9 JR Motorsports Chevy proved he would be a factor.

With the new aerodynamic package, as well as adding restrictor plates to an XFINITY Series event at the Brickyard, all of JRM’s cars were quick all weekend long, taking four of the top five positions in qualifying. However, it was quickly noted that Byron had the best one of the bunch, winning the first stage and putting himself in position to win at Indy.

With 18 laps to go, Byron was sitting third when the front two Toyotas of Kyle Busch and Erik Jones made a pit stop, thinking tire wear was going to be a problem during the final laps. Byron himself was also reporting a vibration over the course of the last 20 circuits, the handling of his car worsening with every minute.

Somehow, Byron stayed on top, bypassing the Toyotas with better strategy. He then held off a surprise challenger as Paul Menard edged around Joey Logano for second, closing in hard on Byron. The last lap produced a hair-raising finish that almost put the Richard Childress Racing veteran ahead of the pack.

But Byron held on. In the end, the No. 9 car was victorious by one-tenth of a second, earning the rookie his third XFINITY Series victory.

“It’s very humbling to be here at Indianapolis and win,” Byron said after doing his burnout on the frontstretch. “I can’t believe that tire hung on, but that’s awesome. This is so cool. It takes a lot to win these races, and to win here is special.”

Byron has now taken three of the last five XFINITY Series races, dating back to Iowa Speedway. Two of those wins have come at the sport’s most legendary venues, Daytona and Indianapolis.

Saturday was the best XFINITY Series race at Indianapolis. Period.

I, personally, was skeptical of NASCAR putting restrictor plates on the XFINITY Series at the Brickyard, only because it didn’t seem like it would work. (New Hampshire 2000, anyone?)

But after a test session following last year’s event, this move was absolutely the way to go, and it made for one helluva race.

There were 16 lead changes Saturday, almost doubling the previous high at the track (nine), which happened twice in the previous five races. Most of those switches were under green-flag conditions, due to the runs that the second-place car had going down the straightaways into the corners.

The restrictor plates and less horsepower also made the drivers go full throttle. That had veterans like pole sitter Elliott Sadler re-teaching themselves how to drive the track. Typically, it’s not good when cars are full throttle because it makes passing near impossible. But in this case, the action increased substantially, to the point I’d expect it in the Cup Series next season.

Restarts in particular were incredible: drivers criss-crossed, going three and even four-wide at times. Drivers were bold enough to dive in on the outside of another car, passing on the outside in the corner. It was truly a show.

When the report came out in March that NASCAR was going in this direction, they mentioned that if all went well, this adjustment could be used at other venues. Because of their success, I’m now in favor of officials trying it at other tracks.

What a win for NASCAR.

On lap 39, a few of the XFINITY Series regulars that are battling for playoff position got into an incident in Turn 3. Ryan Sieg got into the quarterpanel of Spencer Gallagher, turning the No. 23 car. However, the No. 39 didn’t go unscathed, as Blake Koch made contact, spinning Sieg.

Attempting to dodge the wreck, Tyler Reddick made an evasive move through the grass, tearing up the splitter as well as the right-side valance of the No. 42 car. The 21-year-old, running a partial schedule, came into the event finishing top 13 in four of the last five races; he left with a DNF.

As for Sieg, he rebounded to take the checkered flag in 14th. That’s the highest of all drivers involved in the incident. He even earned a stage point in the same stage of the crash, finishing ninth. However, the No. 39 team lost a handful of points to Brendan Gaughan in the long run, now sitting 15 points below the final playoff spot.

Koch rebounded to finish a respectable 17th. As for Gallagher? He blew a tire on the final lap, coming home 28th. It’s the 10th finish outside the top 20 in 18 races this season for the rookie.

After qualifying in fourth position, Justin Allgaier proved early on that he had one of the fastest cars in the field. The No. 7 Chevy quickly raced its way to the lead, darting around the outside of Busch on a restart. Allgaier then paced the field for four circuits.

Sadly for him, it was all downhill from there. The first incident of Allgaier’s day happened on a pit stop during the competition caution on lap 15. He stopped his No. 7 Chevrolet far away from the wall, then got shoved from behind, hitting his jackman while putting on the brakes. The crew member flipped into the air, though he still somehow recovered to execute the rest of the stop.

During the first caution, @J_Allgaier was involved in an incident on pit road, when he hit his jackman with his car. #NASCARonNBCSN pic.twitter.com/kAlgzFAfYt

Right after Allgaier fought back to get around Busch for the lead, seemingly recovered crew chief Jason Burdett called his driver to pit road with three laps remaining in the second stage. His goal was to set the No. 7 team up to be in prime position for the final 40-lap segment.

Instead, disaster struck. For the second time, Allgaier stopped outside of his pit stall, and because the crew had already begun service on the vehicle, he was facing a penalty. But, with a bit of confusion, the veteran took off from the stall without the right front tire being secure. The air hose stuck inside the wheel well, whipping it back at the pit crew and narrowly missing everyone.

"This is unacceptable from a race car driver at this level."

Another mistake for @J_Allgaier eliminates him from contention at @IMS. pic.twitter.com/e7ch6EjkfS

“I got run into from behind on the first stop, and took out some of my guys,” Allgaier said post-race. “That’s probably, as a driver, the last thing you want to happen. I would rather wreck a thousand times myself than hit any of these guys.

“I got the right front outside the box, and just calamity. It was all my fault, I took off. Luckily, the tire was still on. That’s the plus. That’s the last thing I would have wanted to happen was the tire to come off. Terrible day. Had a racecar that was up there and capable of leading laps.”

Had Allgaier not stopped on the track to bring out the caution and the tire fallen off, Burdett would have been suspended for four events. Adam Stevens, Kyle Busch’s Cup Series crew chief and Mike Hillman Jr., Chase Briscoe’s Camping World Truck Series head wrench incurred that penalty after tires fell off their cars at Dover last month.

Daniel Hemric may not be considered an underdog, sitting fifth in the championship standings, but the No. 21 team overcame a lot on Saturday.

In the opening 10 laps, Hemric made an unscheduled pit stop to resolve an overheating problem caused by a chunk of grass covering the grille of his Chevrolet. Water was boiling out of the machine, causing him to nearly lose a lap.

The competition caution on lap 15 saved Hemric. It then shot him to the lead when Danny Stockman Jr. chose to leave the No. 21 car out on track.

But on the ensuing restart, Hemric was stalled in third gear, losing more than 10 positions by Turn 1. He was in-and-out of three-wide racing from that point on, costing him valuable track position. At the end of Stage 1, the team had dropped to 19th.

Stage 2 turned out better with a bit of pit strategy in the final portion of the 30-lap segment. With many of the leaders pitting in the final three laps, Hemric earned eight stage points, finishing third.

Having to pit, the No. 21 car restarted 12th, but the solid-handling Chevy pushed forward in the final stage. Overcoming all the adversity that the team had faced, Hemric brought home his Richard Childress Racing machine in eighth. Teammates Brandon Jones and Ty Dillon wound up just behind him to round out the top 10.

For the first time this season, Menard was the highest-finishing Cup Series regular of the five events he has competed in the No. 2 machine. Of those races, he has three finishes outside the top 30.

Logano brought the No. 22 car home in third, while Dillon was the only other Cup Series regular in the top 10 (10th). Busch drove from 21st to 12th in the final 17 laps after pitting from the lead with 18 laps to go.

J.J. Yeley, making a rare Cup Series start this weekend, crossed the finish line in 15th. Having to serve a pit road penalty for an uncontrolled tire with 18 laps to go, Jones ended up 23rd. Joey Gase, competing for Premium Motorsports in the Brickyard 400, finished 30th in his full-time No. 52 ride.

“I wasn’t even close, a distant third.  I was kind of in the hunt there with the No. 9, but just didn’t have a fast enough car to hang with him.” – Joey Logano

“It was a lot different than what we tested.  I ran my own race, but I felt like we were passing a lot more.  It felt like you could suck up, get runs, play a lot more strategy rather than just ride around single-file once the race got settled out.” – Ryan Reed, finished sixth

“We probably should have really had a good day or been in Victory Lane had things played out the right way.” – Matt Tifft, finished 11th

Scoring yet another victory at one of racing’s most historic venues, Byron has jumped to the top of a lot of people’s minds as the favorite for the XFINITY Series championship. He beat the likes of Menard, Logano, Sadler, and even passed Busch for the lead early in the race. This 19-year-old teenager is proving that he wants to be a big part of the future of NASCAR.

The XFINITY Series heads to Iowa for the second time in just over a month next week, where Byron scored the victory in June. The green flag is scheduled to wave at 3:30 p.m. ET.

Sponsors are going to force Rick to replace Kase y with Byron next year. 3 youngsters, stars of the future and 7 time champion Jimmie. What a team. Mark my words, I’m right, just like I called Bowman the day JR announced his retirement. Way to go HMS.

Regarding Justin Allgaier.
How come the crew chief doesn’t tell the driver to stop, stop, stop when everyone knowa the wheel lugs are missing?
I see people all the time feel they have waited long enough at an intersection and just pull out even if a car is coming.