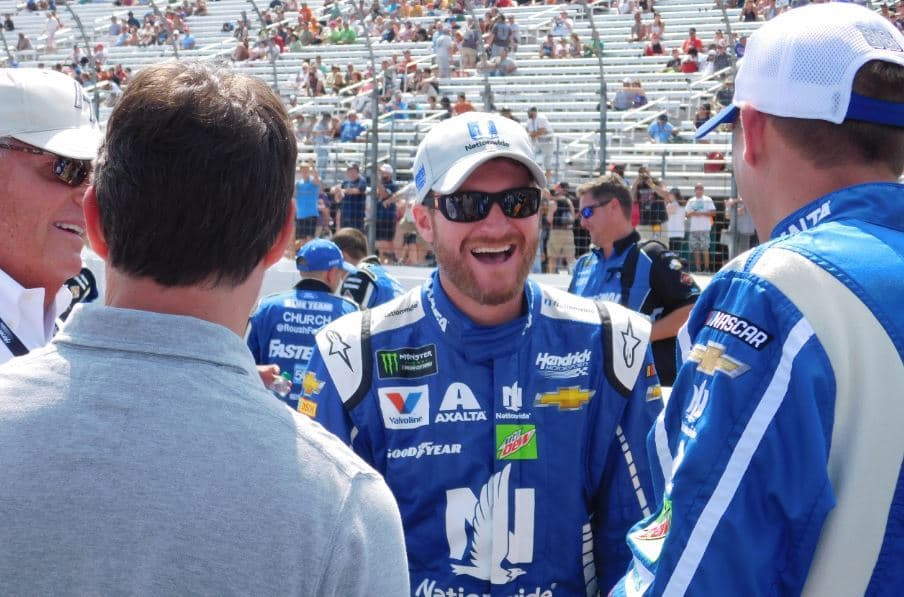 NBC formally announced this morning that Dale Earnhardt Jr. will be joining their broadcast team next season. Earnhardt previously announced his retirement, effective at the end of the 2017 season, and there was much speculation of him taking his talents to the television booth for either NBC or FOX. The deal was first reported by the Sports Business Journal.

“It is a tremendous honor not only to join NBC Sports next year but to begin a new career alongside people who love NASCAR as much as I do,” Earnhardt said in a statement. “To be reunited with Steve Letarte, to be able to call legends like Jeff Burton, Dale Jarrett and Kyle Petty teammates rather than just friends, to be able to continue going to the track and connecting with race fans, it’s a privilege I don’t take lightly. I will devote my heart and soul to this broadcast team and pledge my very best to the millions who watch it.”

Earnhardt’s deal with NBC Universal (not just NBC Sports) will become effective in January. NBC Sports’ deal to broadcast the second half of all Monster Energy NACAR Cup Series (and XFINITY Series) races goes through the 2024 season.

Earnhardt will join forces once again with his former crew chief Steve Letarte at NBC. Letarte has been calling races in the booth with play-by-play announcer Rick Allen and driver analyst Jeff Burton. It isn’t clear yet how NBC wants to insert Earnhardt into the mix, but a four-person booth seems like the most logical move.

“Dale Jr. brings credibility, personality, and popularity to our already winning NASCAR team,” Sam Flood, executive producer and president of production, NBC Sports, said. “Giving him a chance to spread further within other NBC Sports Group properties and throughout the company is an added bonus.”

The 42-year-old Kannapolis, North Carolina native has been in the television booth before with FOX Sports. He also has worked with the Motor Racing Network (MRN) on occasion.

Well, I guess if I hear Letarte’s voice less as a result, it can’t be all bad.
It will be interesting (maybe comical) with 4 guys in the booth all trying to get a word in.

I was really hoping for Fox and Waltrip (both of them) being retired.

and again, stevie wonder and ray charles could had seen this coming from a mile away.

guess we’ll be tortured with the waltrips on fox. i know dw was making noise about retiring and michael, well he has just GOT TO GO!

Whoo boy. The Hendrick Coalition, the NASCAR Mouthpiece and the Game Show Host. I feel bad for you folks who have to put up with that crew.

Awww crap. Its bad enough having to listen to his interview after he wrecks again, but to have to hear him all day in the booth? UGH!!!!

Mark
Reply to  Kevin in SoCal

Nobody’s forcing you to watch any of the broadcasts, are they? You may not know it, but you do have the power to avoid listening to any of them you don’t like. Try exercising it next time.

….ANd KEVIN HAS THE RIGHT TO HIS OPINION PREACHER MARKY MARK, AS HE IS EXERCISING HIS RIGHT…RIGHT HERE! GET IT MARKY MARK??

heh.
the waltrips must be breathing a sigh of relief.

It’s not like any of them can say what they really think of “the product.” They’re trying to fix the races by putting different toadies in the booth who can’t say how bad the product is.

No, they’re not trying to “fix” anything. Nobody in the past 30 years who’s ever been in the booth (announcers, drivers, crew chiefs) would ever say there was anything wrong with the product. They all wanted their paychecks. Nothing different at all this time.

Why didn’t he sign with FOX and DW and Jeff and Mikey?

I guess at least this way he might be around for the end of a race.

Awww…did you think that would be funny? It wasn’t. Maybe you should try to get some new material.

MAYBE MARKY TROLL, you should find a NEW website to preach your BS too. The holier than thou crap you spew, who the hell do you think you are, Our Lord or something? RG72 has been around along time, doubt you have, but if you have, you sure have not posted under a consistenant name. I at least have the guts and others to keep their same name! GOOD OR BAD!

Looks like former Hendrick employees have the market cornered. DW, Jeffy cover Fox, and now Letarte and Jr on NBC. Should be good if you like the Hendrick cars.

Well, DW seems awfully fond of Toyotas, so you just shot down your own argument.