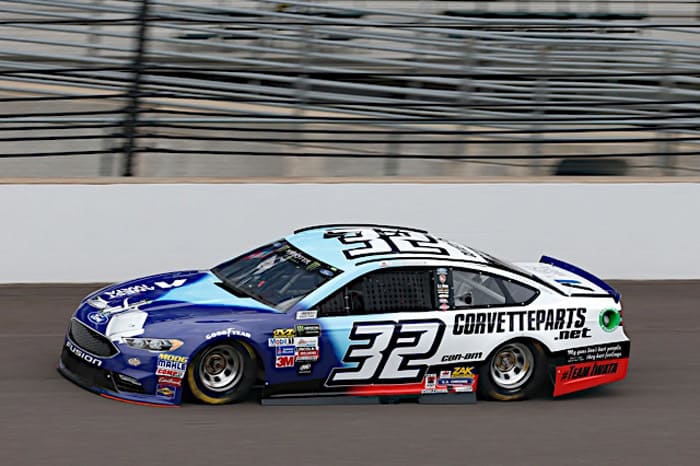 Indianapolis Motor Speedway isn’t exactly a track known for being kind to underfunded teams.  It’s a track where aerodynamics and horsepower rule, and enough of both of those to win races usually comes at a price too steep for most of the small teams, because it begins on shaker rigs and in the wind tunnel, something these teams don’t get to enjoy often, if at all.

But this weekend’s race became an example of the things that make a race work for any team: the right strategy calls at the right times, the ability of the driver to make the right moves on track and to avoid trouble, and a little bit of luck.  A few of the smaller teams displayed all three on Sunday, and it paid off in a big way for those who could package all three in the closing laps.

The race, well, that was a wreckfest to the point that Trevor Bayne had a top-20 finish despite failing to finish because of a late-race crash, but it also provided the chance for some teams to get some excellent finishes because they made a plan that turned out to work and stuck with it.

That also goes for the winning team, because while Kasey Kahne drives for Hendrick Motorsports, with all the trappings of owner Rick Hendrick’s very deep pockets, he didn’t have the best car Sunday…but his strategy game played out perfectly. Kahne came to pit road for service just before a late caution flew, and when others had no choice but to come in as well, Kahne regained positions as he was able to stay out, and that turned out to be the move that kept him in position to win.

Several of the smaller teams had played a strategy card earlier in the race, pitting for fuel in a window that would have carried them to the end of the race had there been no caution, and when they were able to follow that up with solid pit stops when the yellow flag did come out, keeping them toward the front.  From there, it was a matter of survival—caution bred caution and those who could manage not to be a part of them profited from them.

So, while Indy certainly wasn’t a good example of a typical race, it was the perfect example of how a race team can take advantage of the circumstances handed to them to get a great finish…or not.

Top of the Class: Indianapolis

Leading the way this week were Matt DiBenedetto and Go FAS Racing.  One of the teams that played strategy the right way, the No. 32 bunch gave DiBenedetto their best on the final stop and turned him loose.  DiBenedetto did an admirable job of holding off challengers while avoiding the chaos that kept unfolding in front of him and in the end scored the second top-10 finish of his career not on a superspeedway. IT was also the best finish Go FAS Racing has had in the Cup Series to date. The No. 32 team is doing a lot of things right this year, and it’s starting to show more and more.

IT was also a good Sunday for JTG Daugherty Racing, as the team scored a pair of top 10s with Chris Buescher finishing ninth and AJ Allmendinger just a spot behind in 10th.  It’s a rarity when the top three finishers in this group are all inside the top 10, but this week, it was well deserved.

While he finished just outside the top 10 (12th), add Cole Whitt to the list as well.  Whit runs for a small team even by small team standards, but his TriStar Motorsport team has stepped it up on occasion this season and did so again on Sunday, grabbing a fantastic result.

Finally, while he was caught in a late crash and didn’t end up with a great finish, Michael McDowell was running for a top 5 in the closing laps and looking for more when an incident unfolded in front of him that left McDowell with nowhere to go. McDowell, given the right circumstances, is capable of winning races at the Cup level.

Yet another driver with a shot at a better finish than he had was Aric Almirola.  In his second race back after being sidelined due to injury earlier this season, Almirola was in the hunt for a top 10 before suffering damage in a late crash.  He was able to finish, and snagged a top 15 to boot, finishing on the lead lap in 13th for his best finish since the summer race at Daytona in 2016.

Yet another team making the most of the unusual Indy circumstances was Carl Long’s operation with Timmy Hill behind the wheel.  Hill came home 14th, easily topping his career-best run of 22nd at Kansas in 2012.

Ty Dillon suffered the consequences of a couple of late incidents, including a heavy crash on what would be the final lap of the race, and saw what might have been a top 10 run turn into a top 20.  18th place isn’t a bad finish for the Germain Racing bunch, but it’ll be one they remember for what might have been.

While, for the most part, the driers in this section are the usual suspects, it’s a bit harder to pin down their weekend because so many were involved in on-track incidents, including a few who had had a decent start to the day.

Landon Cassill finished 22nd, which would have actually been a decent enough run, except he was involved in one of the late incidents and had a pair of pit road violations which resulted in his being parked for the final five laps.

Gray Gaulding officially had a DNF in 24th, but the teenaged driver still matched his career-best finish, so it’s hard to call his day a complete wash. The same goes for Joey Gase, who finished 25th…take the number with a grain of salt, because he finished ahead of some big names even with his DNF.

Jeffrey Earnhardt was running at the end, but was several laps down from an earlier incident and wound up 26th, another finish that’s really not too bad.

BJ McLeod was also running at the checkers, but finished over 30 laps down in 32nd.  JJ Yeley (37th) and David Ragan (38th) tangled well before the halfway point.  Ragan was done fore the day, while Yeley limped his Tommy Baldwin Racing machine around for a few laps before another incident put the nail in his coffin for the day.

Corey Lajoie brought up the rear of the field, finishing 40th after a single-car incident just nime laps into his day.

Mark Smith, owner of the No. 72 TriStar Motorsports team for driver Cole Whitt, has passed away after a long battle with cancer.  The team released the follow statement via its Twitter channel.

Matt DiBenedetto adds new sponsor Dick Stevens Jerky to the No. 32 for this weekend’s race at Pocono.

“It’s so great to have Dick Stevens Jerky join us this season” DiBenedetto said. “I know I’ve said it a million times, but I’m having so much fun this season with our team, sponsors, and fans, and it’s phenomenal that we get to work with cool companies like Jeff’s (Eckert, President of Dick Stevens Brands),” said Den=Benedetto in a team release. “I look forward to getting them to the racetrack this weekend and really getting to know their brand more as we build our relationship. Being workout focused like I am, I think this is a great product that I can honestly relate to. Low sodium, gluten free, high in protein, and great for people on the run like me.”

We are excited to announce that @dickstevens Jerky will be joining us as a sponsor this season, starting this week!https://t.co/Iy4ZUaiwnO pic.twitter.com/hyRu0tdkn4

Hats off to @mattdracing, who scored a top-10 finish at Daytona earlier this year, & did so again yesterday at @IMS: https://t.co/FJ7JLYbovD pic.twitter.com/JqYHovhnxk

NASCAR parked me yesterday for "disobeying red flag orders". This is my official statement: @CSX pic.twitter.com/Eef5oHWE8A

Driver 72,whoever that is, is the wreck avoidance MVP!

White/Blue Moen car, blue numbers at the back, inside line.https://t.co/tAcLXWZg03