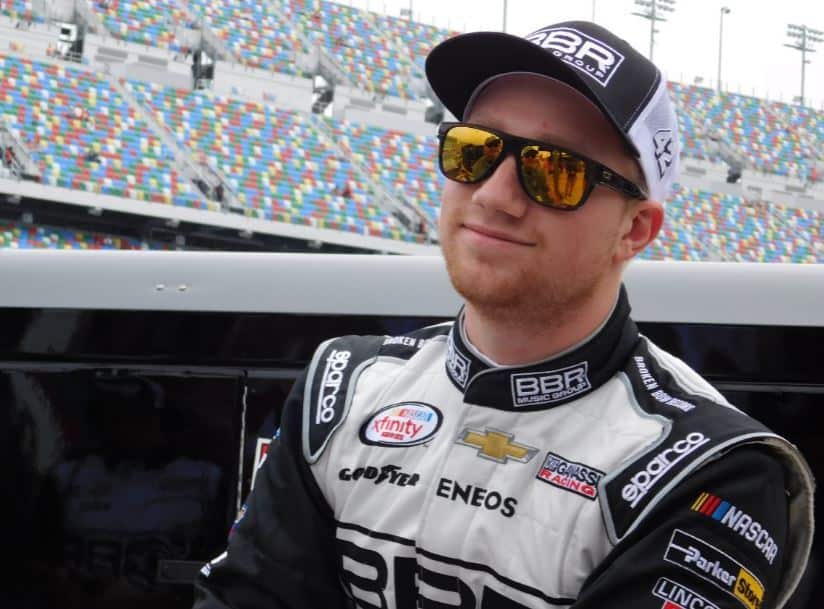 Tyler Reddick is known to be an aggressive racer. His development in the NASCAR Camping World Truck Series with Brad Keselowski Racing elevated him to the next level, giving him a chance to prove himself with Chip Ganassi Racing in the XFINITY Series.

Through nine starts, the 21-year-old has a best finish of third, along with two other top-10 finishes. As Reddick methodically attempts to learn how to drive a vehicle incredibly different to what he formerly knew, he is leaning on teammates Kyle Larson, Brennan Poole and Jamie McMurray, each of whom are helping the three-time Truck Series winner adjust to life in NASCAR’s second-tier division.

Frontstretch spoke with Reddick, discussing his role at Chip Ganassi Racing, expectations for the rest of the year, working with his teammates and what the future holds for the California native.

Joseph Wolkin, Frontstretch.com: What’s the experience of racing in the XFINITY Series been like so far?

Tyler Reddick: It’s been a big step. In the Truck Series, everybody takes it very seriously – not discrediting those guys – but when you step up to the XFINITY Series, it’s like doubling the intensity. Everyone’s working really hard and the schedule is really tough with 20 straight weeks of racing. With the new inspection process with the line – if you have a failure, you have to go back on the line. It just makes everything more intense when it comes time for qualifying or getting the car through. I couldn’t be with a better team right now. These guys have a few wins on the year with Kyle [Larson]. We’ve had some good speed in the car, but it’s just a matter of being smart, trying to be smarter and learning from my mistakes.

Wolkin: How much pressure are you putting on yourself to perform?

Reddick: Not much. Obviously, I want to do as good as I can. This car is spot on every week. I need to figure out what I’m doing wrong and work on that.

Wolkin: How much do you lean on Kyle to get advice when you’re at the track?

Reddick: I do talk to him as much as I can about certain situations, things he sees on the racetrack and what not. It’s really helpful to look at the data from his Cup car and the data they have with the XFINITY stuff. It helps close up the gap and helps me understand what I’m doing differently. It’s just having that data with throttle, steering and brake-traces have made the learning curve much quicker. I’m very thankful to have the opportunity to look at that data to try to learn faster.

Wolkin: What are some ways that you break down the data?

Reddick: The biggest thing is you overlay the two. You have more than just data. You have Dartfish, too, which through the weekend is very helpful because you can visually see where you’re giving up time or driving in too hard. Wherever you’re missing on, you can see very well in Dartfish. You can overlay my data versus Kyle and really see the differences of where I’m giving up time and speed. It helps to figure it out much easier rather than being blind in the dark.

You can go over to Kyle and talk about it, but when you have all that data to look at on a device, you can see to the exact dot what they’re doing.

Wolkin: What is a piece of advice that Kyle’s given to you that has stuck with you?

Reddick: It’s probably not something he’s said over the course of time that I’ve been here, but it’s just being smoother with the throttle, brake and steering wheel. The trucks have so much downforce that you can get really aggressive with them. Here on the XFINITY side, especially this year with less downforce, it’s a completely different driving style you have to have now. I had to unlearn everything I learned in the Truck Series and I’ve came back to where I was when I entered the Truck Series. That adjustment has been difficult, but I feel like we’ve made big strides at it. Mike Shiplett has also helped me a lot with coaching me with things like rolling out of the center and jumping onto the gas, things like that. He does a good job at keeping me focused during the race, too.

Wolkin: How have you leaned on Brennan Poole when you have the chance to race?

Reddick: Most of the tracks we’ve gone to so far, I got to ask him a few questions. I haven’t had a whole lot of opportunities to bounce information off him this year just because of situations that have been present. When we’re on our own and not at companion races and Brennan is there and Kyle’s somewhere else, I’ll get a hold of Kyle to ask him something because he knows these tracks very well now, but Brennan is an easier outlet to get information from. From here going forward and over the course of the summer, we’ll be helping each other a lot.

Wolkin: You’re used to having a teammate at Brad Keselowski Racing. How different is the teammate mentality at CGR?

Reddick: These guys have Cup drivers and XFINITY drivers. It’s been really cool to get to know Jamie [McMurray] and Kyle. They drive the cars differently than one another, but they both find ways to make speed. It’s good to have both of those guys’ data and stuff to look at, and to ask them questions. It’s also really cool to have Brennan, who has a lot of experience in these cars, too. When I had [Daniel] Hemric, he was a really good teammate and we worked together a lot and helped each other a lot. Me and Brennan just have to do everything we can to help each other when situations require it the most. At the end of a race, it’s not happening. But during a race, whenever working together can help, it’s about the big picture at the end of the day.

Wolkin: How do you feel like you fit into the fold with this team?

Reddick: I feel like I get along with everyone really well. All of the guys with the [No.] 42 car are a really good group. We have a change coming up after Michigan. Rich Muckenthaler has been in NASCAR longer than I have been alive and he’s finally hanging his hat up. Our new guy, Chris Enos, has been coming in, shadowing Rich the past month. I get along great with everyone on this team, and I believe heavily that a happy team is a good team.

These guys are all really happy to be here. When things don’t go your way and you’re all good friends, you still leave the racetrack happy. When things go really good, everyone’s really happy and that’s what it’s all about. Everyone’s on it right now, and I couldn’t ask for a better formula right now. There’s pressure to do good, but knowing all the variables that are always present, I don’t have to worry about that very much.

Wolkin: Mike Shiplett is a very experienced and well-known crew chief. How has he helped you adjust to the XFINITY Series?

Reddick: In every way possible, whether it’s giving feedback on the car or getting me up to speed better. When we’re at the simulator, he’s coaching me all the time. He reminds me what I need to do. Derek Kneeland up on the spotter’s stand has really done a good job at that, too. He reminds me to get settled in and hit my marks, roll through the center and don’t rush to the throttle.

It’s the things I involuntarily remind myself, but it’s good to hear those guys in my ear throughout the race. These races aren’t Cup races for sure, but they’re still longer than truck races. Charlotte was probably the most difficult so far because my helmet fan/blower fell off. That race was definitely one of the most tiring races that I’ve done.

Wolkin: How do you deal with something like that when things go wrong inside of the racecar during a race that’s a few hundred miles long?

Reddick: I just stay focused. It’s funny because I didn’t even notice I had a problem until we were well past halfway. By that point, I felt like I was going to pass out. All of that hard work not only conditions yourself physically, but mentally in case something like that does happen and you can be prepared.

Wolkin: What do you feel like you need to improve on throughout the rest of the season?

Reddick: I feel like at the mile-and-a-halves I could’ve mustered some better finishes. That comes down to being aggressive at certain points in the race and trying to make up too much when I didn’t really need to make anything up. It’s about being more patient. The cars are great, so I just have to be smart and be there at the end of the race. I just gotta get better with things like that.

Wolkin: You spoke a little about the downforce differences in the trucks compared to the cars. How has the transition been?

Reddick: There were a lot of competitive trucks in the Truck Series last year, but there are about 10 to 15 cars that can win on any given weekend. Everyone is just that close – like one pit stop away or a good adjustment or restart – away from being a race winner. The competition is much tougher. The cars are a lot more difficult to drive, but they’re a lot more fun to drive at the same time.

Wolkin: How difficult is it for you to watch the No. 42 car on the track with Kyle racing instead of you?

Reddick: It’s not my car, so it doesn’t pain me to watch it. Yeah, I’d like to be in it, but it’s not my car. It’s Chip Ganassi Racing’s [No.] 42 car. I’m just glad to be filling in with the positions they’re allowing me to and I’m just thankful to partake in these events. It’s not difficult at all. I love watching Kyle get in there and winning for these guys, leading laps and kicking a*s. It’s great. It makes me feel really good at the end of the day when these guys come home with a win. I like seeing the guys happy and I like being a part of it. I couldn’t ask for a better team.

Wolkin: What’s your goal for the future?

Reddick: We just have to play it as it goes I guess. As the year goes further on, we’ll see how that shakes out. I know it’s my first XFINITY year, but I really need to win a race this first year. I need to try to win a couple. The car is good enough. It’s already won three races with Kyle. This car is capable of doing it. I just need to do my part and not overdo it. These races are long and we have to be there at the end to pull it off. It’s just a matter of how bad do I want it and how hard do I prepare for it. I need to make the right decisions throughout the race to put ourselves in position to win the race. There’s a lot of variables that come into play, and if I do everything I can to manage those, we’ll be there.