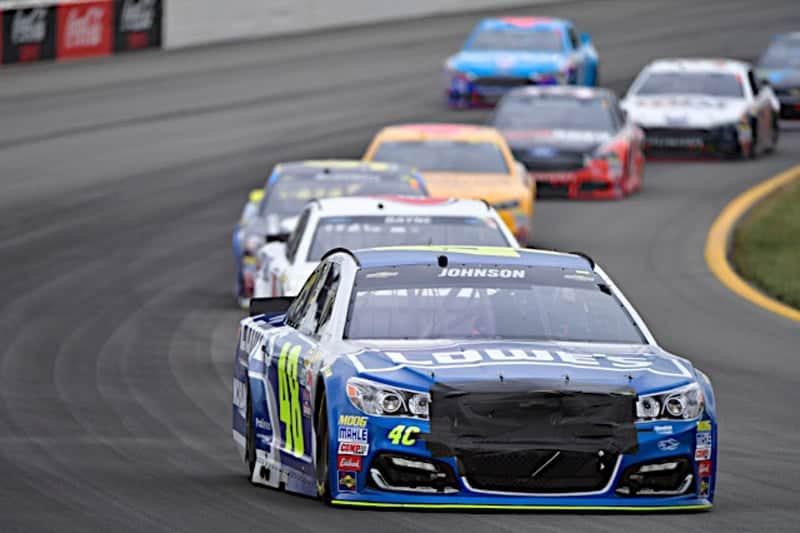 1. A groundhog that regretted its decision and another that probably didn’t

As driver Stephen Leicht found out the hard way in 2012 during a practice session at Pocono, in racecar vs. groundhog, the racecar wins. Leicht was the driver unfortunate enough to hit the rodent as it crossed the racing surface, and there wasn’t much left afterwards, as this video shows.

This wasn’t the first groundhog to cause a disruption at Pocono, either One of its cousins wandered onto the track as Sterling Marlin was turning a lap on pace to set a track record. The groundhog made it, but in the process tripped the electronic scoring beam, voiding Marlin’s lap. What would have been a pole-winning run gave way to a much slower lap, making Marlin perhaps the only driver in NASCAR history to be knocked off the pole by a woodchuck.

This cute little fox was hanging out on an access road as the XFINITY Series drivers prepared to take to the track for qualifying earlier this year. What unfolded next looked like a scene from Looney Tunes as several track workers, armed with a large net, tried to corral the fox. The fox, holed up inside a SAFER barrier, was having none of it, so the workers barricaded it in to keep it safe and relocated it later.

If Leicht was surprised when he hit the groundhog, imagine Neil Bonnet’s shock when he hit a deer at speeds in the neighborhood of 200 mph. There’s nothing funny about a deer vs. vehicle crash, as it rarely ends well for the deer and can also cause serious injury to the driver.

Bonnett was uninjured in this incident, though he was forced to pit road with extensive damage. As the story goes, the postrace pit report listed “Bambi” as the reason for the untimely exit of the car from the race. Also according to legend, there was a deer leg embedded in the grille when Bonnet rolled into his pit. Other versions have the entire animal stuck in the front end of Bonnett’s racecar.

Or maybe it was a chicken; reports from drivers varied. Ken Schrader thought his team was calling him a turkey. Whatever it was, the poultry caused a caution during the 1991 Champion Spark Plug 500. You just can’t make this stuff up, folks.

And then there was that one time a person (inebriated race fan, hmm?) wandered onto the racing surface. During a race. Kyle Petty was battling for the lead with Davey Allison in June, 1993 when they raced through Turn 1, only to see a person standing on the track. Petty signaled to Allison to slow down just as Allison also saw the person there. The wayward trespasser jumped out of the way at the last minute and ran off into the Pocono afternoon.

Petty went on to win the race, though he said later that he remembers the fan on track more vividly than winning the event.

“A full-grown man standing in the middle of the racetrack? No, not in your wildest dreams would you ever anticipate that,” Petty said in a 2017 interview with The Sporting News. “(It) seemed like I was right on top of him.”

You forgot the Race of Champions for the Modifieds on the 3/4 mile track. Back when there were real race cars in Cup.

Amy, nice article. RCR just lost a ton of sponsorship money with Menards leaving. Richard said today he is going to run three cars next year but I think he’s blowing smoke. With sponsorship being as tough as it is today I think he is going to have a hard time getting big money for Austin who has only a fuel mileage win to show for 4 years of cup racing. Ty didn’t get an Xfinity championship and hasn’t been great in cup so another hard sell to sponsors. And if he keeps Newman instead of releasing him early then he has a driver who hasn’t been great in cup except he used to win poles years ago while Jimmie win championshis. THE is going downhill fast, a second tier team like Roush. I’m 2 years Richard will need a partner or sell part of the team. Either next year or the one after will have rcr a 2 car team consisting of the Dillon boys and Richard heading to the poor house. You can bring your grandsons to the party but you can’t teach them to be good dancers. Milk for that ulcer Richard.

Does anybody remember “Digger” was on every track, every week. LOL.