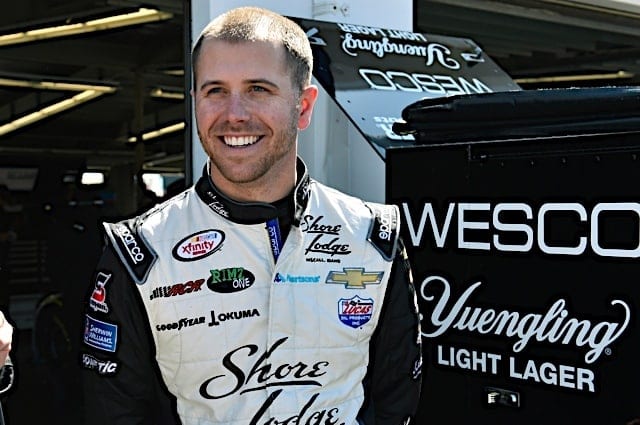 Will Brian Scott Win in Return NASCAR Race at Iowa?

When the XFINITY Series rolls into Iowa Speedway, we are likely to be treated with a fresh field twice a year.

This time is no exception, as there are multiple new faces who will start Saturday’s U.S. Cellular 250. From smaller teams to some of the series’ powerhouse organizations, we could have a true newbie hit victory lane this weekend.

One of whom is Brian Scott, who makes his first NASCAR start since Homestead last November and his first in the XFINITY Series since 2015. He will race the No. 3 for Richard Childress Racing.

Looking at his experience, he is expected to be a solid performer on Saturday night. Still searching for his first win, Scott grabbed 20 top-five finishes in 208 starts, a career that went full time from 2010 to ’15. The Idaho native was particularly fast at the short tracks, leading 348 laps at Richmond with five straight top 10s and scoring four consecutive top 10s at Iowa with a best finish of third in his most recent start.

His best career race also came at Richmond in 2013 when he started from pole and led 239 of 250 laps before Brad Keselowski snookered him on a late restart.

But for this weekend, a lot has changed. He had his first and only full-time Cup season in 2016 for Richard Petty Motorsports and made the decision to step away from racing to spend more time with family. The surprise news took him out of the spotlight for a few months before being put back in the hat for this weekend.

Will he need to knock some rust off against the competitive non-Cup field? Or will his experience show up first?

It came right down to the wire last time out at Pocono Raceway, but once again Kevin Harvick didn’t seal the deal.

In a thrilling race with Ryan Blaney for the checkered flag, Harvick failed to make the pass in the final laps, trailing the first-time winner by 0.139 seconds.

With 33 starts and more than 5,500 laps turned at the triangle track, Harvick has not lifted a trophy in the Monster Energy NASCAR Cup Series at Pocono Raceway. It’s by no means a bad track for the 2014 champion, but is one of only three tracks he has failed to reach victory lane. For a 36-time race winner, that’s a surprising stat.

It is even more surprising when you look at both his performance in 2017 and as a whole in Pocono. This year, Harvick has a win, three poles and 545 laps led. The June Pocono event was a comeback race after qualifying 12th.

But the loss highlighted his track record which has become a trend in the last three years. Harvick has finished second in three of the last six Pocono races, bumping his top-five number to nine and making Pocono his sixth best track in terms of top-five finishes.

Though it may not have been of fan’s best interests to see Harvick win these races (as he finished second to the Wood Brothers, Martin Truex Jr.‘s underdog win in 2015 and Dale Earnhardt Jr. in ’14), the time may for that first win may be now. He has since gone to victory lane at Sonoma and Indianapolis last week was a continued step in the right direction for his flat-track performance.

What Could an XFINITY Win Do for Sam Hornish Jr.’s Career?

The Iowa field was just too good to pass up on another burning question. This one, like Brian Scott, also includes experience and even gave us a little insight last time the series raced at Iowa in June.

This was Sam Hornish Jr., the Verizon IndyCar Series champion who raced for RPM in Cup in 2015 and is now back to part-time XFINITY opportunities for the top teams.

Like Scott, Hornish is one strong short track racer, especially at Iowa. Starting from third in the June event, Hornish was an early exit after Christopher Bell got loose and took out Hornish in the Team Penske No. 22.

Despite the 37th-place result, Iowa has seen very little disappointment for the 2012 championship runner-up. With seven consecutive top-10 finishes from 2012 to ’16, Hornish grabbed two wins with Joe Gibbs Racing, including a phenomenal run in ’16, leading 183 laps.

So, Hornish can and will likely be a strong contender Saturday. But an even bigger question is how this could affect his future in NASCAR. His four full-time seasons in Cup didn’t return stellar results while his two XFINITY seasons in 2012 and ’13 were highly competitive.

There has been and always will be more talented drivers than available seats, but Hornish has a foot in the door of Roger Penske, Richard Childress and Joe Gibbs as much as any driver. What could a win on Saturday do for his career?

Is Joe Gibbs Racing the Team to Watch in Pocono and Iowa?

Joe Gibbs Racing finally has a Cup win in their pocket after Denny Hamlin took the checkered flag at New Hampshire a couple weeks back… but only one?

With six races to go in the regular season, Kyle Busch has remarkably gone without a win despite leading more than 1,000 laps. Matt Kenseth has been an occasional top-five contender while Daniel Suarez is continuing to pile in the top-10 finishes. Meanwhile, Furniture Row Racing is stacking up stage wins and has three race victories with Martin Truex Jr.

Many said there has been an internal rivalry between the two affiliate teams. This may have just been rumors, but after seeing No. 18 crew chief Adam Stevens confront No. 78 crew members (with both crew members seeing suspension from JGR after Indianapolis) it may actually have gotten the gears turning toward this weekend.

It was a shocking moment when both Truex and Busch hit the Turn 1 wall last Sunday. The drivers are known as two of the best wheelman in the Cup Series, so seeing them destroyed in one corner was a little unexpected.

Unfortunately for Busch, it wasn’t his first major disappointment in 2017 and this weekend’s track will only remind him of it. Last time at Pocono, he once again had the car to beat, leading 100 of 160 laps before late pit strategy left him hanging on to a top 10.

With Busch, the leading man in getting back to victory lane, this weekend’s radar also turns to the XFINITY side, as the team has youngster Kyle Benjamin back in the No. 18 and Ryan Preece starting his second and final race in the No. 20. Both drivers are in different positions career-wise, with 19-year-old Benjamin just starting his national career while Preece is hoping to hang onto this opportunity with a top team.

Either way, both kids are expected to be up front on Saturday. Preece finished second at New Hampshire while Benjamin, despite finishing no better than 16th, has qualified an outstanding second, first, second in his three starts.

Whether it’s bottled-up frustration in Cup or pouncing on an opportunity in XFINITY, JGR has plenty of storylines to follow this weekend at Pocono and Iowa.