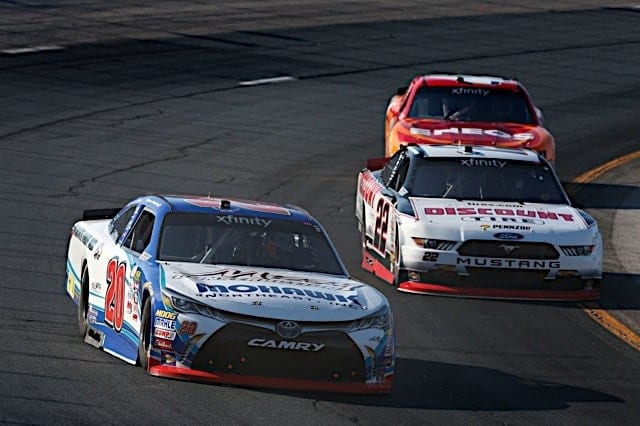 Ryan Preece finished second two weeks ago at New Hampshire Motor Speedway, capping off one of the more popular runs in 2017 for the XFINITY Series.

Preece was hometown racer getting his first start with a premier team at his home track. Throw in the fact he ran up front for the entirety of the Overton’s 200 that day with Joe Gibbs Racing and you have one epic coming-together between driver and team.

While spending a year with JD Motorsports in 2016, Preece managed only one top 10 with the lower-funded organization, choosing to step out of the No. 01 ride in hopes of finding a better opportunity. While he also competes in the Whelen Modified Series, the 26-year-old is now in a competitive stock car. Well worth the wait indeed.

But it doesn’t stop there, as Preece with return to the No. 20 for the second and final scheduled time this weekend at Iowa Speedway.

Frontstretch spoke with Preece the day before his first start at New Hampshire to talk about the planning behind the move and how he is racing for the Friday night racer.

Zach Catanzareti, Frontstretch.com: Jumping back to XFINITY this year, let’s start with the simple question: how did this all come together?

Ryan Preece: A lot of it was dominoes falling. When Carl [Edwards] retired, Daniel [Suarez] moved up, or I knew Daniel would move up. What happened was, Kevin Manion called me and said ‘Hey, I don’t know if you heard but there are probably going to be some open races there, you may want to put your name in there.’

He gave me Steve deSouza’s number and I called him and left a voice mail. That night, I heard back from Steve and it got the ball rolling.

Catanzareti: What was that time like for you? You had other things on the table, but this is a huge opportunity.

Preece: I was excited for it. I trade two races for now [rather] than what I was doing [at JD Motorsports]. We’re making gains at it but it’s a step in the right direction. I have to do what I came here to do and that’s to finish top three or win. We’ll head in that direction and be good.

Catanzareti: You talked about expectations but it’s a short window, only two races. Is there more pressure just having those two chances?

Preece: No, because I think it’s a lot better than a lot of racers are going to get — you talk about ‘If I only got that shot’ — but sometimes you only need one. It’s nice to have two. let’s put it this way; I have a second chance. I’m looking forward to it. I just have to do what I’ve done my entire life and that’s race.

Catanzareti: It was an interesting offseason, you were with JD last year but you took that off. This seems like that opportunity you were waiting for and it came.

Preece: That was a huge part of why I stepped back. I didn’t feel that doing what I was doing was going to get me really where I wanted to be. I felt like I had to make myself available and step back, go up north. I’ve learned so much on racecars working on my modified. This is a whole different level of the ball game when it comes to how things are done. I’ve become a better driver because of it.

Catanzareti: Ward Burton had an issue with that when he stepped out of racing. He sat on the couch and waited for that phone call and it never came. Was there ever any doubt you weren’t going to get that opportunity?

Preece: That’s always a possibility for sure. You never know. There are thousands and thousands of other racecar drivers out there in this country who are trying to get that same ride. You know… I did everything I could and that was to run all of last year. We ran good with Johnny and the phone wasn’t really ringing so I needed to make the opportunity come and show everyone I deserve to be here.

Catanzareti: You in this car is very popular. The regional series are happy to see you in this car. You talked about those thousands who will never get this chance, do you feel you are racing for them to show that regional guys can do it?

Preece: It’s so funny, I joke with friends that this is one for the short track guys. This is one for the guys who won’t get that opportunity, the Friday night racers. And this is an opportunity to go do that. That’s what I’m proud of and hopefully we can do it for them.

Catanzareti: We see Cup guys go down to the regional series and they bring a lot of attention and light. Do you feel that it’s a healthy gel between grass-roots racing and the national series? Or does it need help?

Preece: I think it’s huge. You need both, you know what I mean? It’s not only that you need the Cup guys or the big three, you need the guys who are at the grass roots and coming up and having that feeder system. A lot of the reason why I have such a big following here is because I’m a local racer, I’m not somebody who came up through different touring series and nobody ever really established a fanbase. I have a big fanbase up here. So, my plan is to do it for everybody.

Catanzareti: Is this your shot? Do you feel these two races can secure yourself with Gibbs or another big team?

Preece: I think it can start something. It could hopefully put me in a position where I can move forward in this. But we’re not going to think ahead, we’re just going to try and get it done here.

(Below is a video capture of our conversation with Ryan Preece)