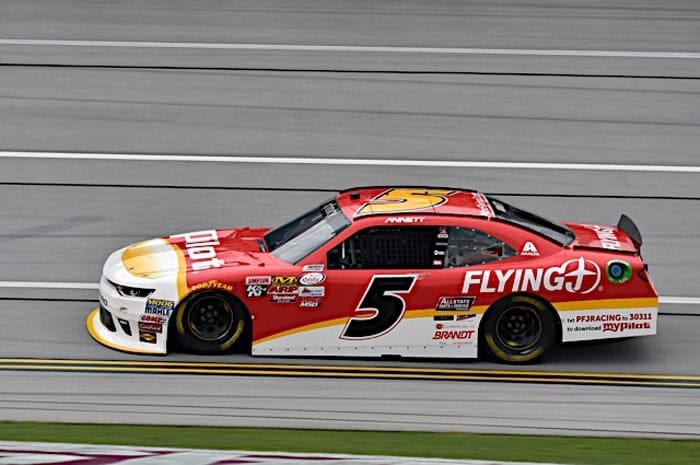 Prior to the 2017 XFINITY Series season, Michael Annett had spent the last three years in the Monster Energy NASCAR Cup Series. Coming back down to the series where he made a home for six previous seasons, it looked to be promising, especially competing for JR Motorsports.

Annett joined NASCAR veterans Elliott Sadler and Justin Allgaier, along with young sensation William Byron, all competing for a chance at the championship. However, 18 races in, the other three have left the Iowa native behind as they run first, second and third in the championship standings.

Byron has been triumphant in three out of the past five XFINITY Series races, and this weekend it’s back to Iowa Speedway, the site of his first win just five weeks ago. Allgaier has dominated three races, picking up his solo victory at Phoenix International Raceway in March. Sadler, on the other hand, has led the overall championship standings after all but two events this season.

In those same 18 events, Annett has five top-10 finishes, which is more than he had in his last full-time season in the XFINITY Series competing for Richard Petty Motorsports in 2013 (though missing eight races due to a concussion at Daytona). But the No. 5 car has never crossed the finish-line higher than sixth, which was also at Iowa. Ironically enough, he has one– sixth, seventh, eighth, ninth and 10th-place finish, making up those five top 10s.

Though he’s on pace to currently make the playoffs, Annett is not content with running toward the back half of the 12 drivers that make the postseason.

“We’re disappointed, but we’re also not terribly upset about it,” Annett told Frontstretch, regarding his 2017 campaign. “With our teammates being first, second and third in the standings and us down where we are, it’s nothing to be excited about. We’ve put ourselves in a place to get into the playoffs and hopefully having three-quarters of the season underneath our belt, we will have a chance to go out and win that championship.”

In early November, it was announced that Annett would be joining JRM. The 31-year-old believes that joining the organization so late put he and rookie crew chief Jason Stockert behind the eight ball.

“I think it’s just we were a team that was put together late and we’re growing as fast as we can,” Annett mentioned. “We’re learning each other, between myself, the crew chief, the guys that work underneath the cars. We’re just trying to grow as fast as possible and be as efficient as possible.

“Looking back on the success that JR Motorsports had last year, Elliott and Justin fighting for a championship, the expectations were to go out and win races, and be a contender to win the championship. That’s a little bit of a disappointment because we’re not up there with them right now, but it was a tall task and we put a lot of pressure on ourselves. I think it’s coming and it’s just been a little slower than we thought it was going to be.”

Compared to the last few seasons in the Cup Series, it’s been a night and day difference, according to Annett. He is assured an opportunity to win, as long as the No. 5 team is able to capitalize and put a full race together.

While his three JRM teammates run first through third in the point standings, Annett is mired back in 10th, 53 points above Ryan Sieg, who is the first driver outside the playoff cutoff in 13th. But in order to earn more points, specifically stage points, the team needs to do a better job unloading fast off the truck.

“I put a lot of it on me,” Annett said of not keeping up with his teammates. “I’m willing to say that my weakest spot is probably qualifying. The way the stages are now, we’ve missed out on a lot of stage points because we haven’t qualified where we should be qualifying. If you don’t qualify in the top 10, it’s hard to get into the top 10 with the way our series is right now and how competitive it is. We’ve just missed out on a lot of stage points that my teammates have been acquiring.”

Annett ranks 12th out of full-time XFINITY drivers, spending 29.1 percent of laps inside the top 15. The No. 5 has made 1,002 green flag passes, ranking fourth in the series. But with an average finish of 17.4, it’s halted his chance at competing for victories. Three DNFs in the past nine races have also buried the team back in 10th in the standings.

His crew chief, Stockert, is in his first season as a NASCAR crew chief at any level. The inexperience at the top of the pit box, and Annett not being in an XFINITY Series car in nearly four years had made the transition back to the top preliminary series a bit of a challenge. However, the duo have a past relationship at Rusty Wallace Inc., where Annett raced in 2011. While Jason Overstreet called the shots, Stockert was an engineer on the team, en route to a ninth-place finish in the championship rankings.

And though Annett is fighting for his playoff life, making the jump to JRM has revived his career.

“It’s been everything and more,” Annett said about his time at JRM. “The people–starting with Dale and Kelley [Earnhardt Miller, co-owner of JRM], who kind of runs the place. Her work ethic and how well she knows the people, it really just feels like you’re a part of a family, which as big of an organization as I thought it was going to be, I didn’t know it would be that close knit.”

Heading back home this weekend, Annett is looking to improve on his sixth-place effort that he recorded five weeks ago. In nine career starts at the track, he has a best result of fourth, coming in 2012. It’s up to he and the No. 5 team to gain momentum toward their run at the title because the pressure is on.

I’m sorry, but Annett is a mediocre driver. JRM needs a better driver there.

Just think, keeping the Xfinity race at IRP would have saved all that angst about putting on an entertaining race.