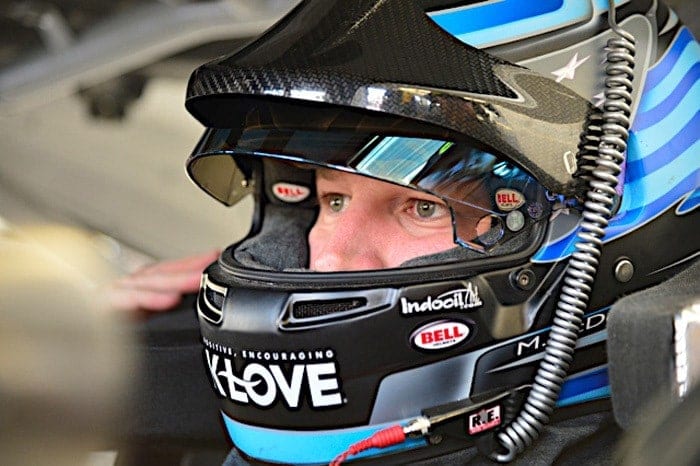 With less than a handful of laps remaining in Sunday’s Brickyard 400, Michael McDowell was in prime position to improve a career-best effort of fourth, coming earlier this month at Daytona International Speedway.

Getting involved in one of the cautions that caused the final 10 laps of the event to last more than an hour, McDowell’s top-five effort was derailed to 18th, though still recording a career-best 18th-place finish at the famed racetrack.

This season has been a year of bests for the 10th-year driver.

On top of that, the No. 95 team has completed 5,630 laps this season, the most at the Cup Series level. It’s safe to say McDowell is proud of where he’s at in his racing career.

“We’ve had some good runs and building off some good momentum from last year,” McDowell told Frontstretch, regarding his 2017 season. “Obviously, like everybody, you have some ups and downs. We felt like there have been some races that we’ve capitalized and other races that we didn’t. All in all, I’m really happy with the progress our team has made and continues to make. It’s fun to be in the conversation.”

Though McDowell does have nine top-25 results in the past 10 races, he doesn’t base the teams success off top 25. It’s the speed in the cars that is more pleasing for the Phoenix native.

“We’ve been executing during the races and not getting ourselves in trouble,” he said. “As far as the streak of top 25s, that’s not really that big of a deal to me because I feel like we should run top 25 every weekend.”

McDowell, 32, is in his fourth season for Leavine Familly Racing. In each of the past three seasons, it’s been a partial schedule, running a high of 31 events in 2016. In 2014 and 2015, the team fielded racecars in a combined 35 races, finishing as high as seventh in a rain-shortened event at Daytona in July of 2014.

Evidently, 2017 will be McDowell’s first full-time season of his career. In 2013, competing for Phil Parsons Racing, he ran in 33 events. But now that he is familiar with LFR, he expects the results to come on track.

“Continuity and more strength back at the shop and more strength on the road with our guys,” McDowell says of how LFR has turned the corner in its program. “It’s been a process of growing every year and adding people and that’s a big part of it—people that are making things go around is where the rubber meets the road.”

With an organization that has 28 total employees, Leavine Family Racing is one of the smallest at the Cup level. However, starting an alliance with Richard Childress Racing prior to last season has benefited the team, and continuing into this season, it’s been one of the most important factors of why the turn around has been so rapid.

It’s not a surprise to McDowell that the team has upped its ante.

With seven races to go in the 2016 season, Bob Leavine, team owner, hired veteran crew chief Todd Parrott to oversee the No. 95 car, pairing him with McDowell. Over the course of Parrott’s 23-year career at the Cup level, he’s recorded 31 victories, the last of them coming in 2013 at Watkins Glen International with Marcos Ambrose.

Though most of his success came in the late 90s and early 2000s with Dale Jarrett, Parrott has been one of the X-factors to the growth of Leavine Family Racing.

“He has brought speed to our racecars,” McDowell said. “There is no doubt about that. With his experience, his drive and his success in the sport has really helped kick start the end of last year and the owners have done a great job of putting people around him to help us grow in those areas that we needed to improve.

“I think he has more of an old-school approach with working on the fundamentals. He does a great job of preparation before the races and maximizing our cars, our bodies, every aspect of it. It’s just everything. It’s not one person, it takes a whole team to do it and we’ve got a good team.”

However, though having the alliance with RCR, and having the speed it once looked for, LFR is still running on a low budget. Whenever WRL General Contractors is the primary sponsor, which it has been 14 times in 20 races this season, its ultimately a cover up so the car is not blank. The company is a “parent company” to LFR and is on the vehicle because the business is doing well.

The lower budget also leads to a lot of missed opportunities. Whether its with the chassis, bodies or setups of the racecars, the team can only imagine where it would be if it had more resources.

“We’re not able to update as fast as everybody else,” he mentioned. “Just being able to have more resources and be able to add more infrastructure and more people, which would help us have more wind tunnel time. We’ve never been to the wind tunnel. We’re doing this kind of old-school. We have an alliance with RCR, but we’re not developing our cars based on our time at the wind tunnel, we’re doing it based on the knowledge we have with great people back at our shop that are more capable of doing so, but with limited resources is tough.”

With six races remaining until the playoffs begin a victory would solidify McDowell’s chances at a championship. This season the likes of Ricky Stenhouse Jr., Austin Dillon, Ryan Newman and Kasey Kahne have all found Victory Lane, so who’s to say it’s out of the question that McDowell doesn’t pick up his first-career victory prior to the postseason?