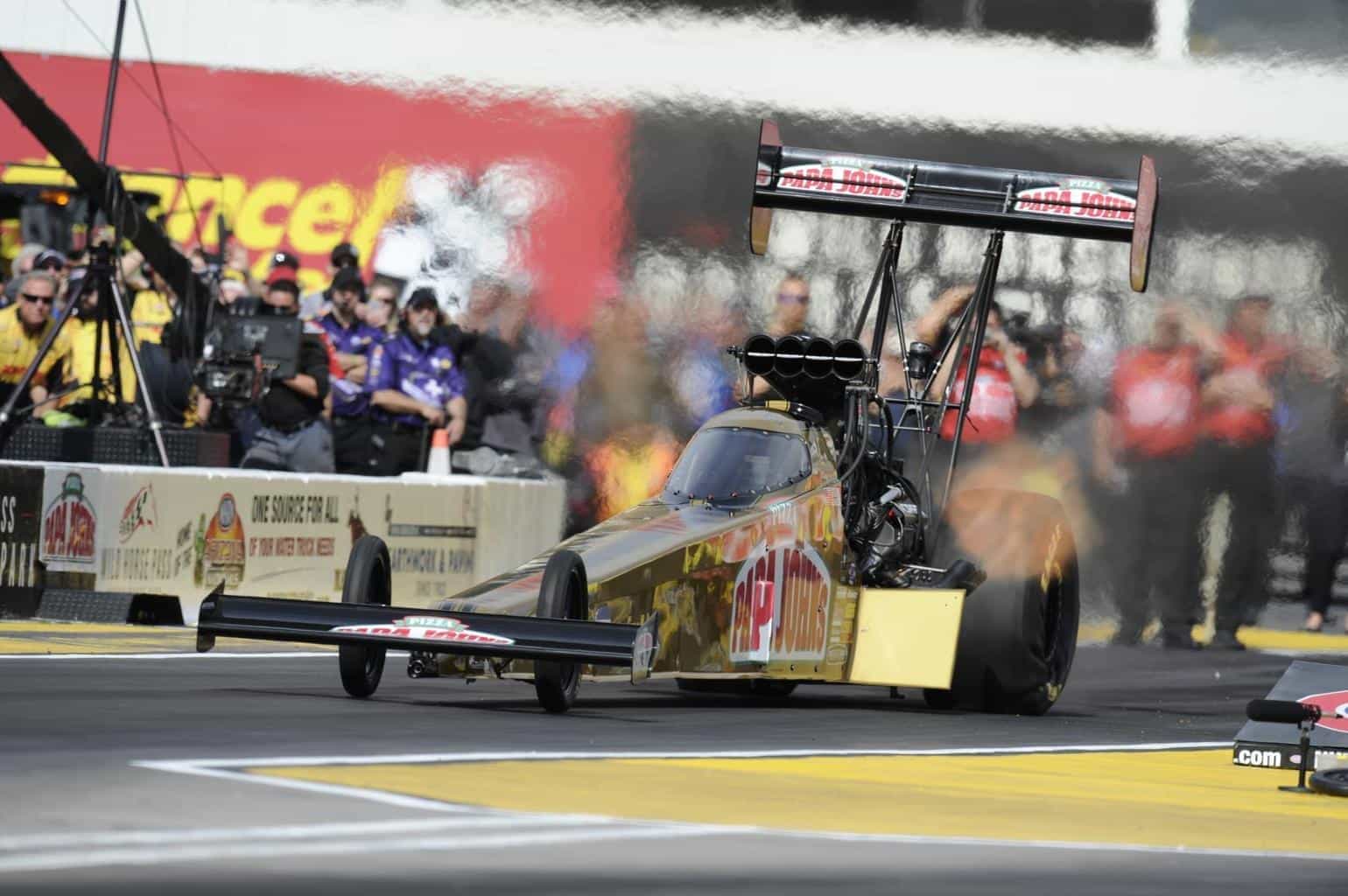 Name a large, well-known, non-automotive industry corporate sponsor that’s involved in NHRA drag racing on a high level. Papa John’s. Everyone has heard of the pizza chain. OK, there’s one. Name another. Monster Energy. OK, an energy drink so that one works. Energy drinks are not quite as big a market as pizza, but it still works. Mello Yello, made by Coca-Cola works, and I’ll allow it because I didn’t exactly specify team sponsor so I guess the series sponsor works. Keep going.

I’ll make it a little easier. Stick with just the three professional four-wheeled classes that run a full slate of 24 events and leave the two-wheelers out of it. (It’s moot-there aren’t any large, well-known, non-automotive/motorcycle product sponsors in that class.) A full-field for an event is sixteen cars, and while I concede they run short at times, let’s just say for sake of argument that it gives roughly a combined total of 48 cars to pull sponsors from.

There’s DHL. They ship packages. All kinds of packages. They don’t have to have anything to do with the automotive industry. Tequila Patrón, which of course sells tequila, although I wouldn’t consider an alcohol company, particularly one selling hard liquor, to have quite as mainstream an appeal as pizza or soft drinks.

And there’s, um, well, um. Yeah that might be it. There are other big-name sponsors, but let’s look at them for a minute. Matco, Snap-on and MAC make tools. Tools they hope you might buy to work on your car.

Parts Plus, NAPA, Advance Auto Parts, Summit and JEGS sell parts. For your car. Valvoline, Marathon, PEAK, and Amalie sell motor oil and other automotive fluid products. Mopar Express Lane will help you change out those fluids. They are a quick service center for stuff like oil changes.

SealMaster sells pavement sealer and the automotive realm is of interest because many people use those products on their driveways and garage floors. You can use them on sidewalks and other paved type surfaces, sure, but most people seal driveways. Driveways exist because we have cars.

The U.S. Army is not a corporate entity, and neither, of course, are Infinite Hero or Make-A-Wish, who are not directly funding the cars on which they appear in any case. Recall that I said well-known corporations, and in my opinion, most people have no idea what Levi, Ray & Shoup does.

So the sum total among three classes running as many as 48 cars is five and that’s if you count the overall series sponsor in there. The bottom line is that the large companies that have the money to fund a team are not involved in the sport.

Looking at the remainder of the sponsors, heavily weighted toward the automotive industry, it would appear only automotive products believe the viewers and the people in the stands are their target demographic. Or, the more mainstream products don’t believe there are enough of these viewers and fans to justify the expense to have their logos on a car.

It’s a bit of both I imagine. Automotive companies know that drag racing, possibly more than any other form of racing, is likely to attract the sort of people that have their own hot rod at home in the garage. Heck, there’s a whole slew of hot rodders right there at the track in the sportsman classes that they are marketing to, let alon in the stands or watching on TV. They are going for quality over quantity when it comes to their reach.

Corporations looking for that mainstream audience? Quantity. Definitely quantity. We all eat fast food or buy groceries. Sure, there are lots of people drinking beer at the race track. There are lots more who aren’t at the race track that can be reached through a commercial placed in a football game.

I don’t have an answer for this. I just hear people wonder aloud why there aren’t more big-dollar corporate sponsors interested in helping to support the sport they love. I just thought I’d give my take on it.

Grip was good at Bandimere, and as a result of all that traction, there were a few wheels-up launches, including this one by Tony Schumacher. The landing was a little rough however, bending the frame of Schumacher’s dragster and forcing the team to a backup car.