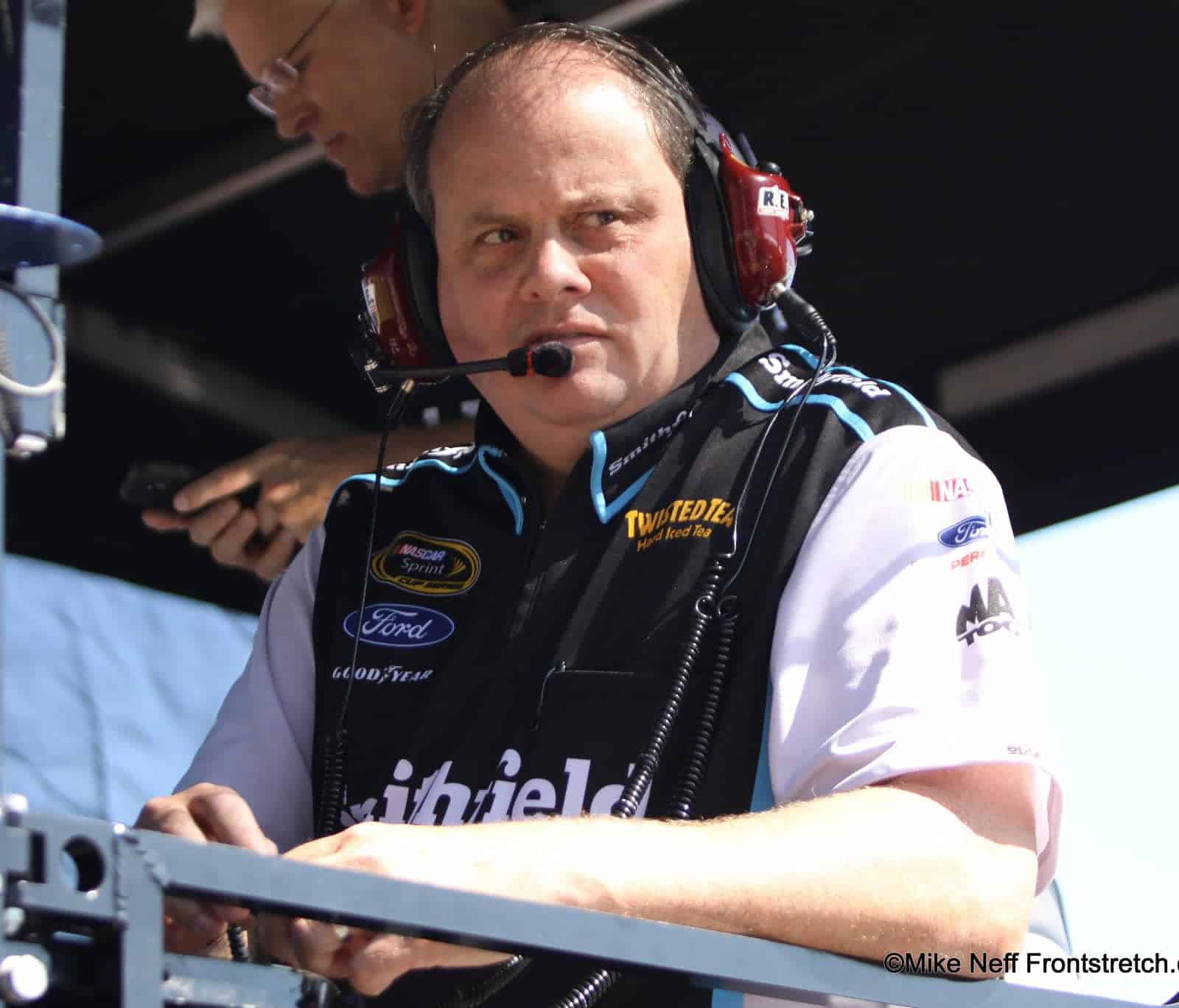 Kevin ‘Bono’ Manion has been around racing for years and spends a lot of time working on his Modified, which he races whenever he has the available time. He is currently a crew chief for Kyle Busch Motorsports after having led Martin Truex Jr. to multiple Busch Series titles and spearheaded several different Cup teams.

We talk about the fleets of vehicles in the Truck shops versus Cup teams. We analyze making a Truck road course ready and touch a little on how you select your vehicle for Eldora. We then delve into Modifieds. From aerodynamics to suspension and accessibility, we pick the brain of one of the best in the business at making one go fast.

Mike Neff – You are a crew chief in the Truck Series these days. You aren’t traveling nearly as much as you did as a Cup crew chief. Is it a good thing or a bad thing having so much time between races?

Kevin ‘Bono’ Manion – It is an amazing experience to be in the Cup series. I wouldn’t trade those days for anything. It was a lot of fun having that every day, daily grind. I kind of enjoyed it once I got into the rhythm of Cup racing. When you get an off weekend like this you better have something planned out. Some people like a staycation where they stay at home. Other people, their wives and families, have something all planned out. You’re gone from Thursday until Monday and then you’re back at it. The Truck series is an incredible fit for me, today, where I am at. I’m in a transition chapter of my life, trying to figure out what I want to do next. Being able to work around the house and spend time with the family more and still really be able to feel the competitive spirit of racing being in the Truck series. It is a win-win for me.

Neff – You’re with Kyle Busch Motorsports, one of the bigger teams in the Truck Series. As you prepare for the upcoming races on the schedule, how many different chassis are you working with? Cup teams have ten or 15 or even 20 for a team. Trucks are obviously different, do you have three or four or are you dealing with one or two?

Manion – We have approximately seven trucks. Really just two different styles. There is the speedway truck that is completely

different and then a do-all truck that will run anywhere. Cup they have road course specific, they have speedway specific, Martinsville specific, Intermediate specific, and short track specific. I would say we’re leaning down that path.

Last year I converted one of my short track trucks to a road course truck This year we are trying to get it in the budget and fit it in to have a road course specific truck. We go dirt track racing so you know that is pretty much a throw away body when you are done there. So you take your body that is beat up the most or a truck you want to rebuild afterwards or it is a ‘whatever fits in the schedule’ truck there.

With seven trucks with that range, even our championship crew chief and team, Rudy Fugle and the No. 4 bunch, really only had one speedway truck. We lean on the other teams to bring a spare. The amount of trucks is definitely less than the cars. You have a little more time to plan with the off weeks in-between.

Eventually, as you become established, and as NASCAR doesn’t change the rules, you can transfer an older truck into a dirt track truck. You can maybe make one of your short track trucks into a full-fledged road course truck. With that said, you use a lot of the parts. The trucks won’t be together all year. You’ll use the wiring, the oil tank, and you’ll rob everything out of that truck and put it in another truck. For the most part, we are about half of what the full-blown Cup teams have, as far as the amount of vehicles in the stable for a team.

Neff – You mentioned a road course truck. Is it a matter of the fact that you’re swinging right and left that you have to tweak the A-arms on the front of the truck to make them similar or is it more building in more room to accommodate more travel? What is the main change to make a short track or Intermediate truck into a road course truck?

Manion – You make it kind of symmetric. Your right front geometry goes on the left front so you can go left or right. The body is one of the bigger items. The height of the frame rails, when you make a road course specific truck, NASCAR still puts rules in place so you aren’t at a huge disadvantage bringing an oval truck to a road course. The trucks still have a lot of body offset to help them go left and a lot of side force. They do have rules in there so you aren’t completely building a straight-up truck. It is still basically your right-front geometry on your left front and down the road you go.

Neff – A lot of fans are aware, but some aren’t, that when you have the opportunity to go Modified racing you love to. Looking at a Modified, they appear completely different from a stock car. When you get down to the chassis on it, how much is similar and how much is different between the two?

Manion – The chassis are completely different. Completely different but the same in one. They have frame rails, a roll cage, the body is quite a bit less and Zoos fastens together where a stock car is welded out of metal and the seams are bonded. The bodies are quite a bit different and the appearance is quite different. When you get down to the suspension it still works all the same. Obviously different components, a lot lighter components on a Modified, a lot more bolt on stuff. The theory on making it turn left with toe and bump and caster and camber, all the same applies. It is just simple, basic mechanics on the geometry side. It is obviously quite a bit lighter vehicle. Your spring rates are quite a bit different. For the most part though, it is a race car and you make it as fast as you can by trial and error.

Neff – Do they use truck arms in Modifieds?

Manion – They do not. There are a handful or rear suspensions that you can run. Stock cars use a General Motors 1967 pick up truck truck arm. A Modified runs a couple of different rear suspension packages. Three link and four link type packages with a torque arm. You have two strut rods that hold it fore and aft and then something in the center of the rear housing that connects it to the car. Whether it is a torque arm or a J-bar setup type of rear suspension. You set your pinion angle and you are looking for traction. You can change your angles, similar with a Cup car or a Modified, of your lower rods, some people call them radius rods or steer rods or whatever you’d like to call them. A lot of this stuff connects the same and works the same, it is just a different animal.

Neff – Many people think that aerodynamics don’t come into play on short tracks. If you stick your hand out the window of a car doing 60, at an angle, you’ll feel downforce. With a Modified there is obviously far less surface area for air to impact but is there still some effect of aero on those cars?

Manion – Absolutely, a Modified is pretty neat to look at. I haven’t had one in the wind tunnel so I don’t know exactly what they make for downforce compared to a Cup car but, if you look at it, they look a lot like an IndyCar or Formula 1 car, which make tons and tons of downforce. As the air passes through you have a lot of surface area and there is a lot of air that hits the rear spoiler.

Downforce is key in any racing. There is no trade for horsepower and downforce. You generally want as much as you can. Then there is a little thing called drag, that we really pay attention to on the speedway cars. You have to realize there is a balance there. We really pay attention to that with the trucks and Cup cars. It is just another element that plays in, although not as much on short tracks. You look at a lot of these late models and different style cars around and they definitely pay attention to what the Cup guys do. It is nice to see little late models that build wickers and have good looking bodies and move the tails over. These guys are paying attention.

Manion – They bolt on basically the same way. I wouldn’t say it is any quicker than a Cup car. It is more accessible because you don’t have to stick your head under a fender. It is still a couple wrenches, nuts, bolts, tie rods, lower a-frame and upper a-frame. It is the same but there is no fender surrounding it. The casual fan in the stands can look right down and see it all. On a stock car you just basically just see the tire. You don’t get the x-ray vision of what is through the fender. You can change them pretty quickly but you’re still going to go down laps.