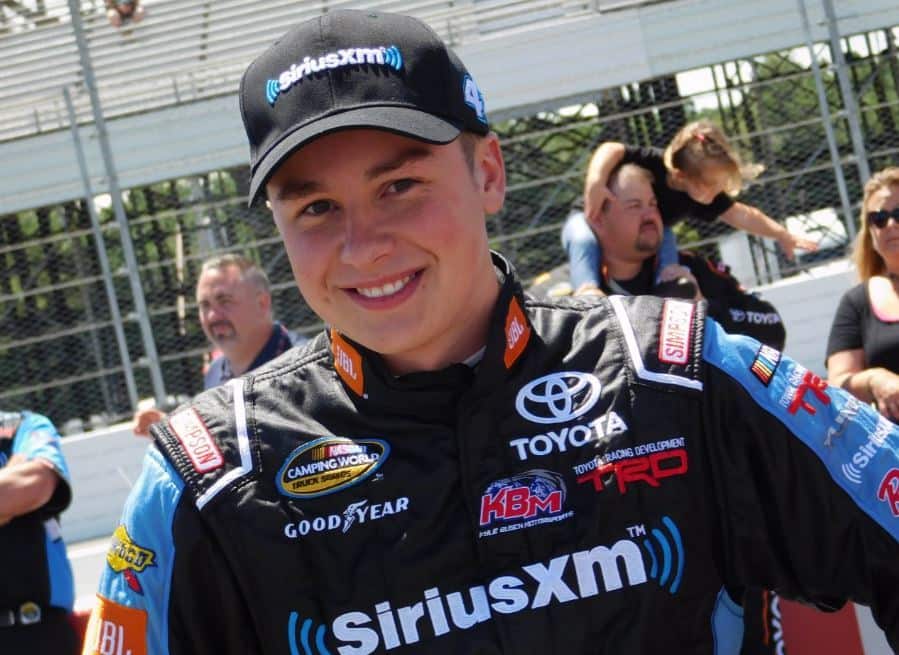 It came down to the wire with three drivers going for the win, but Christopher Bell bested the rest of the Camping World Truck Series field at Pocono Raceway.

Taking the lead from John Hunter Nemechek with six laps to go, Bell capped off a thrilling three-truck battle with Ben Rhodes in pursuit of the trophy. Jumping out to a two-second lead at the end, Bell went to Victory Lane for the fourth time of 2017 and first at Pocono.

“Our truck was a lot better than his,” Bell said of Nemechek. “I saw where he was struggling and started reeling him down. I kept trying to pass into Turn 1 but it was tough. I knew I needed to follow and figure out where I was going to pull the trigger.”

Nemechek was the one on the outside lane in the final laps, holding off Bell for a handful of laps before losing the top spot while on old tires. Falling to fourth, the two-time race winner this year had a fun time racing for the win.

“We were really good there for the short run,” Nemechek said. “As the run went on I got tighter and tighter. We’ll put that in our notes, bringing it home fourth. Decent day, nothing to hang our heads about.”

Rhodes had a run on the top two as they raced side-by-side, however, lost the momentum when Bell cleared for the lead. The pole-sitter wished he had 10 more laps to get back to Bell.

“I was trying my hardest to catch them and set up [the pass] properly,” Rhodes said. “I was just thinking about the pass, hoping they would still be side-by-side when I got to the straightaway. Unfortunately, I just didn’t have a big enough run.”

Ryan Truex finished fourth, his third top-five finish of the year, followed by Nemechek and Johnny Sauter to round out the top five.

These drivers were aided when Kyle Busch crashed in Turn 2 on Lap 36. Starting second, Busch led 32 laps before the accident took him out of contention.

“He definitely was running away with it in the beginning,” Rhodes said of Busch. “He definitely knows how to work the air, putting it to me in the first turn, first lap. It was hard enough to stay with him.”

A third truck in @benrhodes joins the fray… #NASCARonFOX pic.twitter.com/iY5okOLCED

I tuned in for the start until Kyle got to lead and tuned out to something more worthwhile. I tuned back in at the start of the segment and Kyle wasn’t in the lead. I wondered how long it would take before the entitlement disease kicked in. It wasn’t long. Kyle and the 24 bumped going into the turn. I first thought that Kyle got his right rear hit. but the over head view showed otherwise. I slowed it down and Kyle was just past the 24 when he jerked in front of the 24 and the back end went around. I could hear Kyle key the mic and say. “Doesn’t he know who I am?” I’ll bet there was no interview and even if there was everyone knows what he would say. It was an enjoyable race after that.