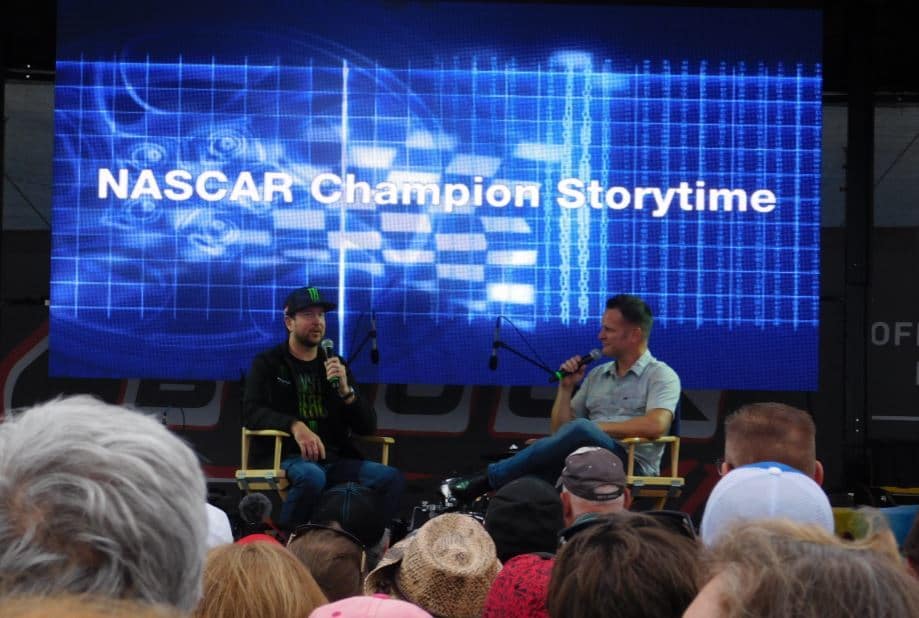 Pocono Raceway held it’s first annual NASCAR Fan Fest Friday evening, with several top names in the sport coming out and interacting with the fans. From signing autographs to taking pictures and even pretending to be rap star Eminem, it was a positive experience for most folks in attendance.

At the Fest, held at the Infield Block Party Stage, there were nine drivers who participated in the different activities, showing off their fun side. But like all things in racing, it was a competition.

The night started out with Landon Cassill and Martin Truex Jr. coaching a team of women as they took on the opposing team led by Dale Earnhardt Jr. and Ryan Blaney, who helped lead a pair of male fans from Canada to the victory due to “the Earnhardt family special sauce.”

Blaney, who won the June event at the Tricky Triangle, liked the turn out and believes this could be what takes NASCAR to that next step.

“If the stands aren’t packed as a driver, you don’t feel great,” Blaney said. “They don’t want to come and watch us race and it makes us feel bad. Coming out to do this, even though we are taking away a day of track time, this is honestly this is a little more personable to our fans. We get to come out sign a lot of autographs and have fun with them, and play fun games. If we do this the night before, or the day before, this is our focus. I’m all in for it if we keep doing these two day shows. If more tracks want to put on events like this, I would be in, really, every single time.”

.@DaleJr worked his way down this entire line. That was cool to see. #NASCAR pic.twitter.com/sBkIOnEcHx

Though in defeat, Cassill agreed with Blaney that interacting with the race fans is something that he really enjoys. The driver of the No. 34 car is also in favor of the new schedule NASCAR put together this weekend, having a pair of practice sessions on Saturday, while qualifying and the 400-mile event are held on Sunday.

“Pocono is one of the guinea pigs for this trial schedule and I think it’s a really good thing because a lot of these fans come here on Friday’s, and they see our cars on the track, but they don’t really get to see much of us,” Cassill mentioned. “Now, they are coming here on Friday’s and are really getting to see a lot of us, and they are not going to know any different. For the industry, we get an extra day at home. I think it should be good for everyone.”

This schedule will also be run next weekend at Watkins Glen International.

The next portion of the fan fest featured Kurt Busch partake in a Q&A with the race fans. The 2017 Daytona 500 champion answered everything from what it was like winning at the World Center of Racing, all the way to his support of the defending World Series champions Chicago Cubs.

Once looked at as one of the “bad guys” of the sport, Busch had a fun night engaging with race fans.

“It would be great to get more of that old-school NASCAR vibe in where you set it up as a family for three or four days instead of just being a race day warrior so to speak,” Busch said. “You want to see them out here all weekend long, having a good time with bonding experiences with the family. Whether it’s hustling through rain delays or different activities in the infield, its fun. This gives you that old-school vibe of how our sport was built.”

The next contest saw Kyle Larson and Ricky Stenhouse Jr. name particular songs. But the highlight of the night came when Michael McDowell and Daniel Suarez squared off in a lip sync competition.

McDowell, bringing out his fun side, proclaimed himself as the “Lyrical Gangster” dressed up as Eminem, rapping to “Lose Yourself” for his first song, solidifying a victory by singing “Free Fallin” by Tom Petty.

For the most part, fans were happy to have this festival. It allowed for them to get up close and personal with some of NASCARs finest, before they strapped up Saturday morning for practice.

Ohler also had a No. 88 die-cast car that he got signed in Earnhardt’s last appearance at the Tricky Triangle as a driver, a place he swept in 2014.

“It’s emotional because this is my last race of the year,” he said. “I actually looked at his hauler earlier and thought ‘man, this could be last time we get to see this.’ Knowing what he and his father have done for this sport, it’s just not going to be the same.”

However, not 100 percent of fans believed that this was a success, and actually wish that were cars on track, as well as watching the ARCA race.

This is so stupid and a waste of time! #PoconoFanFest

Former Pocono President and CEO Brandon Igdalsky declined to comment after putting this event together, but with the drivers speaking rather highly of the event, its likely that it will return in the future. While the sport is looking to cut costs, this could be a way to partake in weekly two day schedules, while engaging with the fan base on Fridays.

Pocono has always tried things to entertain the fans. I applaud them. Although it is the third closest track to where I live I have never attended a race. I just don’t like the track. It’s just to big and was not built for Stock cars.

We took a tour there a few years back and the folks couldn’t have been nicer. I fear that with Doc’s grandson taking that job with NASCAR, it may be inevitable that this track gets bought out in the near future.
Something is also strange about him declining to comment about this feel-good event. Usually that is reserved for a controversial issue.