That’s no knock on Preece’s driving ability, just his circumstances. In his first full-time season in a NASCAR national series, Preece finished 17th in points for Johnny Davis’ No. 01 team, scoring one top 10, before departing the series at the end of the year without as much as a sniff of a win. The modified standout ended up back in the Whelen Modified Tour for much of 2017, accruing two wins entering Saturday’s XFINITY event at Iowa Speedway.

Well, chalk up another win to his tally this year.

In the second of two scheduled starts for Preece in Joe Gibbs Racing’s No. 20 in 2017, Preece held off a charge from teammate Kyle Benjamin to win his first XFINITY Series race in the US Cellular 250.

Oh, and he won it from the pole.

Preece was visibly emotional in a Victory Lane interview, thanking multiple people — including his modified team owner — for getting him to that point.

His finishes since joining Gibbs for his part-time campaign now? First and second, the latter coming at New Hampshire Motor Speedway just two weeks ago.

Benjamin, meanwhile, also scored a career-best finish after coming home second, after previously finishing no higher than 16th in his maiden XFINITY campaign with JGR.

In fact, each of the top eight finishers had never won an XFINITY race prior to Preece’s eventual triumph. Brian Scott, back for his part-time schedule with Richard Childress Racing for his first start of 2017, finished third, followed by Brennan Poole and Cole Custer.

The series is back on track at Watkins Glen International next Saturday, Aug. 5.

Rutherford is the managing editor of Frontstretch, a position he gained in 2015 after serving on the editing staff for two years. At his day job, he's a journalist covering music and rock charts at Billboard. He lives in New York City, but his heart is in Ohio -- you know, like that Hawthorne Heights song.
Previous Ryan Truex Earns Season-Best Truck Series Finish at Pocono
Next 2017 Frontstretch Cup: Overton’s 400 Predictions

Chase Briscoe is back to his winning ways. He may not have had the fastest … 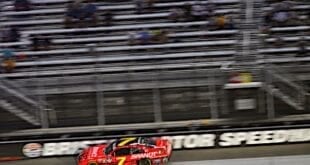