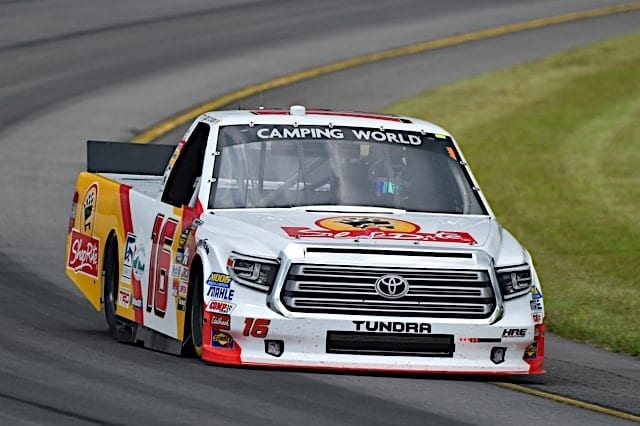 Restarts were the opportune time for making big moves at Pocono Raceway for the NASCAR Camping World Truck Series during Saturday’s Overton’s 150.

For Hattori Racing Enterprises driver Ryan Truex, restarts could have taken away a chance to end a three-race streak of finishing 20th or worse. Instead, things went well for the No. 16 Toyota, ending the day in third, a season-best for the New Jersey native.

“Strategy made it kind of tough near the end because we needed to start so far back,” Truex said post-race. “I feel like if I had a late-race restart to take a shot at them, I would have had a shot. I just ran out of time.”

Truex’s third-place finish brings him back into the playoff grid, moving from ninth to eighth as he overtook Grant Enfinger for the final playoff spot.

While Kyle Busch dominated the majority of the first two stages, Truex felt his truck could keep up with him given the track position. But when a handful of drivers pitted at the end of stage 2 to gain track position entering the final portion of the race, it put him near the back portion of the top 10, forcing him to work his way back up.

“I put a lot of pressure on myself coming in here,” he said. “Martin’s always run well here, and he’s taught me a lot. I like this track — I like flatter tracks. If the strategy played out and we got the lead on the last restart, we could have for sure won this race.”

Saturday’s contest wasn’t Truex’s first time in a NASCAR race at Pocono. He ran both Pocono races in 2014 with BK Racing in the Cup Series, finishing 20th in the summer event, which was his best result that year.

Truex remains winless in the Truck Series, but has three top fives and seven top 10s through 12 contests in 2017.