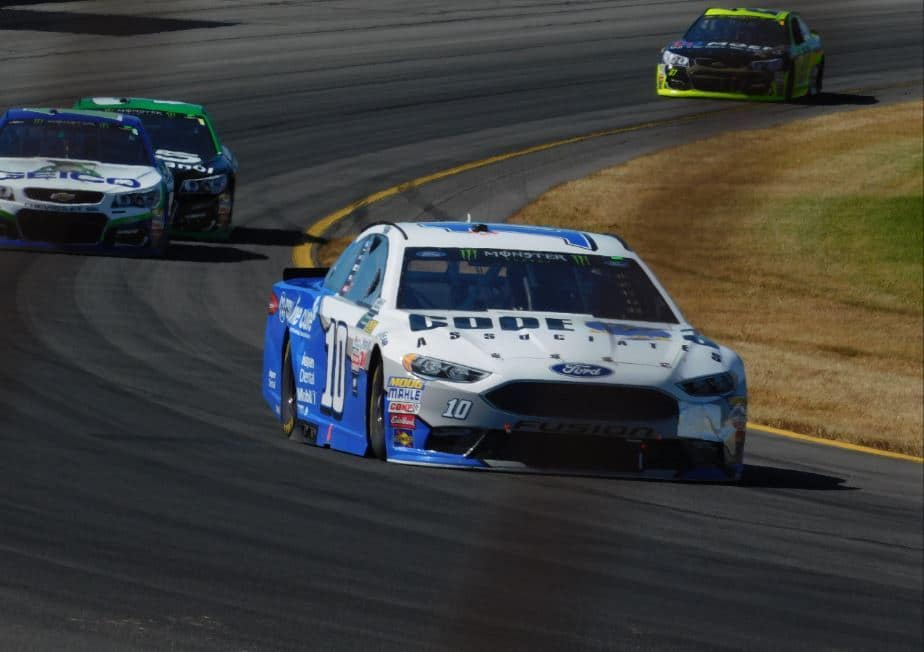 Danica Patrick is in the midst a mid-summer heat wave, and Pocono Raceway is the latest sight of her consistent runs.

The No. 10 car crossed the finish line in 15th, earning the team’s fourth straight top-15 result. This is her longest top-15 streak in her Monster Energy NASCAR Cup Series career after making her series debut in 2012.

“That’s what I should be doing, so I guess at the end of the day, it’s the cycle of luck coming back around because at the beginning of the year, we had lots of races where we were running better,” Patrick said post-race. “Really silly things were happening, like people blowing rotors and taking me out while I was just near the top 10. Things like that were happening a lot.”

The No. 10 car ran as high as third during the Overton’s 400. During a lap 1 incident when Matt Kenseth spun out to create a multi-car melee, Patrick had a light spin, but was able to work her way into the top five at the end of stage 2.

Patrick’s luck has significantly improved over the past month. With seven DNFs through the first 17 contests, she never had the opportunity to show she had a car to compete with her Stewart-Haas Racing teammates.

For the 4th time in a row, @DanicaPatrick finishes in the top 15. #NASCAR pic.twitter.com/Wso5zGXvpg

From a blown engine at Las Vegas Motor Speedway to being caught up in wrecks at Daytona (twice), Bristol, Talladega, Kansas and Michigan, she feels that she hasn’t caught a break.

“I think we would have had a whole lot more top 15s if not for that,” she said. “It’s kind of been the ebb and the flow of the season. Sometimes, it comes a little more here and there. But it seems like it came all at once earlier this year. I think is what we would have been doing at the start of the year.”

With Stewart-Haas Racing’s move to Ford this year, the organization has entered Victory Lane twice, with Kevin Harvick taking home the trophy after a dominant run at Sonoma Raceway and Kurt Busch’s win in the season-opening Daytona 500.

Patrick is now able to run on-par with her SHR teammates. The momentum she built after her first top 10 in over two years, which she earned at Dover International Speedway in June, is picking up.

Finally, she said, the No. 10 car is running like it should. With rumors of her possibly parting ways with the organization at season’s end, continuing this top-15 streak cannot hurt the Illinois native moving forward.

Another Top 15 and she can probably start prepping her Hall of Fame speech.

NASCAR needs to get plans on how to build a podium to acomodate the top 15 ……hell even Suarez is #10 as in previous frontstretch article, a day of racing firsts.

She’ll end up in the HOF just because she’s a woman and holds almost (if not) all the “first woman to” and “best finish by a woman” records. You take the word “woman” out of all of Danica’s accomplishments and she hasn’t done anything worth talking about and nobody would even know who she was. No male driver would have lasted this long. Even now, fans and sponsors and shying away from her because they can’t hide her mediocrity anymore.

Do you have ANY idea what a genetic handicap she has to overcome just to be an “average” NASCAR Cup driver? This is the ONLY sport that women compete directly against men – the average woman has less efficient muscles, less spacial awareness, more body fat, less upper body strength, and MANY other factors that are CRITICALLY important for athletes in motorsports (and she’s a tiny little thing at 5’2″ and 110 lbs).

Recently John McEnroe caught a HUGE amount of grief because he [accurately] pointed out that by her stats, one of the BEST female tennis players in the world (Serena Williams) would only be ranked 700th in the men’s circuit!

Even if you [unjustly] overlook her accomplishments despite being a female, she is STILL one of a VERY select few that have led [10+ green-flag] laps at both the Daytona and Indianapolis 500s and is the highest-ranked American EVER in UK Formula racing.

“number 10 car running like it should,” that’s participation trophy territory.

Too little too late!

Bunch of whiny nervous-nellies crying about a little good news about a great person and driver. Frightened of your own shadows and jealous that Danica is doing good, making money and still making headlines. You’ll be converting into a suicide pack when she wins the Glen. Kiss my ass, HaHaHaHaHaHA!

You tell ’em fanboy!
Bet you’ve been waiting 4 long years to be able to say something positive about princess sparkle-pony to all the NASCAR fans that have been down on her (not literally).

And how much money are you betting on that Glen win? … that’s what I thought.

She’s not leaving Ricky for you. Give up the dream.

Yellow flags and attrition are her very best friends. And the strategists on her radio telling her what to do certainly deserve their paychecks. These so called journalists should have their own hall of games for the shameless promotion of such a mediocre driver at best. Nascar Media and the TV networks have kissed her pampered little butt since day one thus diminishing the actual sporting aspects of NASCAR racing. Sadly, a joke. Kudos to to SHS for making something out of nothing.

At the end of this year, or possibly next, she will retire from Nascar racing. Another of the majority of drivers who never won a race throughout their careers. But she will have made a bunch of money, hopefully without getting seriously hurt, and brought some new fans to the sport. Thats won’t be a bad result for a persons career.

Why do Danica haters read articles about her?

doesn’t make much sense does it.

Bill B
Reply to  RandyFemrite

Because it irks us that she’s treated like a top tier driver when her stats suck and she’s never won a race. DUH!

Scott Lynn
Reply to  Bill B

One thing that helps with her good finish, no one is crashing her out.

Scott Lynn
Reply to  Tom B

Yeah….For the last 18+ years it’s been everyone else’s fault that she crashed and only has 1 win in her entire professional racing career.
Sure…Go with that. lol

Danica Patrick is the single most over hyped, over rated, UNDER achieving “athlete” in sports history. Danica has been a professional race car driver since 1998.
I challenge anyone to name even ONE athlete that has competed that long and has gotten anywhere close to the attention, hype, and fame and has only 1 (or less) victories in their career.
Sorry but the season isn’t just the month of July. She’s currently sitting at 28th spot out of 32 drivers to start every race this season with only 1 Top 10 this season.
“Popular” does NOT mean the same as “good”. Bottom line…She sucks.

Tom B
Reply to  Scott Lynn

Over hyped-no one put a gun to the media circus head, over rated-never saw her a favorite on the Vegas Line, under achieving-still has better stats then a lot of past and present drivers.
This IS a culture of popular, not good, i.e. Kardashians and before that Paris Hilton. There are a lots of athletes on TV I never heard of before.
You’re consumed with hate for this driver. Get over it, move on and try to enjoy life.

Scotty. Scotty, Scotty …….. wake up brother. Who cares about the amount of hype and attention she gets ? She brings attention to a sport that needs attention …. how many races have you actually been to this year? She’s now 10 points away from the middle of the pack in points after 7 DNF’s [ none of them she caused ]. Watch the race… enjoy the hype and lighten up and have a Coca-Cola ….RELAX !!! Lot’s more serious things out there in the world than Danica’s approval rating…right?

Scotty, Scotty, Scotty ….. take a breath. What’s all this upset about Danica…really? She brings attention to a sport that needs attention. Attendance is down at most tracks so the TV audience …… any hype is good hype. She’s worked herself back up to 28th in points and is about 10 points back from 25th. That’s after 7 DNF’s, none of which she caused. Oh, by the way, Scott…… how many races have you been to this year ..OR … any other year? I hope you’re just not a TV watcher and Nascar expert and analyst without actually being at a race. You wouldn’t be that guy….would you ? Enjoy the races… root against her or any other driver that you don’t like and isn’t a big name winner …just chill and have a Coca-Cola and RELAX !!!!! Lot’s more things to worry about in this world than Danica getting too much attention !