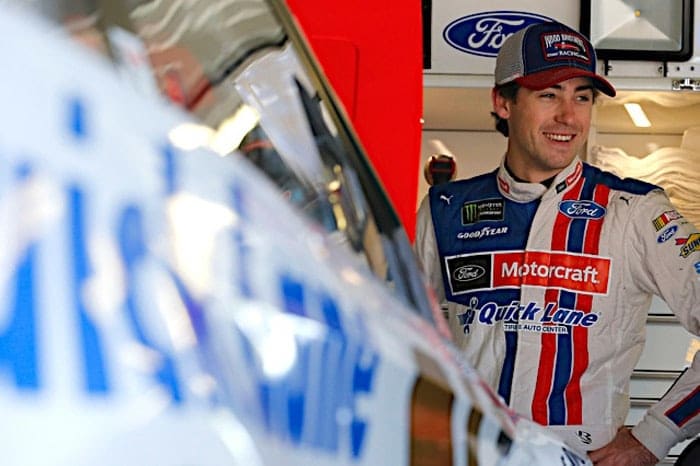 Ryan Blaney’s throwback style is continuing as he makes the move to Team Penske, whether owner Roger Penske wants him to shy away from white polo shirts or not.

Not many 23-year-old racecar drivers can get away with wearing a rooster shirt. But thanks to Wood Brothers Racing, Blaney rocked a team shirt with a rainbow-colored rooster during Friday evening’s Pocono Raceway Fan Fest.

Well, when he moves to Team Penske next year to pilot the No. 12 Ford, the plain polos with a sponsor logo on one side and team logo on the other will be coming out.

But Blaney, who won at Pocono in June for his first Cup triumph, is ready for the next stage of his career.

“I wanted to drive Cup cars for Roger, and that was my plan,” Blaney said. “It’s nice to see it come all the way through. It’s been a long five years for sure. I’ve been lucky to be with Brad [Keselowski’s] team and the Wood Brothers. It’s almost bittersweet because I love driving for the Wood Brothers and it’s such great history.”

The bittersweet moment has been one that is a long time coming.

Blaney started his NASCAR career with Tommy Baldwin Racing, when his father, Dave Blaney, raced in the Cup Series. But when the opportunity came for the youngster to join Team Penske with Brad Keselowski Racing, it was a deal he couldn’t pass on.

Now, Blaney’s young career is already coming full circle. He’ll be joining his former owner, Brad Keselowski, in Cup, along with Joey Logano. With Blaney leaving, Paul Menard will take over the famed No. 21 machine starting next year.

“Driving for Roger Penske is really special to me as well,” Blaney said. “He’s just as big part of the sport as they are. It’s nice to keep the Wood Brothers in the Penske house. We’re just addding another car. I think Paul [Menard] is a great fit for that team, and his family has been around the sport forever, too. They’re getting along really well. The main thing is finishing out this year strong and trying to get win [No.] 100 is really important. I’m definitely going to make the end of this year really fun.”

As Blaney departs from the organization he’s called home for the better part of the last three years, the reality is setting in.

“They’re great people,” he said. “They let me drive their Cup cars as a rookie. That’s really special to me that they allowed me to drive them for a couple of years. I will miss the Wood Brothers for sure. It’s really important that we’re keeping them part of the family. We’re not just bailing them. I’m still going to want to talk to them every week.

“I want to keep them part of our lives. It wasn’t really my call to go to the [No.] 12 car. It was something we were trying to do and trying to make all the pieces happen to start a third team for Penske. They want to grow. The Wood Brothers car was almost a third Penske car, but it wasn’t. I am going to miss it, and that’s why I’m going to make the most of the rest of this season.”

That third Penske one is one that raised questions about how much the team can handle. When the team had three cars in the mid-late-2000s, performance suffered, especially for the third car, the No. 77 machine. But when the team went down to two vehicles, the results proved to be stronger, with Keselowski winning the team a Cup championship and Logano has won 16 races since 2013.

There is concern from on-lookers that Penske will see a decline in performance with the extra car. Keselowski, however, disagrees with that sentiment.

“Hopefully it mean more depth,” Keselowski said. “More ability to extend resources engineering where you can make the car faster. The biggest battle that we have right now in motorsports is aerodynamics. The teams keep pushing aerodynamics further and further to improve that. It’s just really the time and energy that you can spend on it.

“The more people you have, the more revenue you have, the more that you can work in those areas with engineering tools or experiments to get better. There’s a lot of hope with respect to that. It’s just not aerodynamics. It also carries over to the engine side with Roush Yates Engines. and a number of other categories of depth. Whether it be pit crews or shop mechanics, fabricators and beyond. Assuming that it’s pulled off and executed in the right way at those levels it should be a gain for everybody at Team Penske.”

As Blaney transitions over to the Wood Brothers, it will be one that can make him a championship-winner driver. However, in the back of his mind, he cannot forget the sacrifices the No. 21 squad made to give him his first opportunity in NASCAR’s premier division.