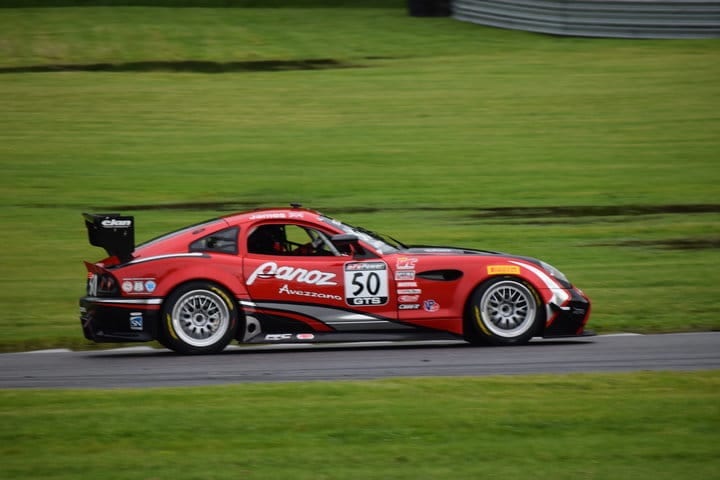 On Sunday, K-PAX Racing’s Àlvaro Parente earned himself a weekend sweep in the Pirelli World Challenge’s GT class.  As compared to Race No. 1, he did have to work a little harder, though.

Parente was originally supposed to start from the pole, but earned a three-spot grid penalty for conduct in race No. 1.  Despite that, it did not take long for the Portuguese McLaren factory racer to charge up to second.  At the beginning of the second lap, Parente was able to get past pole sitter Patrick Long entering turn 1 to take the lead.

Afterwards, Parente explained how he was able to triumph over Long.

“I managed to warm up my tires better than Patrick [Long] and that created an opportunity coming out of the last corner,” Parente said after the race.  “This allowed me to go quicker through the Carousel and prepare for overtaking.  [We] always [give] each other room…I had the best start today and finished well.”

At first, Parente opened up a two-second lead on Long and held steady for much of the race.  Only in the final 15 minutes did Parente increase his lead further.

By the end of the race, Parente was 6.628 seconds ahead of the veteran Porsche factory driver.  GMG Racing’s Alec Udell scored his best run of 2017 with a third-place finish.  The Ferraris of Kyle Marcelli and Daniel Mancinelli rounded out the top five.

In GTA, GMG Racing’s James Sofronas earned himself a weekend sweep, but it was by no means easy.  The top five drivers in the amateur sub-class were nose-to-tail and battling hard for much of the 36-lap race.  Sofronas won after fending off a last ditch effort from Wright Motorsports’ Michael Schein.

Afterwards, Sofronas was very impressed with the action.

“It was an awesome run today,” Sofronas stated after the race to WC Vision representatives.  “[Michael Schein] drove so clean. He pushed me again. I had to give it all I had. It was a great race and a great GMG team effort. I was managing my tires. I knew where I could hold off Mike and I was pacing myself. It was basically time to put it down but I couldn’t leave Mike. So, I just thought to myself to be smart and not make any mistakes. At the start, I made the mistake of letting the pros get ahead of me. I could have stayed with the group for a while and get a gap but I was trying to be smart and fair to the other competitors.

Sofronas beat Schein to the finish by approximately one-sixth of a second for the win.  Two seconds back was Champ 1’s Pablo Perez Companc in third.  Magnus Racing’s John Potter was fourth and Tim Pappas was fifth.  In GT Cup, Yuki Harata claimed the win by a lap over Marko Radisic.

In GTS, the race was much different as compared to Saturday’s jaunt where 70 percent of the race was run under yellow.  Lawson Aschenbach started from the pole and once again pulled a decent advantage.  However, unlike Saturday, Team Panoz Racing’s Ian James had the pace to stalk Aschenbach for much of the event.

James reeled in a two-second deficit to Aschenbach, then battled mightily around the 2.258-mile circuit for the lead.  After a series of defensive moves from Aschenbach, James was able to get to the inside at turn 1 with 18 minutes to go.  That move proved to be decisive as James was able to get past and put the Panoz Avezzano GT into the lead.  From there, James opened up a comfortable gap and held on for his third win of 2017.

For James, running down Aschenbach came down to playing the waiting game.

“The Camaro was a bullet out of a gun and I couldn’t keep up for the first four or five laps, probably a little bit due to strategy in tire pressures or downforce loads,” James said after the race.  “Then I inched up on the back of him and Lawson was driving a defensive pace in the Chevrolet. I couldn’t figure out how I was going to get by and then he got a little loose. I made a run on him and it was probably now or never at that point. It was a good race, I really enjoy this format and I can worry about putting a run together.”

James’ margin of victory was 1.917 seconds over Aschenbach with Harry Gottsacker close behind in third.  PF Racing’s Ernie Francis Jr. just squeaked out fourth by 14-thousandths of a second over Parker Chase.  Francis held onto the spot despite having two wheels in the grass at the checkers.

In GTSA, Blackdog Speed Shop’s Tony Gaples was determined to stage a comeback after causing a crash in Race No. 1 on Sunday.  For most of the race, things were looking good.  He ran off to a seven second lead in the subclass.  However, in the closing laps, GMG Racing’s George Kurtz was able to run down Gaples.  The two battled on the final lap of the race with Kurtz coming out victorious for the second day in a row.