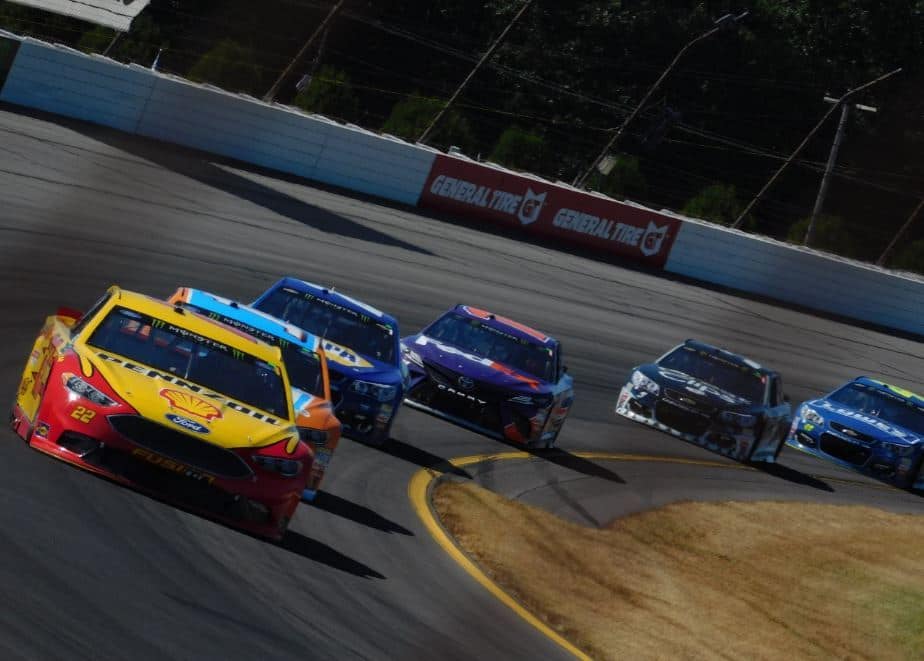 The second half of July has shaken up the Monster Energy NASCAR Cup Series playoff field.  Going into New Hampshire Motor Speedway, the 16-driver grid consisted of 10 postseason-eligible winners.  That left six spots open for drivers to get in on points.

Two of those racers, Chase Elliott and Jamie McMurray, stood 89 and 74 points respectively above the cutoff.  Both of those margins seemed pretty healthy at the time.  Clint Bowyer was less secure, only 24 points above the cut line.  Yet Bowyer had posted a few second-place finishes in recent weeks, and had generally run strong enough to be a likely playoff participant.

Meanwhile, Joey Logano was on the outside looking in.  Logano’s fast start to the season at victory at Richmond Raceway appeared to make him a shoe-in for the post-season.

But after NASCAR deemed the Richmond win encumbered, the No. 22 team fell apart, and a series of bad finishes pushed Logano outside the playoff picture.  Still, he was only out by seven points, and there was no reason to think that Logano, who could win at any time, was in real danger of missing the postseason.

However, the next three races produced exactly what the bubble drivers did not want to see, three new winners.

The first to strike was Denny Hamlin, who raced to victory in New Hampshire and snapped a long winless streak for Joe Gibbs Racing.  A week later at Indianapolis Motor Speedway, Kasey Kahne took advantage of a chaotic Brickyard 400 to emerge as the winner.  Kahne’s playoffs hopes appeared to be dead in the water after a series of struggles throughout his season, but his victory last week all but locks him in to the postseason.  Finally, Kyle Busch continued the trend of new winners, capturing the victory at Pocono Raceway on Sunday.

The end result is that there are now 13 playoff-eligible winners virtually locked into the postseason championship battle.  There will only be a maximum of three spots for drivers to advance on points.  Quite suddenly, the bubble drivers have found themselves in a much more pressure-packed situation, particularly after Pocono on Sunday.

Jamie McMurray’s 74-point advantage is down to 38 after getting crash damage at Indy and experiencing engine troubles at Pocono.  Elliott, who finished 39th after blowing a motor at the Brickyard, is only one point ahead of McMurray.  Bowyer’s late crash at Indianapolis dropped him out of the playoff standings.  A good points day at Pocono elevated Bowyer bac to 10th in points overall, but he remains 17 points below the playoff cut line.

As for Logano, he has experienced a mechanical failure at New Hampshire, clawed his way to a top five at Indy, and incurred two late pit road penalties at Pocono that have left him 69 points outside the playoffs.  The only bubble driver who is in a similar situation to where he was three weeks ago is Matt Kenseth, who holds the final playoff position.

With only five races remaining before the playoff field is set, there is still a chance that the Monster Energy Series could have more than 16 winners during the regular season.  Such a possibility would throw the playoff chances of Kahne, Austin Dillon and a few others back into question.  Yet however many new winners emerge in the final stretch before the playoffs, the Cup Series already features a fairly unique situation due to the number of drivers who have scored wins already.

Since NASCAR first rolled out the elimination-style playoff in 2014, the top division has never had so many different drivers win a race so quickly.

After 21 races in 2014, there were only 11 different playoff-eligible winners.  Kahne and AJ Allmendinger both scored wins in the weeks leading up to the Chase, while Kenseth locked himself in on points.  With Ryan Newman taking a comfortable 42-point cushion into Richmond, the last Chase spot came down to either Greg Biffle, Bowyer, Kyle Larson or a new winner.  Since Biffle had a 23-point advantage of his own on Bowyer, there was not much of a points battle at Richmond that year.

In 2015, the Cup Series never made it to 13 different winners during the regular season.  After Kyle Busch became the 11th different driver to win that season in the 16th race, there were no more new winners for the final 10 races.  In fact, once Busch cracked the top 30 in points following Watkins Glen, no driver moved in or out of the Chase standings until the field was set.  Racers like McMurray, Newman, and Paul Menard easily made the Chase without wins.

The 2016 season featured more top 30 drama in the forms of Tony Stewart and Chris Buescher.  Stewart looked on track to make the top 30 by the 21st race.  Buescher, who had just earned his first career victory, was more of a mystery.  Since the rookie was not in the top 30 in points at the time of his win, he was not among the 11 playoff-eligible winners who had secure Chase spots.

Buescher eventually did make the Chase, as did Larson thanks to a win at Michigan.  Elliott and Dillon held on to their Chase spots in the closing weeks, so the last spot wound up being a battle between McMurray and Newman.  Newman’s crash at Richmond ended that battle.

If the elimination-style playoff’s history is any guide, it is possible that we could see one or two more drivers win their way into the postseason.  However, we most likely will not see 16 winners, meaning that someone will get in on points.  What is truly different about 2017 is how fluid that points situation could be.  This season, there is no winless driver who holds Kenseth’s high points position in 2014.  Likewise, there is no winless driver like McMurray in 2015 who has a relatively comfortable points cushion and several winless drivers below him.  There is also no winner hovering around 30th in points.

In other words, every driver with a playoff-eligible win is relatively safe.  Anybody without one is not.  Additionally, the circumstances of the last three races have squeezed Elliott, McMurray, Kenseth, and Bowyer together, putting them in an unenviable position.  Do those four drivers now try to points race, knowing that there will probably be space for one or two of them to reach the playoffs that way?  Or do they count on more new winners and throw caution to the wind, trying to get wins themselves?  Furthermore, Busch’s win means that the winless drivers are out of freebies.  Any new winner would have to be one of the bubble drivers or someone deeper in the field like Logano, Allmendinger, Erik Jones, Daniel Suarez, or Dale Earnhardt Jr.

So, who’s in?  We will find out in what is setting up to be a wild five weeks.

….For Logano…crappy season so far. No speed, stupid errors..it adds up. Lot of self inflicted bullshit which is not the norm. No speed, bad calls by Todd. Logano keeps talking “we did it before” (as for a comeback) and got in the stupid CHASE OR PLAYOFFS. YES you did Joey, NOW you have an “encumbered” win (lol) for a part that more than one person said was so minuscule and had nothing to do with the Richmond win. Whatever, fact is..ENCUMBERED BY BIAS NASCAR (hasn’t Roger figured that out yet?) your CAR LACKS MAJOR SPEED THIS YEAR…The years you “came back”..YOU HAD SPEED!!! You have no speed, reality check please!!!!!!!!!!!!!!!!!!!!!!!!

Ooooh, isn’t it exciting seeing who is going to make the chase.

I guess giving out ‘stage points’, and ‘playoff points’ were supposed to be ways to keep fans intrigued enough to care who makes the not-a-playoff, right? All it does is make more crap to confuse what counts for what and where. frankly, I could care less.

Actually the Chase has provided more talking points which is needed in the ‘news driven world’ WE have created. I find talking about the 5-7 drivers who could make the Chase more intriguing than “do you think Chase Elliott can make up 200 points and win the Championship?” I’m not a big fan of the CHASE but starting to appreciate some of the aspects.

Bill B
Reply to  ArkyBass

You are missing the point. It should not be about having something to talk about at all. It should be who deserves the championship based on their performance (well, at least to those of us that don’t buy into the chase). If Driver X is 200 points out, then they don’t deserve to be in the championship conversation at all.

Bette Geraud
Reply to  Bill B