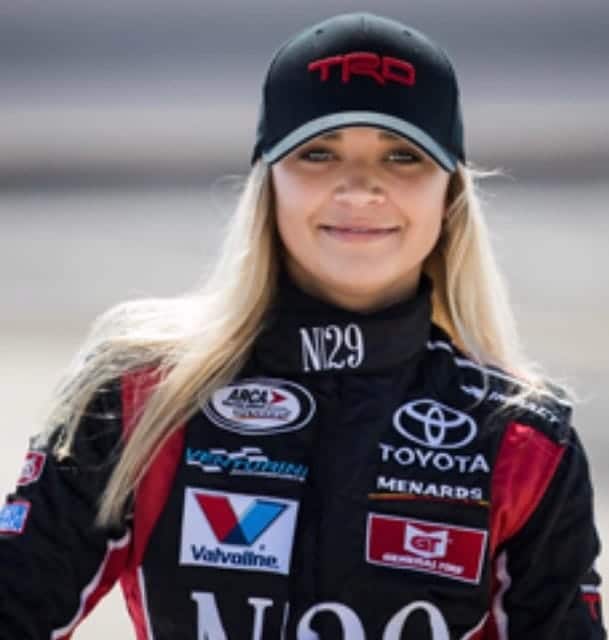 Heading into the 2017 ARCA Series season, Natalie Decker had little to no experience on tracks that the ARCA teams competed on. Joining an established team such as Venturini Motorsports for three events, her goal was to get better week after week.

Due to some success, finishing 11th in her series debut at Toledo Speedway and 13th at Elko Speedway, Decker was in line to run at Pocono Raceway in June, which she did, finishing 27th. Hoping to rebound from that disappointing day, the 20-year-old and sponsor N29 Capital Partners decided to give it a go at the second Pocono event in late July, where she picked up her first top-10 finish in her fourth start.

The Wisconsin native also added races at Road America (Aug. 27) and the season finale at Kansas Speedway (Oct. 20) to her schedule. Decker, former member of the NASCAR Drive for Diversity Program, hopes good results in these pair of races propels her career moving forward as she works up the ranks of auto racing.

Prior to finishing 10th at Pocono on July 28, Decker spent time with Frontstretch, discussing her goals for the remainder of the season, what its like working with Venturini Motorsports, the longest tenured team in ARCA, as well as who has helped her in her rookie campaign and much more.

Dustin Albino, Frontstretch.com: When you sat down to fill out you schedule for the season, why did you choose both Pocono events?

Natalie Decker: We wanted Pocono when we first made the schedule because we wanted three different racetracks. That’s why we picked Pocono, Road America and Toledo. And then, my sponsor wanted to add a few, and we really wanted to come back to a racetrack that we were at and Pocono was the only one we could come back to.

Decker: I’m really happy with everything and I met my goals that my crew chief and I made for us, each race. A top 10 today [Pocono]

would be our goal. If we could get a top 10 today [Pocono] we would have beaten our goals.

Albino: When you look at Venturini Motorsports, it’s one of the top organizations in ARCA. Why are you and this team the perfect fit?

Decker: Oh my gosh, I love them. The first time that I met the Venturinis was when Billy [Venturini, team owner] called me when I was at the PRI [Performance Racing Industry] show, which was a long time ago. But face-to-face and when I got to go to the shop and meet everyone was a little after Christmas time and I was like ‘this is so cool.’ It’s run by a family and that’s what I grew up with. My crew chief used to work with them, so it was just a perfect fit.

Albino: What do you hope comes out of this opportunity for next year and beyond?

Decker: I just want to keep moving up, and my goal is Cup one day. I know that the Venturinis can really help me with that.

Decker: Yes and no. There are no girls to be my friend because they are all guys here. That’s probably the hardest part. But everyone respects everyone, especially in ARCA. I respect a lot of these drivers because I raced against them in Super Lates. To come here and race against them, I’ve already raced against most of them.

Albino: Do you feel like you raced or treated fairly on the race track?

Decker: Yeah, for the most part.

Albino: How did competing in Late Models that prepare you for the ARCA Series?

Decker: Not at all. These race tracks are completely different than anything I’ve ever been to. The ARCA cars are not even close to anything I’ve ever driven. It was a huge learning curve from day one when I went testing with the Venturinis.

Albino: When you were growing up who were your role models in racing?

Decker: Yeah, I was a fan. Chase Elliott was in Super Lates [Late Models] when I was coming up and about to be in a Super Late. I was a big fan of him, and I really looked up to him. Matt Kenseth is from Wisconsin, so I’ve got to love Matt.

Albino: Travis Kvapil is from Wisconsin. What about him?

Decker: Yes and I really got to know Travis a few years ago. He came and raced one of the sister cars that I was racing. He’s really nice. I like him and his family a lot.

Albino: When you were younger, Danica was making a name for herself in IndyCar and now she’s the top female in NASCAR. Did you ever look at her growing up?

Decker: Yeah, my family knows her family very well. My dad used to race against her dad in sleds. I will always text TJ Patrick and be like ‘hey TJ, I need your advice on something.’ He’s almost like a second dad to me.

Albino: Who do you think has given you the most advice?

Decker: My dad raced, but he didn’t race a lot of cars. He did a lot of dirt racing. He gives me a lot of advice. My aunt doesn’t give me car advice, but advice outside of racing, which helps me coming back into the racing world.

Out on the race track, whoever is my crew chief at the time, my spotter, just really talks me through a lot.

Albino: Has anyone at the Cup level reached out to you for advice?

Decker: No, I’ve never talked to Chase. I’ve talked to Matt Crafton about qualifying because that’s one of my weak points. I’ve asked him to help me with my qualifying, and he said how he got better at qualifying was not to think about it and get into the car at the last minute and I tried it and it didn’t really work.

Albino: Is it intimidating to go up to those guys?

Albino: Your cousins, Claire and Paige used to race. How did you lean on them for help going into this season?

Decker: They aren’t racing anymore this season, so I don’t really talk to them much. But they do love to come and hang out and watch.

Albino: They used to race. So what’s it like to have three members of the same family around the sport at one time?

Albino: You are very active on social media, especially Instagram and Twitter. How do you use that to brand yourself?

Decker: Social media is like free advertisement, that’s the way I look at it. Whenever you can put something out there to show people and it gets shared just one more time than it would of then it’s always good.

Albino: How does it help with sponsorship?

Decker: It will help with sponsors in the future. Right now, I don’t have millions and millions of followers, but with where I’m at in my racing career, I’m not Chase Elliott right now. I don’t have his following base, but I still have 20,000 followers on my Facebook and I don’t even race ARCA full-time. I don’t race anything full-time that’s televised or really put out there. Where my following base is, it can grow even faster.

Albino: What are your goals in the remaining ARCA races this season that you will be competing in?

Decker: My goals for Road America and Kansas are all top 10s, and top 10 in qualifying.