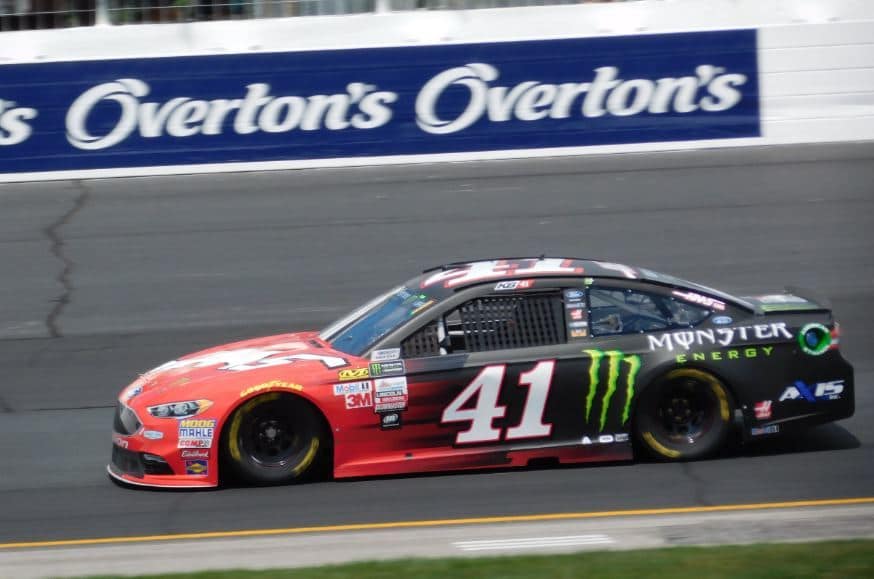 As first reported by Motorsport.com and NBC Sports, Kurt Busch‘s contract option with Stewart-Haas Racing will not be picked up for the 2018 season.

The team, according to the reports, has until midnight on Tuesday to reverse its decision and pick up the option.

However, that doesn’t necessarily mean Busch is out of the No. 41 for 2018. Shortly after the news broke, SHR’s official Twitter account tweeted that “we expect @KurtBusch back in our @MonsterEnergy / @Haas_Automation Ford in ’18. Just sayin’.”

We don't comment on contract status, but we expect @KurtBusch back in our @MonsterEnergy / @Haas_Automation Ford in '18. Just sayin'.

Busch joined the team at the start of the 2014 season and won his first Daytona 500 this season for SHR, currently slotting him into the playoffs in the Monster Energy NASCAR Cup Series after Richmond Raceway. In all, Busch has a win, two top fives and nine top 10s in 2017, putting him 14th in the overall point standings.

SHR currently fields cars for Busch, Clint Bowyer, Kevin Harvick and Danica Patrick in the series. Harvick and Bowyer are confirmed as two of its drivers for next season.

What the hell does that mean?

they probably want to renegotiate his contract for a lesser amount of money.

Bingo! I’ve always thought the driver’s pay should be based on what he wins in the car, not a salary. It might give them more motivation to pass the car in front if they took home more money. MOTIVATION!

Reading between the lines…..SHR has the option to keep Kurt driving for them at his current rate of pay next year. They choose not to exercise that option but that doesn’t mean Busch and the team couldn’t negotiate a new contract to keep the band together next year. By leaking this news Busch can let other team owners know he may be available and see what interest there is in his services next year. Meanwhile SHR can start the dance with other potential drivers who might need a seat next year. But still nothing on Danica. Busch did win the Daytona 500 this year. Then again he was reigning Cup champion when Roush axed him after that incident in Arizona.

i’m trying to remember, kurt busch has, more or less, stayed under the radar behavior wise, once that crazy patricia person left his life. and he is mr. monster cause he’s always had monster as a sponsor. he’s not even 40 yet. not that i’m a kurt busch fan, but i think he’s tamed down a lot. he’s not the same person he was when he and spencer got into it.

i would think princess sparkle pony would be the odd-person out at stewart-haas, as she has sponsor issues as well as the lack of performance, but hey, it’s not her fault. she’s had about as many crew chiefs as some drivers have had their entire careers.

i honestly thought menard was going to stewart-haas cause of the relationship stewart had with menards in his indy car days.

i wonder how involved tony is witih the nascar business now that he’s retired.

ding, ding, ding. Probably indicates there is some doubt whether Monster will stay as car sponsor. If they leave this team they are out as an individual car sponsor, right?

Bill B
Reply to  tcfromaz

No, I think you are thinking of 5 Hour Energy. Monster is the series sponsor so I would think they can do pretty much anything they want sponsor-wise. That doesn’t mean they won’t stop sponsoring a car though. Does the series sponsor really need to sponsor a car? They already have their name plastered on everything including every car and uniform.

No sponsors wanted Busch, and evidently Ford wasn’t willing to pay more, so “thanks for your hard work. We wish you the best in your future endeavors.” Now they can look for a driver that will bring in some cash.

I am indifferent to Kurt. I worry some genius will think it is a good idea to have the Unhinged (MO) Old Man Kenseth in the SHR car. I cannot for the life of me, seeing the stunt he pulled at Martinsville, have him back in the Ford fold, I just can’t. Rumor has it, it still is a huge sore spot with Roger, and Roger does carry some weight with Ford. I hope this has nothing to do with Kenseth. WIth SHR, however..who knows. Let that jerk retire and go shuttle his granddaughters…Oppsss sorry..”daughters of to kindergarten and first or second grade..whatever. MO of course.

How did you manage to bring Kenseth into this? His name has been nowhere in any credible discussion of who’s going where.

And in case you didn’t notice, after Matt schooled Joey on the consequences of not behaving nicely toward your fellow man, polls on how the fans viewed this were overwhelmingly in favor of Matt doing the right thing and brightening Joey up a notch of two. And Joey to his credit has taken the lesson well, he is a changed driver since that incident. Humility is a good thing at times.

Wow, yeah…o.k. sure. whatever…Laughable at best..and certainly missing the whole true crux of my post. Roger Penske has great sway with Ford. He did not forget that unprofessional insanity. It still bothers him, as it should. If you were an honest person, you would have seen Logano held his line, considering what Kenseth did for many laps before, Logano was more than patient. You are olddly silent on the Kenseth stupidity (again) wtih Newman, the week prior. Newman was not so nice and Kesenth again was the architect of his own demise, I believe it was a DNF!. People like you remind me of a 80 year old. IT CANNOT BE THE OLDER PERSONS FAULT IS IS ALWAYS THE YOUNG “PUNK” and Kenseth schooled Logano”, blah, blah, blah. The likes of your kind said “racing incident’ with Newman no doubt. Selective lecturing. memory and hypocrisy. Typical NASCAR FANATIC. Kesenth came down on Logano, Kenseth spun himself. DID NOT WRECK..finished 14th. But don’t let facts get away from your post. LOL.

Oh and Sollly, don’t even try and give me shit that I hate Kenseth because of Logano, I could not stand that jerk since before Logano was even in Cup…FACT. Anticipating the usual childish “you are just jealous”, “you hate so and so” “you love so and so”..NOPE..just stating the facts.

I think Kurt would be a perfect fit for the 77 seat. Just my opinion.

Not without bringing a ton of cash he isn’t. And if he had the sponsor cash he’d be better off at SHR.

Tom B
Reply to  Ken Smith

He’s already been on that team before and couldn’t wait to leave.