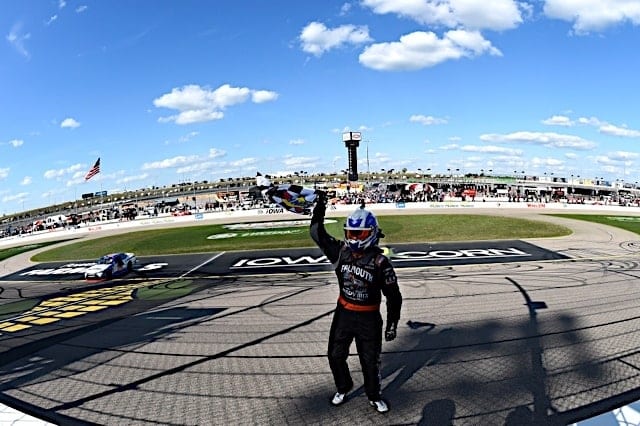 It sounds like an oxymoron, but when you have the likes of former Cup champions in Kyle Busch, Brad Keselowski, Kevin Harvick and others running almost every week, it makes those victories that much more special. But what Ryan Preece did this past weekend at Iowa Speedway was really special.

The New England native bet on himself and hit the proverbial jackpot. In two races for Joe Gibbs Racing, he earned finishes of second and first. I’m no mathematician (hence why I’m a journalist), but an average finish of 1.5 is pretty darn impressive, no matter how you slice it.

But Preece’s triumph at Iowa sets up what could be a precarious situation not only for himself, but the sport of NASCAR as a whole. He isn’t a “young gun,” although he’s only 26-years-old. He hasn’t been working his way through the lower series, winning championships left and right. But when he was put in the right equipment, he capitalized. However, as we all know, opportunities in this sport come down to dollars and sense. And for Preece, he’s hoping someone takes a chance on him in the future.

Q: Do you think Ryan Preece’s win will land him a full-time ride in XFINITY for next season? – Sean L., Seattle

A: Easy answer: it damn well should. But that isn’t how this sport works.

Harder, more complex answer: It’s going to take sponsorship, a vacant seat and a commitment from a team owner to put a driver with promise, but not an eye-popping resume, in the driver’s seat.

Preece brought sponsorship to the table in order to run these two races for JGR, so it’s not like JGR was begging Preece to come drive the No. 20 Toyota. Preece also is only scheduled to run those two races for JGR in the series. He had a lot of help from a lot of people to get to the race track in the first place and ultimately wind up in Victory Lane, and he was sure to thank them all.

In five Monster Energy NASCAR Cup Series starts, he hasn’t finished above 32nd. Of course he was running equipment capable of running 32nd at best. And in a full-time season last year racing in the XFINITY Series, he had one top-10 finish in 33 races. In two starts this season, a second and a first.

Why? Again, it’s simple: equipment and sponsorship. Preece’s ride last season was with JD Motorsports, an organization that is loads behind one like JGR. Preece struggled to run 25th every week with them, while his biggest worry driving for JGR was leading the most laps and somehow giving the race win away.

But in terms of what’s next, specifically in the XFINITY Series, he’s not sure what’s next, besides running his modified, where he has won a championship.

“I think it’s pretty easy to say that’s where I want to go,” Preece said of the XFINITY Series on SiriusXM NASCAR Radio earlier this week. “I wouldn’t be taking this chance to do what I did if I didn’t want to go there … I’m totally unsure, I don’t know. Pretty much, I won the race, I won the pole, and finished second at New Hampshire. I feel like I’ve done everything I’ve needed to do as a race car driver at this point. […] right now my schedule is back with the modified. (My owner has always told me) if something comes up you got to go for it. I’m just trying to make a name for myself and trying to get my name out there.”

This could be a make or break time for NASCAR. In a time where sponsorship means more than anything, Preece could possibly be a diamond in the rough. Target is leaving the brightest young star in the sport today in Kyle Larson. Teams are downsizing at a rapid pace due to lack of funding, and television ratings are really low. But if Preece can do it the old fashioned way, working his way up from local short tracks to the big time without any sponsors, and land a ride, it’d be pretty damn cool.

Q: Who wins the Sunoco Rookie of the Year battle between Erik Jones and Daniel Suarez? – Isaac P, Detroit

A: Last year’s Rookie of the Year battle was probably the best one in over a decade between Ryan Blaney and Chase Elliott. No disrespect to Kevin Conway, Andy Lally, Brett Moffitt and Stephen Leicht, but names and talents like Daniel Suarez and Erik Jones resonate more in fans’ minds.

I would honestly go with the No. 77 Furniture Row Racing team of Jones to win the battle right now. The Byron, Michigan native and 2015 Camping World Truck Series champion has six top-10 finishes on the season and has three in his last five events.

Suarez has seven top-10 finishes, one more than Jones’ mark, but has zero top-five finishes. He has been on a bit of a hot streak, though. In his last three races, he has earned a top-10 finish every time the checkered flag flew.

Jones knew he was going to be competing full-time in Cup for awhile. The official announcement came one year ago this weekend at Watkins Glen International. Jones had time to prepare for this season, while running for the XFINITY title in the process.

On the other hand, Suarez was thrown into the fire at the last minute. Carl Edwards’ abrupt retirement sent JGR into a frenzy of figuring out what to do. Suarez was fresh off a NXS title, and was put behind the wheel of the No. 19 for this season. He barely had any time to get acclimated to the series, team, workload and everything that comes along with jumping from XFINITY to Cup.

Both JGR and FRR have been among the class of the field week in and week out. And with the technical alliance between the two teams, fast race cars will keep being brought to the race track.

Both drivers are young and will be in this sport for awhile. Both drivers have won championships in the lower series (Jones in Trucks, Suarez in XFINITY), both have proved they can contend for wins early on in their Cup careers and both have a large fan base. Regardless of who is awarded the Sunoco Rookie of the Year award when the checkered flag flies in Homestead, both have a bright future.