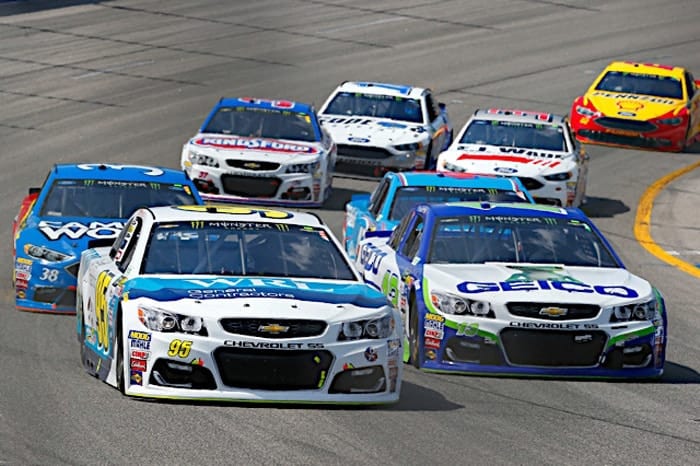 With Target pulling out of motorsports after this year, it leaves just two NASCAR teams on the circuit using a single primary sponsor for all 36 races. Jimmie Johnson‘s No. 48 has backing from Lowe’s (and Kobalt Tools, manufactured and sold by the store) while the No. 11 run by Denny Hamlin has FedEx.  That leaves other teams, large and small, with a patchwork of various backers for the year.

It wasn’t that long ago (about a decade) that most teams had one sponsor for the season, with maybe a couple of races sold to someone else.  It worked for fans because the cars were easily recognizable from race to race and because it made merchandising simple — one t-shirt covered all the events. But in the early 2000s, the sport’s massive popularity made the price to sponsor a team for a season skyrocket.

At the time, companies paid the premium; it was good advertising, fans were brand loyal and times were good.  $25 million was an investment that paid off in ROI and merchandise sales. But the recession coincided with the end of the NASCAR fad, one that left sponsorship in jeopardy.

In theory, though, less money should eventually help the smaller teams find a bit of parity.  If the big teams have to accept less for a sponsor deal than in the past, it will eventually control costs.  Teams in general won’t spend money they don’t have, and even an owner with exceptionally deep pockets can only carry an organization so far. If the big teams spend less, it allows the smaller ones to gain a little ground.

The other piece that, in theory, should happen is that as sponsorship prices drop, more companies can be enticed to pony up for a few races. And if a small team can provide value at a competitive price, that could be beneficial to all.

A good model of comparison would be the XFINITY Series in the 1990s, before the big teams and big sponsors took over. Back then, there were a lot of smaller companies who sponsored cars in that series because it was affordable and they had a fighting chance to get some airtime.  It was a win-win for everyone, including the sponsors who didn’t have the budgets to back a Cup team but wanted to be involved in the sport. If those companies could find value again, it would only be a good thing.

Of course, the broadcasts were different then too, with more wide-angle shots that showed more cars and more through-the-field coverage. That would have to change as well, as with networks competing to show fans new and different camera angles, simply showing the racing seems to have fallen by the wayside.

Still, if a shift in the sponsorship environment does happen, expect the small teams to benefit more than you think.

Top of the Class: Pocono II

This week’s race was tough on a lot of the small teams, but there were a few standouts.  Rookie Ty Dillon was the top driver among the underdogs, finishing 17th. He beat Michael McDowell by just one spot; that duo were the only ones in this group to finish inside the top 20.

Dillon’s finish was good, though he hasn’t been able to run with the other rookie contenders much recently (both Daniel Suarez and Erik Jones finished in the top 10 this week). Germain Racing has had some better finishes this season, and having Dillon in the seat makes a difference, particularly in the equipment and support the team gets from Richard Childress Racing.

McDowell has been quietly impressive this season as well. But he has really given an inkling of what kind of talent he has in recent weeks; the team has four top-20 results the last six races.  It’s likely that Leavine Family Racing is a tick behind Germain on RCR’s list, along with JTG Daugherty Racing. But they’re clearly making the best of their alliance.

I’m also going to toss Cole Whitt and Corey LaJoie into this category.  Whitt came home 24th and LaJoie finished 25th. A handful of others may have had better runs but this pair was impressive this week.  Whitt followed up his impressive 12th-place effort from Indianapolis with a 24th-place run that’s still, on paper, an overachievement for his tiny TriStar Motorsports effort that’s running in the wake of the loss of team owner Mark Smith last week.

LaJoie not only gave floundering BK Racing a finish it sorely needed, but he impressed as a driver Sunday.  LaJoie raced more experienced rivals aggressively and was able to run with them, if sometimes only briefly. But unlike earlier this season, was able to do it without incident. The race was a decent indicator of what LaJoie can really do if given the right equipment.

A group of drivers this week raced the track for strong finishes.  David Ragan, who had a rough week last weekend at Indy, finished a much more indicative 22nd this week.  Front Row Motorsports was a bit off their own pace from earlier this year, but have had some better runs recently. Luck’s been on their side as of late and Ragan delivered a good one this week.

AJ Allmendinger, meanwhile finished 23rd this week, right on his career Pocono average.  It’s a solid enough run for the team, giving them a little boost heading to Watkins Glen. That’s the race where Allmendinger is a former winner in the No. 47 and always a favorite to get a top finish.

Also having OK, if not great, runs this week were defending race winner Chris Buescher, who finished 28th and Landon Cassill, who finished 29th.  The numbers were serviceable for two drivers already looking ahead to build for 2018.

Gray Gaulding finished 31st in the No. 15 this week. While Premium Motorsports has been a bit driver-by-committee for both the Nos. 15 and 55, Reed Sorenson was overall the most solid driver they have had; this teenager slots in a bit behind him on track.

Speaking of Gaulding, his exit from BK Racing led to the interesting choice of Stephen Leicht in the No. 83 this weekend. Leicht’s most famous Pocono moment was the time he hit a groundhog in an XFINITY Series practice.  It did get his sponsor some airtime, but when that’s your most notable NASCAR moment… let’s just say Leicht didn’t hit anything this time around. Instead, he finished a ho-hum 32nd in his first NASCAR national touring series race in five years.

The other Premium Motorsports driver, Derrike Cope, suffered a transmission failure after 85 laps and wound up 34th with a DNF. Jeffrey Earnhardt’s engine expired on lap 24, relegating him to 36th. Matt DiBenedetto (37th) and Aric Almirola (38th) brought up the rear this week after a first-lap crash ended their day. Almirola wasn’t credited with completing a single lap in the race while DiBenedetto did manage to score one lap before his day was over.

Both Premium Motorsports and BK Racing will only bring one car to Watkins Glen this week.  NASCAR Pinty’s Series driver Gary Klutt will drive the No. 15 for Premium while Corey LaJoie pilots BK’s No. 23 with sponsorship from Super Donut.

Last week finishing 8th we were definitely the windshield. ? happens I guess

Ty Dillon shouldn’t be considered a small team, not with all the support and Menard money grandpa throws at it. Paul Menard addressed that when he answered some questions about why he was leaving. With Menard money gone from RCR next year, let’s rate the Dillon boys skills this time next year. Sponsor money is going to become a big problem for Richard.!

NASCAR sure is pushing the print media as well as the tv folks to mention Wallace as a possibility for every possible cup ride. Maybe he should win at least one xfinity race in the years he’s raced there. Smithfield hasn’t committed to Petty next year yet and yet Richard says he’s if love to field a second car with Darrell Wallace in it. In other words, you get the manufacturer and yourself to put up the money and I will put your diversity driver in it next year Nascar. NASCAR will buy that ride with some team next year for Wallace, that’s obvious. Isn’t that right Danica. But sponsors are getting scarce ,especially for someone who can’t win an Xfinity race.

Guess this is representative of how a chunk of Nascar’s fanbase view Wallace. Ignore the on-track performance filling in for Almirola on zero notice, while focusing on AM radio/Fox news talking points that have nothing to do with sport. Partly explains why the kid has trouble finding sponsors in this particular environment.

Supposedly he has a ‘rough’ personality that puts off corporate types. But personally, I’d be more than merely unpleasant if I had to put up with this stuff my whole career/life.