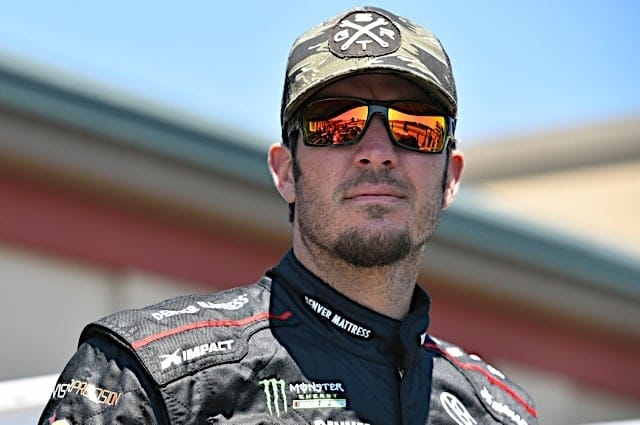 Martin Truex Jr. and Kyle Busch have not only been the class of the Toyota’s, but also the entire Monster Energy NASCAR Cup Series field in the past few weeks. With Busch’s victory this past weekend at Pocono, he is now guaranteed a playoff spot. Truex Jr.’s three race victories and 14 stage wins will also put the No. 78 in the playoffs easily.

Who is the current favorite to win the championship: Martin Truex Jr. or Kyle Busch?

All He Does Is Win

Domination and Martin Truex Jr.’s 2017 season are two things that are pretty synonymous, if you ask me. Truex is far and away the title favorite right now.

The Mayetta, NJ native has never been in equipment this strong, won this many races at this juncture of the season and had this legit of a shot to win it all.

When he joined Furniture Row Racing at the start of the 2014 season, FRR didn’t have a technical alliance with Joe Gibbs Racing, and that’s why Truex only garnered five top-10 finishes. Add a technical alliance and crew chief Cole Pearn to the mix and a real belief they could do it, and you have something special. Just like this season.

Truex and the No. 78 team are 3/1 favorites to win it all right now, according to VegasInsider.com. But at the end, what do odds mean? Not much. We know that a driver can get hot at the right time and ride the wave of momentum all the way to a championship.

Most recently? You could say Jimmie Johnson last season, as he won three races in the playoffs, including the season-finale when he hoisted his record-tying seventh Cup. But more so, it was the man I’m arguing against, Kyle Busch, back in 2015. Only competing in 25 races after recovering from a leg injury before the season even started, Rowdy went on an absolute tear and won it all.

Brad Keselowski got hot at about this time in 2012 and won it all, too. And who could forget the incredible battle between Carl Edwards and Tony Stewart back in 2011? Smoke was winning almost everything in sight, and wound up winning the title.

Could Busch’s win at Pocono set him up for a second title campaign? Sure. After all, he realistically could have five wins to date if it weren’t for bad luck, bad strategy and the interference from the racing gods.

But Truex has had the better, more consistent and dominating season. And the stats back it up.

The No. 78 Furniture Row Racing Toyota is the only car to run over 5,000 laps inside the top 15. Busch has just over 4,600. On restarts, Truex also has the best “fastest on restarts” statistic, which calculates the average speed on the first two laps of a restart. Busch is third. Truex is also No. 1 on speed late in a run. Busch is second. Early in a run? That’s right: Truex is first. Busch is third. Truex and Busch are also 1-2 in average running position, lap leaders and driver ratings.

I mean, he has 14 stage wins for goodness sake. FOURTEEN! I don’t think drivers, fans or anybody that follows the sport knew how big these playoff points would really be moving forward. But on top of Truex’s three wins (five playoff points each), he has 14 more thanks to stage wins.

He’s going to win the regular season points title, meaning he’ll get an extra 15 playoff points to carry with him along with his 29 he’s accumulated to date. He’s going to walk on into Homestead easily. He could hypothetically finish top 15 in every race in the playoffs, and still make the championship four.

So regardless of whether you think Truex or Busch will win it all, the numbers don’t lie. Both are taking this season by storm and will more than likely wind up battling it out at Homestead in November. And you can bet that if it comes to fruition, no games will be played on those restarts. – Davey Segal

Yes, Truex currently has more race wins and a substantial amount more stage wins than Busch at this point in the season, but there is still a long way to go.

How many times in the current elimination-style playoff format have we seen a team bust out to a huge point advantage and numerous race wins only to fizzle out at the end of the year?

At this point in the season last year, Keselowski and Busch led the series with four wins apiece. Neither one took home the Cup trophy because they peaked too early and fizzled out in the playoffs. In 2015, Johnson did the exact same thing. Before that, Johnson, Keselowski and Dale Earnhardt Jr. each tied for the most wins after the first 21 races and none of them won the title.

Meanwhile, the eventual champion has lurked in the shadows and did not peak until the pay window opened. Johnson won two races early last season, but did not visit Victory Lane again until he won three of the 10 playoffs races en route to his seventh championship.

Busch missed the first 11 races of his 2015 championship campaign due to injury, but came back with a fury. Kevin Harvick took the exact same approach as Johnson in his 2014 championship season.

My point is that just because everything seems to be going Truex’s way at this point in the season, do not conclude that he is a virtual lock as champion. Especially given that Busch finally broke through for his first win of the season. I imagine his Pocono Raceway win unhinged the floodgates and several more will follow.

Truex has two more wins right now, but Busch should have won approximately somewhere around eight or nine more times. Bad luck and strategy has prevented the No. 18 team from winning half the races in 2017.

I believe that Busch has now gotten all of the bad luck out of his system and will transform into the luckiest driver out there for the homestretch. With Busch being both, lucky and blazing fast, there is no way he will not win his second title.

The biggest obstacle for Busch to overcome will be the ginormous amount of playoff points that Truex has racked up through his many race wins and stage wins. The playoff points are the new plot point that could foil the past championship-winning trends.

The answer to Truex’s playoff points though is fairly simple though: win races. Despite all of the talk of playoff points, the format still favors the driver who can win in each round. Busch is a clutch enough driver to win when he needs to, hence his 2015 title despite missing 11 races and appearances in the Championship Four two years in a row.

I do not think I can say the same thing about Truex. The No. 78 Toyota won to move on past the first round last season, but choked in the second round. He was also able to point race his way into the Championship Four in 2015, but failed to win a single playoff race that year and did not do well at Homestead.

Unless an outside team can get its act together, the 2017 MENCS title should come down to Busch and Truex, and I would put my money on Busch coming out on top.

Besides, if Truex does seem to have an advantage heading into the playoffs, then Gibbs could just suspend the entire No. 78 crew to give his own car a better shot. Too soon? – Michael Massie

Oh please…tis a crapshoot. Look at last year..Carl Edwards dives down on Logano on yet another restart towards the end of the race..taking himself and Logano bascially out of the deal..and YIMMIE YOHNSTON with 10 or 11 laps to go..gets to tell the story of his 7 time!!!!! Come one..WWE FARCE! PURE BS!

Oh it is Kyle Busch now that Adam Stevens got the two tire changers suspended from the 78 team. It’s the only way they could beat that bunch. You know the old saying; If you can’t beat ’em, suspend ’em!

Moron. Tire changers do not win championships – except in the fantasyland known as FrontRetch (motto: WE HATE KYLE BUSCH!)

Certainly any bodies guess. Grab a beverage and get ready for the fun. Watch out for the unexpected, or the scripted finish.

I think it should be “expected scripted finish.”

Beware…”The Jimmie and Chad Show” is hiding in the grass waiting to pounce and my guess is ole KB will do something stupid, Truex and the boys don’t have it in them and Jimmie boy gets # 8. Re: Karl Edwards.