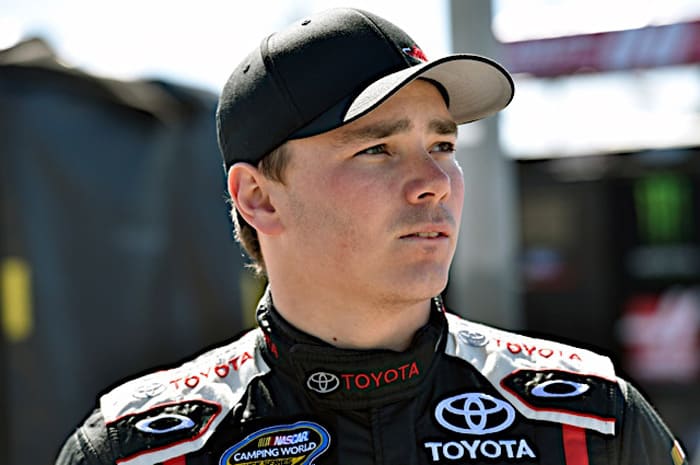 BK Racing announced Wednesday (Aug. 2) that Brett Moffitt will take the wheel of the No. 83 BK Racing Toyota Camry this weekend for the NASCAR Cup I Love New York 355 at Watkins Glen International, as well as next week’s Pure Michigan 400 at Michigan International Speedway.

Sponsorship at Watkins Glen will be provided by JAS Expedited Trucking.

Moffitt, the 2015 Cup Series rookie of the year, boasts 38 MENCS starts for a number of different team. He also has a pair of starts in the XFINITY Series and 13 starts in the Camping World Truck Series.  Much of Moffitt’s experience came in the NASCAR K&N Pro Series East.  Over five full seasons (2009-2013), Moffitt won nine races and earned 33 top fives and 44 top-10 finishes.

Moffitt started off 2017 full-time in the Camping World Truck Series for Red Horse Racing.  The team shut down after Charlotte Motor Speedway in May due to a lack of sponsorship.  At the time, Moffitt was 10th in points with two top-10 finishes.

“I’m very excited to be back in a Monster Energy NASCAR Cup Series car for the next two weekends, and I can’t thank BK Racing and JAS Expedited Trucking enough for making it happen,” said the 24-year-old from Grimes, Iowa. “I have only raced Watkins Glen once in a K&N car, but it was a great race and I finished third. I can’t wait to race the Glen in the No. 83 Toyota Camry this weekend and Michigan next week.”

BK Racing owner Ron Devine said he is pleased to have Moffitt onboard.

“I have been watching Brett display his ability to drive at the Cup level for many years,” Devine said in a press release.  “He is a big part of the Toyota family, and we are very excited to have him in our car for the next two races.”

Moffitt replaces Stephen Leicht, who drove the No. 83 last weekend at Pocono Raceway.  The move increases the entry list for Sunday’s I Love NY 355 at the Glen to 37 cars.