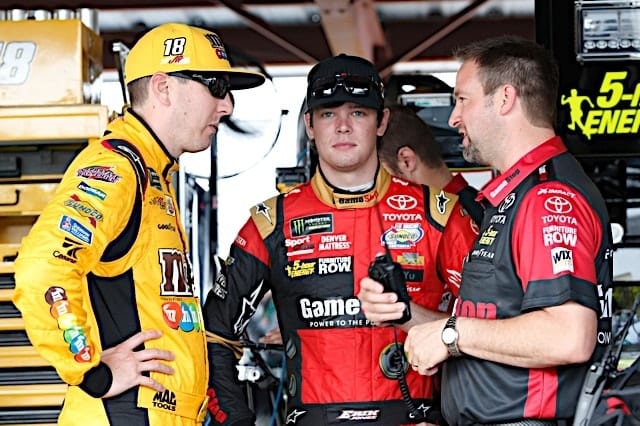 Wednesday saw NASCAR release the weekly penalty report.  For Furniture Row Racing, it was not a very good report.  Erik Jones‘ No. 77 team has been assessed an L1-penalty for an infraction found in post-race inspection after Sunday’s Overton’s 400 at Pocono Raceway.

The No. 77 Toyota Camry was found to have had improper arm spacers on its rear suspension layout.  As a result, crew chief Chris Gayle has been penalized with a $50,000 fine and a two-race suspension.  The No. 77 team has also been docked 25 owner points and 25 driver points after the race in which Jones finished eighth after starting ninth.

“The Truck trailing arm spacer / pinion angle shim mating surfaces must be planar and must be in complete contact with corresponding mating surfaces at all points and at all times,”  said NASCAR’s Post Event Penalty Report.  Jones’ eighth-place finish has been encumbered as a result of the penalty.

As of yet, there is no word from Furniture Row Racing as to whether they plan on appealing the penalty.  If they make an announcement in regards to an appeal, we will update this article.

In addition to the No. 77’s penalty, three teams were penalized for missing lug nuts.  Trevor Bayne‘s No. 6, Ricky Stenhouse Jr.‘s No. 17 and Kyle Busch‘s race-winning No. 18 were all found with one missing lug nut after Sunday’s Overton’s 400.  As a result, each team’s crew chief (Matt Puccia for Bayne, Brian Pattie for Stenhouse and Adam Stevens for Busch) were fined $10,000.

In the XFINITY and Camping World Truck Series, one vehicle from each series was found with a missing lug nut after the races on Saturday.  In the XFINITY Series, it was Roush Fenway Racing’s No. 16 for Ryan Reed.  As a result, crew chief Phil Gould has been fined $5,000.  In the Camping World Truck Series, it was the Halmar Friesen Racing No. 52 of Stewart Friesen.  Crew chief Trip Bruce copped a $2,500 fine.

How can a car pass pre-event inspection and not pass post-event inspection due to improper arm spacers on its rear suspension layout? What kind of inspectors do they have for the non-favourite cars? Then again, who’s surprised? It won’t happen to Erik next year.

Erik will just have to start winning. Then he can do a burn out that destroys all the fenders and suspension, cooks the engine, then jump on the hood and roof for good measure.