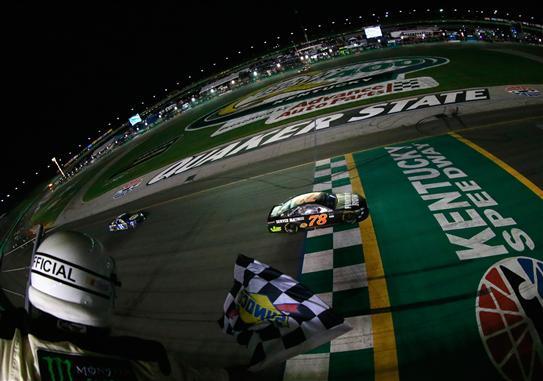 The start/finish line will now be the Overtime Line starting with the upcoming Monster Energy NASCAR Cup Series and NASCAR XFINITY races at Watkins Glen International.

Overtime begins if a caution is displayed before the leader of the race takes the white flag, or before the final lap has begun.

Much like the 2010-15 rules, the leader of the race now needs to complete a full lap in overtime under green-white-checkered conditions for the race to finish. If the start/finish (or overtime line) is not reached under green, another restart will then be attempted with unlimited attempts allowed. The race can end under yellow if NASCAR decides so.

The rule may have been changed as recent races have ended controversially in overtime. The race at Indianapolis Motor Speedway ended in overtime even though leader and race-winner Kasey Kahne hadn’t crossed the overtime Line as a wreck behind him, which took places just before the race ended, could have pulled out the yellow flags.

Previously, the overtime line was adjacent to the entrance to Turn 3 on ovals. To clarify the rule, NASCAR has dictated a new location – the start/finish line – which will stay the same regardless of whether the track is a road or an oval, though the line could still be moved at Talladega or Daytona.

“NASCAR has been looking at the Overtime procedure for quite some time,” said NASCAR Executive Vice President and Chief Racing Development Officer Steve O’Donnell said in a statement.

“After many discussions with key figures throughout the industry, we recognize that having the start/finish line serve as the standard Overtime Line position will benefit the race — and, most importantly, our fans. We are implementing this immediately, starting with this weekend’s races at Watkins Glen International.”

Too logical for NASCAR. They must have hired a consultant.

It is one of many sensationalist farces that Nascar has instituted, as GWC has been from day one. Thankfully the many REAL & integral categories I support don’t do this. They & I think more of sports integrity than to deprioritize it & make a mockery of their brand!

So Brian thought up the overtime line because the fans wanted it,right?

you know they were, “just listening to the fans.”

Just like Brian to always base all his decisions on what the fans want.