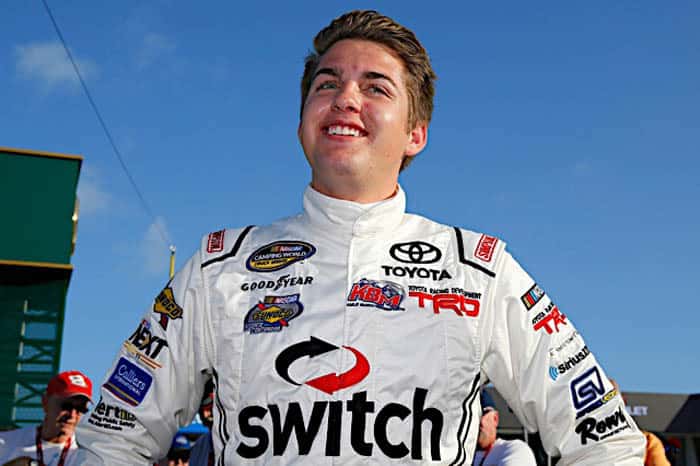 The 2017 Camping World Truck Series is filled with talented rookies attempting to get noticed and make a mark. Thus far, they have not disappointed.

In particular, Kyle Busch Motorsports is filled with young guns, led by second-year driver Christopher Bell. However, his teammate Noah Gragson, in his rookie tour, is in a similar position as the current Truck Series points leader was last year.

Gragson kicked off the season with a bang, literally, as he was involved in a second lap melee at Daytona. At Atlanta Motor Speedway, the No. 18 truck crossed the finish-line in 14th, while Bell dominated the event, sweeping all three stages. The 19-year-old showed promise at Martinsville Speedway by finishing fourth. But at Kansas Speedway, things went south as the clutch broke on his Toyota, dropping him to 13th in the championship standings.

Prior to last weekend’s race at Pocono Raceway, Gragson’s stock had been rising, after recording seven consecutive top-10 finishes between Charlotte Motor Speedway and Eldora Speedway.

“I’d say we are gaining on it little by little,” Gragson told Frontstretch. “We’ve obviously had a lot of speed. We’re really, really fast in practice and the track changes a lot with the handling and dirty air in traffic in the race. Just trying to figure out the balance in practice and making it good for the race has been my biggest thing.”

Led by veteran crew chief Marcus Richmond, Gragson had set out to accomplish a lot in his rookie campaign.  The Las Vegas native was replacing William Byron, who won seven times last season in his first year.

“Not really,” Gragson said of not living up to his own expectations. “I thought I would be a little bit better. It was kind of a rude awakening to be quite honest. I thought it would come a little bit easier for me because I had some success in the lower ranks, like the K&N stuff. Now, it’s all about preparation and Monday through Friday stuff. I’ve been trying to work hard with that.”

At this time last season, Bell was sixth in the overall championship standings, though picking up a checkered flag at Gateway Motorsports Park, assured him a playoff position. Gragson is coming to a lot of these tracks for the first time and has tried not to compare himself to other KBM drivers.

“A little bit, but you’ve got to remember how he [Bell] ran last year,” Gragson said. “He didn’t light the world on fire like he is this year. What William Byron did last year was special. He won a race before this time last year, so we still have to win, but we’re gaining on it.

“Getting a win would be huge to lock us into the playoffs. I feel like we’re close and we won a stage so far this year, but we’ve just got to keep on gaining on it. Obviously, we have the speed, it’s just I’ve messed up or the caution fell the wrong way or we got a flat tire and it’s kind of hurt us in the points.”

Kyle Busch, owner of KBM has competed against Gragson in five events in this season at the truck level. And though having 48 career victories in the series, the 2015 Cup Series champion has gotten the better of his rookie driver in only two of those events.

Busch is proud of the steady improvement Gragson has shown in 2017.

“I think Noah has progressed well,” Busch said. “It certainly started out shaky and rough at Atlanta and we had a practice spin at Charlotte and Kansas – can’t remember what happened, I think he was just kind of a little bit off the pace at Kansas – but he’s really good at the short tracks. Martinsville was good. Iowa was good. Gateway was OK; they had to start in the back because we had an issue under the hood that was our fault, but Kentucky was probably the most impressive to me. This is the second half of the year now. You’ve really got to show what you’re made of and win a couple times and get him ready for a championship season next year.”

Through 12 events Gragson has paced the field for 61 circuits, while spending over 75 percent of all laps inside the top 15. However, from the middle of the race on, his average finishing position jumps more than a full position.

Going into the home stretch of the season, Gragson feels as though he is getting closer and closer to Victory Lane.

“I think I’m getting better each week,” he said. “I’m getting more comfortable in the trucks and knowing what I need at the end of practices to get it tuned up for the race is the main thing right now, and learning how to race in dirty air and figuring out how to race around guys because it’s always constantly changing.”

Starting the year as an 18-year-old, Gragson has had to adapt on the fly as the NASCAR season doesn’t stop. Because of his success at the lower level of the sport that propelled him into the No. 18 truck, he thought he was ready to be a front runner.

Knowing now what he didn’t know before taking the ride, Gragson has had to prove to himself that he belongs.

“I don’t know if I was ready for it,” Gragson said of his opportunity with KBM. “I felt like I was ready just running the K&N stuff. But after the first truck race I was like ‘oh man, I don’t know if I actually am ready for this.’ I’ve worked hard Monday-Friday, watching film and getting better little-by-little.”

“We’re always looking at ways to enhance the racing but have to do it in a way that’s financially managable,” Elton Sawyer, NASCAR vice president of officiating and technical inspection said Monday on SirirusXM NASCAR Channel 90. “Gene Stefanyshyn and his group at the R&D are looking at some ideas. Engines are a high priority line item. We did a closed test a week or so ago and are gathering all the information from that. We’re hoping to have a major announcement in the next 10 days or so about what direction we want to go with that.”

The truck @ChaseBriscoe5 will drive is identical to the truck @keselowski's dad drove to his first @NASCAR_Trucks win at @RichmondRaceway! pic.twitter.com/XSDMHBCTdv

We ❤️ the purple AND this truck's inspiration, @AustinCindric! pic.twitter.com/E4JG1Uh2ub