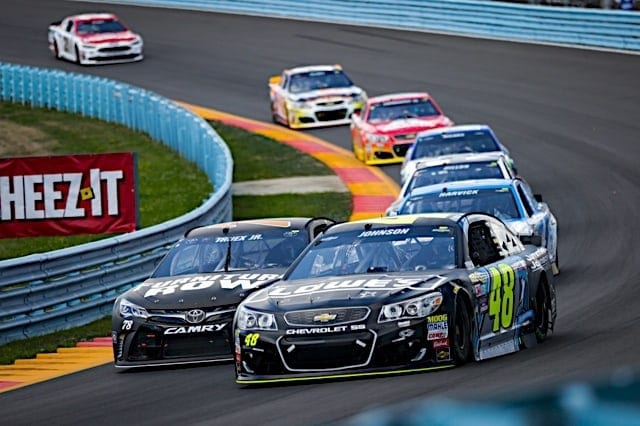 Add another rule change due to fan feedback to the calendar for 2017.

After a few trial runs of the overtime line, which stood as the line to end the race in an overtime finish if a yellow flag flied after it was crossed, the rule will now be forgotten.

As the Monster Energy NASCAR Cup and XFINITY series head to Watkins Glen this weekend, the rule will now return to the start/finish line. What is different now, and how could it affect Saturday and Sunday?

For starters, the line was simply moved from the sometimes-mysterious positions on the backstretch of each track to the line everyone knows and loves. Now, the racing is guaranteed to be judged off the position of the start/finish line, nice and simple.

A big change comes in the continuation of unlimited attempts at NASCAR overtime. Instead of the three-try deal from recent years, the field will have to complete a whole lap instead of half. This is where Watkins Glen could get interesting, as it is the sport’s second longest track at 2.45 miles.

However, overtime hasn’t been a reccurring theme at the New York road course, as only once has the race gone past scheduled distance since 2006.

Whether or not the change will impact this weekend, odds are we’re in for a great show of racing, as the Glen has become a fan favorite in recent years.

Will Max Papis Win in Stock Car Return in K&N?

There was some mid-week drama on Thursday, but yes, Max Papis will return to a stock car this weekend at Watkins Glen.

After the driver’s sponsor apparently pulled out for the race, a tweet from Papis Thursday afternoon quickly brought support from Sport Clips, who will back the Italian for his stock car return.

Now, the open wheel and sports car veteran will make his debut in the NASCAR K&N Pro Series East in Friday’s Finger Lakes Wine Country 100, racing for Martin-McClure Racing. After focusing on his works on steering wheels with Max Papis Innovations, he will now grab hold of one himself for his first stock car race since 2013.

All signs sure are pointing upward for the 47-year-old, who will race for the team who swept two of the three road course races in 2016 with driver Austin Cindric.

One of those wins came at the Glen, when Cindric won from pole position after leading flag-to-flag.

For Papis, there is experience abundant over the mostly inexperienced field for Friday. However, it’s been awhile. The last time Papis raced in NASCAR was 2013, when he competed in a Camping World Truck Series race at Canadian Tire Motorsport Park. Additionally, he ran three XFINITY races and subbed for Tony Stewart in the Cup race at Watkins Glen.

Though it’s been a solid four years, a little something new will sure to be something of old for Papis. The equipment is there, and we’ll find out if the drive for victory is, too.

Do Road Course Ringers Stand a Chance at the Glen?

The ringers are a little slim this year, huh? We’re guaranteed AJ Allmendinger each year, but outside of the competitive portion of the field, not a whole lot.

But don’t fear; there are those small, fun stories we can still watch for both Saturday and Sunday in Cup and XFINITY. Who knows, they could pull out a good finish if the day goes their way.

In XFINITY, we have four new or returning faces to the series. First is PJ Jones, the mid-1990s open wheel driver who is back after a six-year hiatus from NASCAR. His last start same at Sonoma Raceway in 2011 in a Cup car.

Before that, he got a hefty amount of stock car experience, running 32 races in Cup and XFINITY along with 18 in Trucks. His best finish was second to Ron Hornaday Jr. in 1995 in a Truck race.

The car he is racing is the No. 25 Chevrolet, usually piloted by Chris Cockrum on the plate tracks. A solid car for an experienced hand.

Next, Brian Henderson will make his XFINITY debut, driving the No. 90 for Mario Gosselin, the same team Andy Lally grabbed a top 10 for last year at Mid-Ohio Sports Car Course. Henderson, 20, raced in five K&N East races last year with a best finish of ninth.

Devin Jones will also make his series debut in the No. 07 usually driven by Ray Black Jr. In national NASCAR series, the 22-year-old only has one Truck Series start, coming back at Martinsville Speedway in 2013.

Josh Bilicki is back for his fourth career XFINITY race, driving this time for BJ McLeod Motorsports in the No. 8. He will pilot the car for all three road course races in 2017.

Turning to the Cup side, Gary Klutt is the new name on the block for the I Love New York 355, making his debut for Premium Motorsports in the No. 15. A struggling car and a first-time driver could be a tough pair for 90 laps Sunday.

However, that latter portion won’t be an issue with Circle Sport Racing with TMG, who has Boris Said back in the No. 33 for what could be the final time of his NASCAR career. The Saidhead faithful will have one more shot to pull for their boy, as Said has claimed he is likely to retire following Watkins Glen.

Lastly, Allmendinger is the sport’s road course ringer always. The 35-year-old blossoms on the road, especially the Glen. Winning at the track in 2014, ‘Dinger has led 50 laps in the last three races, finishing top 10 every year but one since 2010.

What is the Top Story Heading into F1’s Summer Break?

No race for Formula 1 this weekend. Or next weekend, or the one after that.

Yes, it’s the annual summer break for the worldwide motorsport, which will take four weeks to give the teams, crews, media and drivers time to spend more time with families and less time in a paddock.

Though there’s no racing for a while, there is plenty to look out for in the weeks to come.

The Hungarian Grand Prix saw Sebastian Vettel bump up the championship point lead over Lewis Hamilton, who gave up a podium finish Sunday to go by his word and give Mercedes teammate Valtteri Bottas his spot back after the Finn let Hamilton through early in the race.

Forfeiting another three points in the move, race-winner Vettel now has a 14-point gap on the three-time champion, with Bottas now within throwing distance of the top two, 19 points back in third.

The title hunt may be the hot topic as it should, but post-Hungary saw a short but colorful spat between drivers Kevin Magnussen and Nico Hulkenburg. In short, the two had a disagreement on track in the closing laps, with Magnussen telling Hulkenburg post-race to “suck his balls” after some unhappy comments from the German.

Though the F1 fandom has had its fun with memes and video compilations of the duo, it’s prime time to have some bad blood, with much time to ease the tension. In the championship, Hulkenburg has given Renault its best season, sitting 10th with 26 points while teammate Jolyon Palmer has yet to score a point.

That brings us to Palmer. His future has now been put on the side of a cliff, as Robert Kubica completed his first test with Renault in a 2017 car this week. Could the Polish driver, who hasn’t raced F1 since 2010, take over Palmer’s seat after the summer break? It may be looking more likely to come in 2018, instead.

A similar fate could befall Paul di Resta, who started his first race since 2013 when Felipe Massa missed Hungary due to illness. In his Williams seat, di Resta was only 0.8 off the team’s full-time rookie Lance Stroll and was running ahead of Sauber before a forced retirement 10 laps from the finish.

The cousin of IndyCar champion Dario Franchitti may even have an opportunity in 2018, as Williams is open to a future drive with the Scottish driver.

The sport has a lot to work out before the lights go out on Aug. 27 for the Belgian Grand Prix, a fan favorite from Spa Francorchamps Circuit.

Your math skills are lacking, yes Talladega is the longest at 2.66 miles, but Indy, Pocono & Daytona are the second longest tracks at 2.5 miles each…. Watkins Glen is only 2.45 miles THIRD in length!!