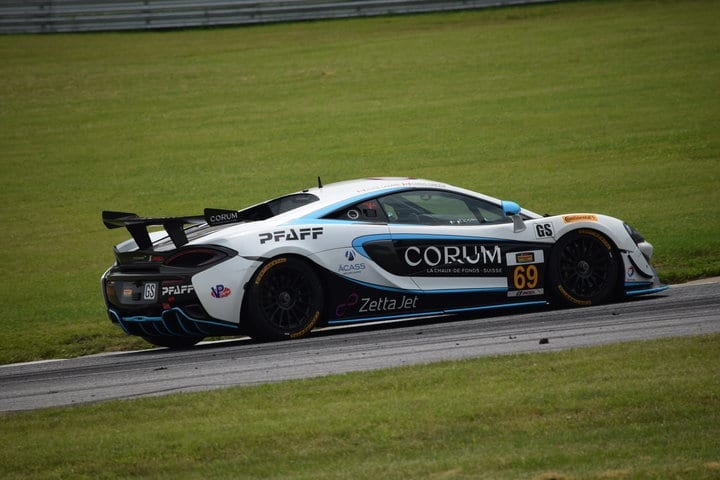 Unlike those competitors in the IMSA WeatherTech SportsCar Championship, Continental Tire SportsCar Challenge teams got a second helping of the wet stuff on Friday.  After another trying session, Motorsport in Action’s Chris Green‘s final lap of the session was fastest with a lap of 156.494 seconds (93.120 mph).  The lap was six-tenths of a second slower than the best lap posted in the first session by Gabriele Piana.

Green’s lap was only 14-thousandths of a second faster than Stevenson Motorsports’ Matt Bell in the sole Chevrolet Camaro GT4.R on site.  Piana was third quickest, fastest of the Porsches.  VOLT Racing’s Alan Brynjolfsson was fourth fastest, followed by CJ Wilson Racing’s Till Bechtolsheimer.

For TeamTGM, the beginning of practice No. 2 marked the end of their weekend.  Guy Cosmo drove out of the pits on his out lap, but didn’t even make it to turn 2 before heck went down.

The result of that snapping was that Cosmo spun through the runoff and hit the tire barrier.  The car climbed the barrier and rolled onto its roof.  While Cosmo was uninjured in the crash, the car was damaged beyond repair at the track, forcing TeamTGM to withdraw.

In Street Tuner, Freedom Autosport’s Andrew Carbonell was fastest with a lap of 164.103 seconds (88.802 mph), best of the day in the class.  Carbonell’s lap was a quarter of a second faster than Drake Kemper in the Bodymotion Racing No. 31.  Murillo Racing’s Jeff Mosing was third quickest, but a full second off of Carbonell’s time.  Christian Szymczak was fourth quickest in his Mazda, followed by Chad McCumbee in the No. 25 Mazda for Freedom Autosport.

The rain was quite heavy at times during the session, forcing a red flag at one point due to near impassable conditions.  As a result, only two teams managed to complete 10 laps in the session.

Three teams did not set times in the session.  One was the No. 4 TeamTGM Porsche, which Cosmo crashed before he could start a timed lap.  Once again, the CRG-I Do Borrow Nissan failed to set a time, along with the Automatic Racing Aston Martin of Charles Espenlaub and Charles Putman.